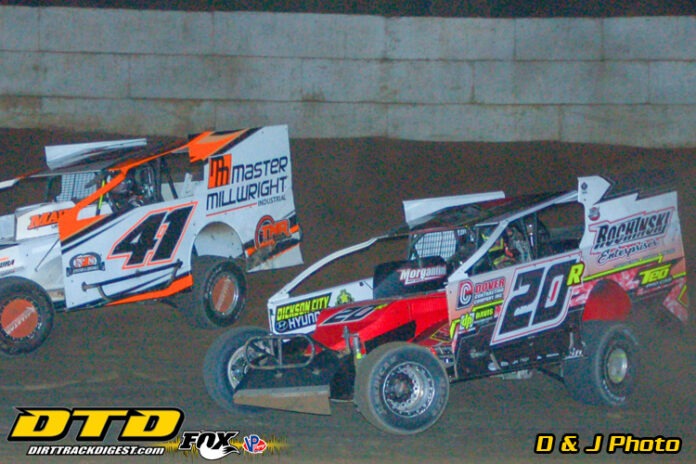 KIRKWOOD, NY – Nick Rochinski became the first Sunoco Modified feature winner of the season at Five Mile Point Speedway on Saturday. The victory in the 30 lap feature event was worth $1,200. Ray Leonard was the Insinger Performance Crate Sprotsman winner and Doug Polhamus emerged the winner of a phenomenal Street Stock main event.

Glenn Knapp and Brandon Fritsch led the twenty-two car Sunoco Modified starting field to Jim Olin’s green flag. The race got off to a rough start as the caution flew without a lap being filed. A chain reaction incident brought out the yellow as Corey Lowitt, Barry White and point leader Brett Tonkin were all part of the caution. On the restart another caution would fly before a lap was logged. This time Justin Andrews wound up facing the wrong way on the homestretch. When racing resumed the action was nothing short of spectacular. Knapp raced out to the lead as Brian Mady immediately hustled from third to second. Brad Szulewski Brian Puckett and Rochinski filled the top five during the early going. Rochinski was using the extreme outside of the speedway as he moved from ninth to fifth in only two laps.

The caution flew again on lap 6 for an “inadvertent yellow” as the field got crossed up but ultimately there was no incident. Both Randy Green and Art Bray pulled to the pits during the caution period. On the restart Mady utilized the outside line to vault past Knapp for the race lead. Szulewski continued to run in third at this point as Rochinski was up to fourth and Frank Yankowski had now broken into the top five. Once out front Mady opened up his lead over Knapp. By lap ten Yankowski had worked past both Szulewski and Rochinski and up to third place. Meanwhile back in the pack Brett Tonkin was making a charge from the rear of the field for the third time this season.

As the race was one third over Rochinski went back to the top of the speedway and wasted no time in using it to his advantage. Rochinski moved from fourth to second in two laps and now had race leader Mady in his sites. On lap 13 Rochinski powered around the outside of Mady and into the race lead. One lap later Yankowski advanced to third place as Justin Holland broke in to the top five. Once out front Rochinski grew his advantage quickly over the field. By the mid-way point Tonkin began to utilize the cushion and had charged all the back up to fifth from last. The final caution of the race flew on lap 19 as Aleia Geisler stalled in turn 1. Scott Landers was also collected in the incident as both had strong runs going. Both were able to continue.

On the restart Rochinski immediately opened up a sizeable lead over the pack. Mady and Yankowski hooked up for a great battle for second as Tonkin worked the outside moving past Knapp for fourth. On lap 25 Tonkin took over third and only lap later had advanced to second. By this point Rochinski had opened up an unsurmountable lead over Tonkin. Tonkin did close the gap over the final laps but Rochinski went on unchallenged. At the finish it was Rochinski, Tonkin, Mady, Yankowski and Holland breaking into the top five. Knapp finished sixth with Brian Malcolm advancing from thirteenth to seventh. Joey Colsten, Szulewski and Barry White rounded out the top ten finishers. Heat winners were Knapp, Colsten and Fritsch.
Ray Leonard became the sixth different winner in six regular season races in the Insinger Performance Crate Sportsman division. Matt Sobiech and Leonard led the field to the green in the 25 lap feature event. It was third place starter Matt Brewer though that took command on lap 1. Dominic Roselli hustled from fourth to second at the start as Leonard ran the outside of the speedway and began to dial in his line. There was great side by side action during the early going as Leonard used the outside to charge past both Roselli and Brewer for the race lead on lap 4. Gary Smith moved from fifth to third place during this exciting battle up front.

Once out front Leonard would not be denied. Brewer remained within striking distance throughout but was never able to mount another serious threat to regain the race lead. Leonard was impressive as he went on for win number one of the regular season and kept the different winner streak alive at six. Brewer wound up second with Gary Smith, Roselli and Blaine Klinger completing the top five. Bryce Bailey, Tighe Sherlock, Randy Brokaw, Dan Solomon and Sobiech completed the top ten. Heat winners were: Brewer, Sobiech and Leonard.

The 20 lap Street Stock feature event was an outstanding event with point leader Doug Polhamus taking the top honors. Teammates Nick Robinson and Gene Sharpsteen sat on the front row for the 20 lap feature event. Robinson raced out to the lead with Doug Stack, Sr. quickly making his way up to second place and Polhamus following his lead and taking third. Sharpsteen settled into fourth place as a tremendous battle immediately developed up front. Robinson and Stack battle lap after lap for the race lead as Polhamus waited for any error. As the race hit the halfway mark Polhmaus joined the battle and made it a three wide race for the lead. Stack dropped back to third as now Robinson and Polhamus switched lines for several laps with Robinson never relinquishing the lead. With only five laps to go Polhamus committed to the outside line and on lap 17 he was able to work past Robinson for the race lead. Polhamus would be followed across the line by Robinson, Stack, Sharpsteen and Doug Stack, Jr. For Polhamus it was win number four of the regular season. Heat winners were Stack Sr. and Polhamus.

Racing continues this Saturday with the 57th running of the Heath Memorial. The race honors the memory of track builders Irving and Anna Heath.