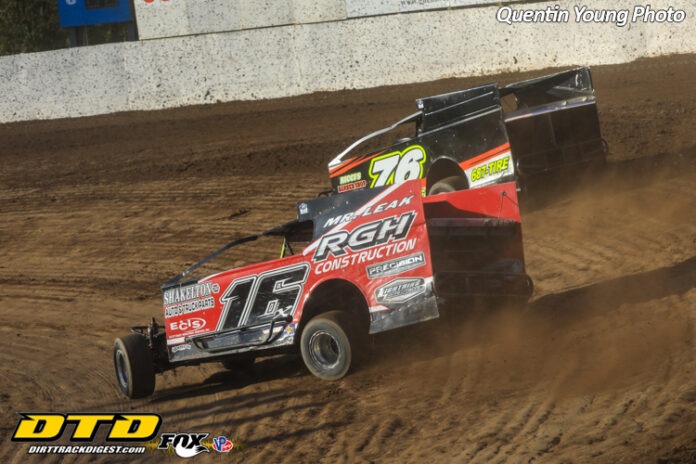 Brian Malcolm and rookie Bobby Puckett, Jr. sat on the front row for the start of the Sunoco Modified 30 lap feature event on Saturday. Malcolm immediately shot out into the race lead at the drop of the green as Scott Landers hustled from third to second. Nick Rochinski wasted no time with his advance forward as charged from sixth to third in just 3 laps. The first caution of the race flew on lap 6 and on the restart Landers used the outside line to take over the race lead from Malcolm. Unfortunately, the caution flew again one lap later. Landers opted to restart on the outside but this time Malcolm was up to the task as he regained the race lead. Rochinski again wasted no time as he went to the outer limits of the speedway to take over the lead on lap 9.

On lap ten the top five consisted of Rochinski, Malcolm, Creeden, Landers and Justin Holland. Rochinski quickly opened up his advantage as Malcolm and Creeden battleld for the second slot. Back to back cautions flew on lap 14 and Scott Landers, Barry White and Art Bray all retired from competition. When the green flew again the top three remained unchanged but now Brian Puckett was up to fifth after starting in fourteenth. Brett Tonkin had also made his weekly pilgrimage from the 22nd starting spot to advance up to sixth at this stage. Tonkin broke in the heat race resulting in him starting deep in the field again. The race would go on for the longest green flag stretch of the event with Rochinski able to open up a big lead over Malcolm. On lap 18 Creeden took to the high side of the speedway and moved past Malcolm for second place. Creeden now had the outside line dialed in as he began to close in on the race leader every lap.

Rochinski was slowed by lapped traffic and Creeden was able to take advantage. With only a lap and a half remaining Creeden worked past Rochinski as the duo navigated traffic. The caution flew on lap 29 for the final time and set up a one lap dash for the win. When the green flew Rochinski stayed close but couldn’t make a solid bid to regain the lead. Creeden went on for the win with Rochinski finishing second. Malcolm, Holland and Brian Puckett completed the top five. Tonkin, Frank Yankowski, Brad Szulewski, Glenn Knapp and Aleia Geisler completed the top ten. Geisler rebounded from twice having to pit for a loose sail panel and restarting last. Heat winners were: Yankowski, Malcolm and Creeden.

Bryce Bailey and Ray Leonard brought the Insinger Performance Crate Sportsman to the green flag in their 25 lap feature event. Leonard, fresh off a victory on July 10th immediately utilized the outside line at the start to take the lead and he never looked back. Two early race cautions on lap 4 slowed the action but the balance of the race went with only one caution. Leonard led every lap enroute to the victory. Bailey had another solid run finishing second. Brandon Loucks made his first regular season start and finished third with Dominic Roselli and Seth Zacharias completing the top five. Point leader Gary Smith finished sixth with Australian driver Zac McDonald finishing seventh in his first appearance at the speedway. Randy Brokaw, Nick Plumstead and Mike Nagel, Jr. completed the top ten slots. Heat winners were: Plumstead, Brokaw and Gary Smith.

The 20 lap Street Stock feature saw an outstanding battle for the entire 20 laps between Gene Sharpsteen and Jason Butler. Sharpsteen led the first seven laps but Butler utilized the outside line to take the race lead on lap 8. The duo ran side by side the entire race as they battled for the win. Butler was able to hold off Sharpsteen for his first victory in several years. Nick Robinson drove the Sharpsteen back up car for a third place finish. Mike Williams made his 2021 debut and took home fourth. Doug Stack, Jr. finished fifth. Heat winners were Sharpsteen and Butler.

The 20 lap S.W.A.T Exterminating Factory Stock feature saw Daniel Stevens and Kevin McDonald on the front row for the start. McDonald raced out to the lead at the drop of the green flag and looked to be the guy to beat. Justin Slezak, who started eighth quickly emerged as his biggest early challenger as he raced to second by lap 3. Slezak had missed his heat race after a water pump broke in practice forcing him to start in the back row. The top two hooked up in a great battle for the lead as they ran side by side for a number of laps. Kurtis Stickle ran back in third place as he made his 2021 debut with a new car. Stickle was within reach of the leaders but sat back waiting for a mistake out front. That mistake occurred when McDonald and Slezak made contact. The duo kept racing but on lap 16 both headed pit side with flat tires. This put Stickle in the race lead, one he would not relinquish. For Stickle the victory would be his first of 2021. Charlie Towner, Justin Slezak, Blake Furman and Daniel Stevens completed the top five. Charlie Towner was the heat winner.

James Randall recorded the win in the 20 lap 600 Modified feature. Randall took the lead on lap 7 and was never seriously challenged through the remainder of the event. Travis Rooney took a wild ride on lap 2 as he flipped on the homestretch bringing out the red flag. He was uninjured but done for the night. For Randall the victory was his first of the season. Eli Akshar, Bob Hamm, Jason Sullivan and Chelsea Beebe completed the top five. Heat winners were James Randall and Chelsea Beebe.

The 20 lap Futures Crate Sportsman class saw Matthew Backus lead all 20 laps for his third victory of the season. Backus started second by virtue of the redraw. He was followed across the line by Kyle Smith, Dale Folejewski, Joe Buchanan, Ryan Zelosko. Heat winners were Adam Gilbert and Dale Folejewski.

Austin Slater led all 12 laps of the FWD Four Cylinder Novice feature event on Saturday. For Slater it was his second victory of his career and the season. Shaun, Furman, Colbie Lockwood, Jim Backowski and Lucas Plaistead completed the top five finishers. Bethany Gilbert and Scott Beach were the heat winners.

COUNTER POINTS…The region saw rain move in late in the evening but the entire program was completed prior to the rain falling…A few light showers did not slow the racing program…Danny Creeden became the fifth different Sunoco Modified winner in six races…Only Nick Rochinski has repeat wins in the division…Brett Tonkin is the current point leader despite not having a feature win…For the fourth time this season Tonkin had to come from beyond 20th position to make his way forward this time settling in for 6th …Brian Puckett also had a good run from 15th to 5th…Saturday was an added racing program after rainouts and a limited 2021 schedule…All teams were awarded 25 show up points and it was a draw/redraw format…The entire evening saw entertaining racing in every class…Travis Rooney took a wild wide in the 600 Modified feature as he came together with another car on the homestretch and went end over end…Fortunately, he emerged uninjured…Racing continues this Saturday with the 57th Heath Memorial…