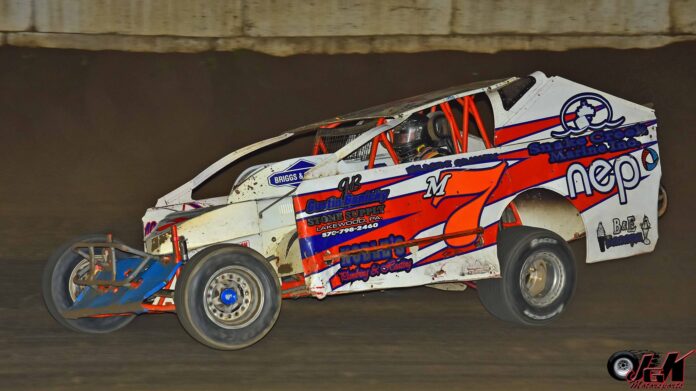 KIRKWOOD, NY – Mike Nagel, Jr. raced from the tenth starting place to win race number three of the Fall Series at Five Mile Point Speedway. The victory was the GRIT Series finale and with the win Nagel secured the 2021 GRIT Series Championship. The victory was worth $1,000.

Jimmy Zacharias and regular season Futures Sportsman Champion Adam Gilbert started on the front row for the 25 lap Insinger Performance GRIT Series finale. At the drop of the green Gilbert looked like a veteran in the division as he bolted out into the race lead. The one and only caution of the race immediately flew on lap 1 when Blaine Klinger slowed in turn one and headed to the pits. The race would go caution free the rest of the way. When the green flew again Gilbert again outpaced Zacharias for the race lead. Amazingly, Nagel utilized the extreme outside to move from tenth to second place in just a lap as the majority of the field ran the bottom of the quarter mile during the early going.

Gilbert set the early pace in only his second start in the division as Nagel settled into second and Zacharias ran in third. Gilbert was also working the outside line as he maintained his race lead. The outside was the quick way around but with Gilbert running the top Nagel now took to the inside looking to gain momentum. On lap 8 Nagel slipped underneath Gilbert and into the race lead. Nagel quickly opened up his margin as Gilbert now had a great side by side battle with Zacharias. This allowed Rusty Smith to join the race for second and third. Brad Weaver was securely in the top five at this point as he charged from his twelfth starting position. As the race approached the halfway mark Zacharias and Smith worked under Gilbert for second and third as they continued their own battle. Nagel took advantage as he continued to open his lead up over the field.

On lap 18 Smith made his was past Zacharias and set his sites on Nagel for the race lead. The top five continued to mix it up as the laps wound down. Over the remaining five laps Smith was able to close the gap on Nagel but never got within striking distance. Nagel took the victory after a flawless run and in the process locked up the GRIT Series Championship. Smith finished second and Jimmy Zacharias was third. Brian Malcolm finished fourth and Gilbert wound up with a solid fifth place finish. Brad Weaver’s charge forward from deep in the field netted him sixth at the checkers with Scott Landers, Craig Whitmoyer, Seth Zacharias and Ray Leonard completing the top ten. Six of the top ten drivers in the finish all have extensive Modified experience as the field was certainly talent filled. The final 24 laps were caution free.

Abe Romanik and Dustin Maynard led the Street Stock field to green in their 25 lap feature event on Saturday. Maynard utilized the high side of the quarter mile to take command at the green. Jerry Lobdell, who had won the first two Fall Series races was on the move early from his fifth starting slot. Lobdell has been fast all fall using the low line around the speedway and this worked to his advantage again on Saturday. As Maynard was pounding the cushion through the turns Lobdell worked to the inside on lap 4 and took over the race lead. Maynard tried to keep pace as Romanik ran in third and Matt Roberts was advancing now from his sixth starting spot. Unfortunately, Roberts was sidelined with mechanical issues on lap 6. The caution restacked the field and now Josh Butler was back on the move after pitting on lap 1. Out front Lobdell set a torrid pace as Maynard and Butler now raced for second with a great battle taking place between Romanik, Mike Wilbur, Brett Spoor and Dave Stalker. On lap 21 the caution flew for the final time as Maynard unfortunately slowed with a right rear flat tire. He was able to pit and return. When racing resumed Lobdell remained in command as Butler tried to stay close. When the checkers flew it would be Lobdell going “three for three” in the Fall Series. Butler finished second with Romanik finishing third. Maynard charged back to fourth at the stripe with Spoor rounding out the top five.

The 20 lap Factory Stock feature event was a wild one as several drivers looked to be first time ever winners. When it was all said and done it was a familiar face in victory lane with a different car number. Rick Sinsabaugh led the first lap of the feature event with Casey McPherson taking over on lap two. McPherson in his station wagon bodied car looked strong as he held the point during the early going. Sheldon Whitman was on rails in the early going as he charged from ninth to second place by lap 4. Unfortunately for Whitman his strong drive came to an end on lap 10 as he slowed with mechanical problems. McPherson continued to show the way around the speedway as Carter Bixby ran in the second slot. Two-time Track Champion Justin Slezak was now up to third place by this point and started to work on Bixby for second. The final caution of the race flew on lap 12 when Kevin Welch slowed in turn four. On the restart Slezak applied the heat to Bixby as McPherson tried to extend his margin out front. On lap 15 Slezak moved into second and slowly closed in on McPherson for the lead in a rare sight as both cars are station wagon bodied. On the final lap the leaders came up on the lapped car of Rick Glover. McPherson lost his momentum as he decided whether to go high or low. This opened the door for Slezak who took over in turn 2. Bixby followed Slezak through the hole as McPherson dropped to third. At the finish Slezak took the win with Bixby and McPherson close in tow. Glenn VanCise had his best FMP finish in fourth and Brandon Conklin finished in fifth.

The 20 lap Futures Sportsman feature race saw Lance Hill and Chuck Culbertson lead the field to green. Culbertson immediately took the lead at the start using the high side around. Matt Martino ran in second during the early going as he and fourth generation driver Gordon Smith had a great battle. Smith, in only his second Futures start, took over second on lap five. Culbertson was fast but was unable to shake the youngster during the first half of the race. Smith remained close and on lap 15 he was able to take over the race lead. Once out front, Smith ran a seamless race enroute to his first Futures victory. Culbertson, Martino, Ned Fitch and Brady Cordova rounded out the top five. Like the Crate Sportsman feature, only one caution slowed the action.

Kenny Harris took the top honors in the GRIT 600 Modified Tour Finale. Harris took the lead at the start only to relinquish it to Brett Gray on a lap 8 restart. The duo had a great race throughout and on a lap 18 restart Harris returned the favor as he recaptured the lead and went on for the eventual win. Harris was making his first start in the 2021 Fall Series. He was the 2020 Fall Series Champion. Gray finished second with Brenton Miller, Ali Scutt and Larry Furman completing the top five. Miller charged from his thirteenth starting spot to third at the finish and in the process locked up the GRIT 600 Modified Tour Championship.

Feature winners earlier in the day included Rich Wagner in the Front Wheel Drive Four Cylinder Experts. The race also served as one of the “Fantastic Five” races for the division and the victory was worth $500. Dave Simms looked to be on his way to victory when he tangled with the lapped car of Jeremy Trunzo resulting in Simms spinning. Wagner took over the lead and never looked back on his way to the win. Austin Slater took the top honors in the Front Wheel Drive Four Cylinder Novice class with Josh Landers scoring the win in the All-Star Slingshots and Avery Decker taking top honors in the Junior Slingshots. The MVVDMS Fall Frenzy for Vintage Cars saw a big turnout. Feature winners were: Andy Cassel (Modifieds), Stephon Denton (Sportsman), Carl Cram (Mystiques), Les Smith (Late Models), Jimmy Fugel (Antiques).

COUNTER PONTS…A miserable damp and cold weather day didn’t dampen the spirit of the huge number of race teams on hand Saturday…Despite a 45 minute rain delay in the early evening all of the racing was completed by 9 p.m…All of the divisions did a great job as cautions were rare throughout the racing program…The 2021 finale is this Saturday, October 23rd with the Bobcat of Binghamton Fall Series Finale including the $2,555 to win Great Crate Race for Crate Sportsman…