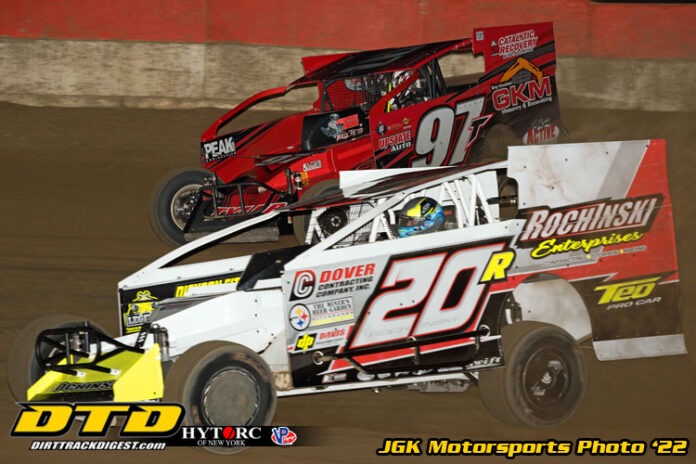 Rochinski and P.J. Goodwin sat on the front row for the 30 lap feature event. Rochinski immediately raced out into the lead at the drop of the green flag. Danny Tyler quickly advanced from his fourth starting position up to second place in just one lap as three wide racing was commonplace during the early going. The first caution of the race flew on lap 8 with P.J. Goodwin suddenly slowed while running in fourth place. He was able to refire the car but went to the back of the field to sort out the issue.

When the green flag flew again Tyler appeared to be a real factor on the far outside of the quarter mile oval as he tried to work past Rochinski. The caution flew only one lap later when Kenny Hammond slowed in turn three. On the restart Rochinski opted to start the race from the inside row and Tyler was dialed in on the outside as the duo battled tooth and nail. Two more back – to back cautions on laps 12 and 13 slowed the action but the battle for the lead was not over. On the lap 13 restart Tyler got an outstanding run on the outside. Rochinski moved his line up and on lap 15 Tyler dove underneath for the race lead. The lead was short lived as Rochinski rallied back for the lead on lap 16 as great racing took place throughout the field.

By lap 20 the top five consisted of Rochinski, Tyler, Jimmy Zacharias, Brett Tonkin and Dan Creeden. Creeden, the only three-time winner of the event had started twelfth. On lap 22 the caution flew as Rusty Smith slowed on the speedway. On the restart Tyler left it all on the outside as he again powered alongside Rochinski for the race lead. In turn three Tyler jumped the cushion and slammed the foam blocks bringing out the caution. He was able to pull away along with a lot of foam wedged in his car. After pitting to remove the foam, he did return to the speedway.
The final seven laps went caution free and Jimmy Zacharias was locked on the bottom of the speedway and looked to make a bid for the win on Rochinski. Just as Zacharias closed in Rochinski was able to pull back away for the victory. Zacharias had his best career Modified finish at FMP with the runner-up slot. Brett Tonkin wound up third with Dan Creeden and 2003 Modified Track champion Dan Vauter finishing fifth.

Rochinski made a statement with the victory after coming off a second place finish in the final 2021 Modified point standings. Tonkin, the 2021 Modified Track Champion ran his usual consistent race with the third place effort. Heat winners were: Tonkin, Rusty Smith and Pat Ward. Rochinski also collected a $250 bonus as the top finishing driver from the area Southern Tier Modified Tracks courtesy of Signworks Fleet Graphics. They also put additional money up for the third place finisher in the 30 lap feature.

The Crate Sportsman 20 lap feature event found Matt Brewer and Gordon Smith in the front row for the start. Brewer took the initial lead with 2020 Fall Championship Series Titleist Tyler Johnston running a close second. Three cautions in the first three laps slowed the action. Johnston was the race leader by lap 3 as Brewer ran a close second. After the early cautions the race went caution free until lap 14 with Johnston still maintaining his lead. Johnston went on to lead the final 6 laps for his first win of 2022. Brewer had a solid run for second place. Alex Knopka, Gordon Smith and Brad Weaver completed the top five. Wayne Brewer donated $100 for a Hard Charger Award in Memory of Ray Ayers. Ayers passed away on Wednesday of this past week at the young age of 44. He had been a long-time crew member and recently teamed up with Brian Decker as a car owner in the Crate Sportsman division. Matt Martino was the Hard Charger in the 20 lap event.