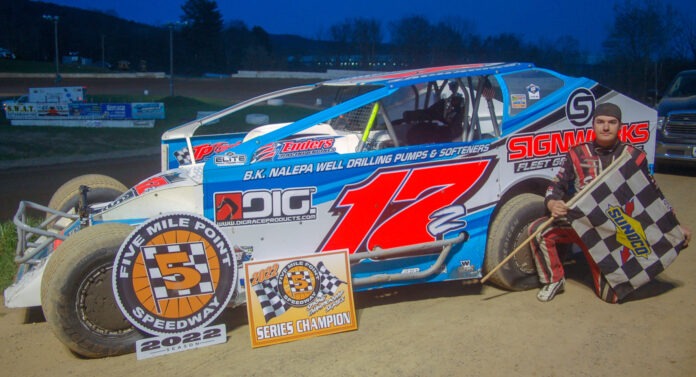 KIRKWOOD, NY – Gary Smith was the winner of the Spring Championship Series finale on Saturday at Five Mile Point Speedway.  The victory in the 25 lap Crate Sportsman event was worth $1,000 for Smith.  Seth Zacharias edged out Brian Malcolm by one point to win the Spring Series Championship for Sportsman.  Racing returns on Saturday, May 14th with the official 72nd Season Opener at Five Mile Point Speedway including the weekly Modifieds.

Gary Smith and Alex Konopka sat on the pole for the 25 lap Crate Sportsman feature by virtue of the re-draw.  At the drop of the green flag Smith immediately took command.  Smith jumped out to the race lead as Konopka settled in to second place.  Seth Zacharias and Dominic Roselli had a great battle for third and fourth place.  Zacharias ran the low side as Roselli used the high side around the quarter mile oval.  On lap 5 the caution flew when Roselli got too wide and clipped the homestretch wall entering turn 1.  After a quick trip to pit road to check out the damage he was able to return.

When racing resumed, Smith again held the point as Konopka and Zacharias ran in the second and third slots.  Opening day winner Brian Malcolm saw his spring title hopes derailed on lap 8 when contact from another car sent him spinning.  When the green flag flew Smith once again showed he was the guy to beat out front.  Zacharias now hounded Knopoka for the runner-up slot and was able to work past on lap 9.  Meanwhile Malcolm was trying to work his way back forward from the rear of the field as he battled power steering issues.

The balance of the race went caution free with Smith leading every lap on his way to the victory.  Zacharias finished second with Konopka taking the podium finish in third. Blaine Klinger charged to fourth at the finish and Malcolm rallied to fifth place.  For Zacharias, the runner-up finish was enough to solidify him as the 2022 Spring Series Champion in the class.

Jon Carpenter and Gene Sharpsteen set the pace for the 20 lap Street Stock feature.  The duo has certainly logged a lot of laps at the quarter mile oval in the past.  When the green flew Carpenter felt right at home as he took command of the race lead. Sharpsteen settled in to second during the early going.  Kurt Decker was on the move early from his fifth place starting spot as he made his way forward.  On lap 6 Decker moved in to third place and on lap 13 worked past Sharpsteen for second.  By this time, Carpenter had opened up a sizeable race lead and without the benefit of a caution Decker was left to settle for second.  Carpenter went on to lead every lap on his way to the victory.  Decker finished in second which was good enough to wrap up the Spring Series Championship.  Sharpsteen, Doug Polhamus and Tyler Beecher were the top five finishers.

The Futures Sportsman division was the third class of the evening racing card on Saturday at the speedway.  Twelve-year old Joshua Landers led all 20 laps enroute to his second feature win in three starts in the Spring Championship Series.  The victory also was enough for him to lock up the Spring Championship Title. Matt Millard made his debut for the 2022 racing season and looked impressive with his second-place finish.  Last weeks winner Joe Buchanan finished third with Travis Rooney and Phil Clapper rounding out the top five.

An afternoon program of racing took place on Saturday as well.  With the predicted cold nighttime temperatures track management split the programs into an earlier segment. Jared Green swept the three Spring Series races in the 600 Modified division and locked up the title as well. Sheldon Whitman won his first Factory Stock feature of the season and Carter Bixby took the overall Spring Championship title in the class.

COUNTER POINTS…The Spring Championship Series was originally scheduled for five races and with wet spring time conditions it was paired down to three races…A driver’s best two out of three finishes ultimately determined the outcome of the point series…The Spring Championship Series format has been a great addition for the race teams as it has allowed teams to try different combinations in preparation for the 2022 Regular Season…Like last year, the Spring Series Futures Sportsman class provided needed track time for brand new drivers looking to move in to the full fledged Sportsman class on May 14th…The 72nd Consecutive Season Opener is scheduled for Saturday, May 14th…This will mark of the regular season point races and the return of weekly Modified racing…A very competitive field of Modified drivers are gearing up for the 2022 racing campaign at the speedway…All of the divisions look to be ultra-competitive once again…