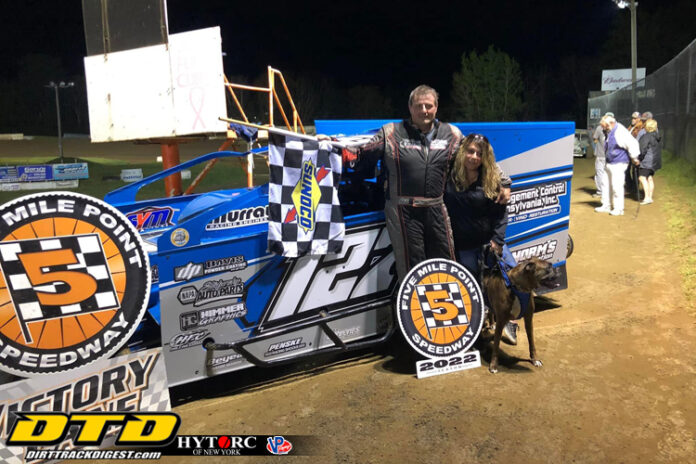 BINGHAMTON, NY – Frank Yankowski recorded the win in the 30 lap Modified feature at Five Mile Point Speedway on Saturday night. The popular victory was the first in the Modified ranks at Five Mile Point for Yankowski after 33 years of competition. Blaine Klinger was the Crate Sportsman feature winner with Jon Carpenter winning the Street Stock main for the second straight week.

Dan Vauter and Yankowski made up the front row for the start of the 30 lap Modified feature. Yankowski jumped out to the race lead at the drop of the green flag utilizing the fast outside line on the quarter mile. Vauter settled in to second place and remained close. Southern Tier Open winner Nick Rochinski ran in third as Defending Track Champion Brett Tonkin advanced to fourth during the early going. The top three put on a fantastic race as Yankowski remained committed to the high side of the speedway, Vauter ran low and Rochinski looked for racing room in the middle. Tonkin remained with the lead group, waiting for any error.

The race went caution free and by lap 15 the leaders were engaged in lapped traffic. The lapped cars held their lines but those lines were “three wide” with the leaders approaching. On lap 18 Rochinski made a daring move off of turn 4 as he tried to go three wide up the middle for the race lead as they approached the lapped cars. Unfortunately, he ran out of space and wound up spinning backwards on the homestretch. Fortunately, the field safely passed by with the help of an immediate yellow flag. Rochinski would restart from the rear of the field.

The first restart of the race was in single file fashion as it was past the halfway point. Yankowski maintained the race lead on the lap 18 restart but the caution would fly quickly. P.J. Goodwin got into Brian Malcolm causing a quick caution and the duo would restart at the back of the pack. All eyes were now on Rochinski as he was starting back from deep in the field and was fast during the first half of the race. When racing resumed Yankowski continued his fast pace out front. Vauter and Tonkin ran in second and third while Brad Szulewski worked up to fourth from ninth and J.R. Fulper was now in the fifth slot. On lap 21 Goodwin finished off Malcolm bringing out the caution flag and bringing an end to both of their nights. The final restart of the night saw Yankowski continue his great race as Tonkin began to apply the pressure to his team mate Vauter. Meanwhile, Rochinski was on a mission from going to the rear of the field earlier and had broken into the top ten.

The race would go caution free the balance of the way with Yankowski showing the way for his first victory. Vauter finished second with Tonkin coming across in third. Rochinski rallied all the way to fourth at the checkers with Szulewski finishing in the fifth slot. Fulper, Barry White, Joey Colsten, Glenn Knapp and Bobby Puckett completed the top ten slots.

Blaine Klinger led wire to wire in the 20 lap Crate Sportsman feature event on Saturday night. He and “back to back” Track Champion Gary Smith started on the front row at the start with Klinger taking the immediate advantage. Klinger was never seriously challenged as he had the Klinger Powersports 9k on rails. Smith ran in second throughout as Matt Brewer worked past Josh Landers during the early laps for third. The race went caution free and Klinger never looked back enroute to the victory. Following Klinger across the line was Smith, Brewer, Landers and Seth Zacharias.
Jon Carpenter won his second consecutive Street Stock feature event on Saturday night. Like the Sportsman the 20 lap feature went caution free. Tyler Yeagle led the first 11 laps of the feature event only to have mechanical issues send him pit side. The race remained under green flag conditions and Carpenter took over from there. He would go uncontested over the balance of the race. Carpenter took the checkers with Gene Sharpsteen, Steve Polhamus, Brett Spoor and Kevin Rice completing the top five.

Danelle Smith was the winner of the 20 lap Futures Sportsman feature event. That race only had one caution as it was a trend as caution free racing was a trend on Saturday. Apparent winner Matt Millard had the win taken from him after post-race technical inspection. Smith started fourth but dropped back to sixth after early contact with another car sent her up the track. Despite the single caution, Smith remained poised and worked back through the field to capture the runner-up slot while closing in on Mallard over the final stages. After Smith was declared the race winner podium finishes went to Joe Buchanan and Amanda Scholtisek.

COUNTER POINTS…Racing continues this Saturday, May 21st with a complete racing program…On Saturday heavy rain swept through the area for almost an hour but track crews did an outstanding job getting the track race ready…The program started a half hour late due to the rain and was completed by 9:45 p.m…The track surface was wide and multi-grooved as the overall lack of caution periods show…For Yankowski, his Modified victory was popular with fans and fellow-competitors…He had won another time in the early 2000’s only to be stripped of the victory due to be light at the scales…On Saturday he left no doubt that he is ready to contend for the 2022 Track Championship…Women in Racing – Danielle Smith’s victory in the Futures Sportsman class was popular but not uncommon for the women that race at Five Mile Point Speedway…Aleia Geisler is a two-time Modified feature winner at the speedway…Last year Bethany Gilbert was the Four Cylinder Novice Track Champion…On Saturday, Smith, Geisler, Amanda Scholtisek and Meckenzie Marsh all competed in the open wheel Sportsman or Modifieds…The Blaine Klinger victory in the Crate Sportsman class was another popular victory as the Klinger family has been long-time supporters of the speedway for three generations…Saturday served as the regular season point race opener at the speedway…It was the 72nd consecutive regular season opener…teams were informed that they will be able to drop a finish or an event that they cannot attend this year, taking into consideration the costs of fuel combined with limited tire and parts supplies…