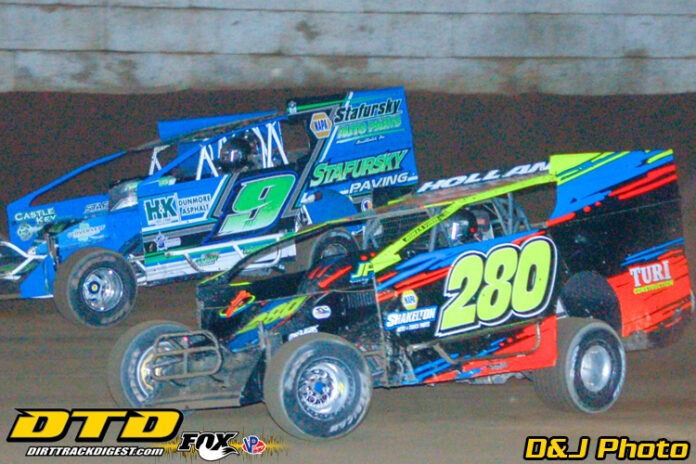 KIRKWOOD, NY – After a runner-up finish in his last outing, Justin Holland did one better on Saturday by recording the win in the 30 lap Modified feature at Five Mile Point Speedway. In the process he became the fourth different winner in as many races this season in the class.  Blaine Klinger raced to the victory in the Sportsman feature, his third consecutive.  Jared Green had a chance to collect his own bounty on Saturday in the 600 Modified feature but opted to let it roll over after winning his sixth straight feature event.  He remains undefeated in 2022.

Brian Malcolm and Brad Szulewski led the Modified field to the green flag for the 30 lap feature event. Szulewski immediately took advantage of the outside line to power into the race lead in turns 1 and 2 at the start. Malcolm settled into second place as Holland quickly applied the pressure on him.  Szulewski hoped that battle would for second would help his advantage out front but Holland moved past Malcolm on lap 5.  Just one lap later Holland worked past Szulewski for the race lead.  Szulewski remained within striking distance as the top two left the balance of the field.

A tremendous battle took place for spots three through seven as Malcolm, Dan Vauter, Brett Tonkin, Nick Rochinski and Frank Yankowski all swapped positions on the speedway.  Vauter had started eighth and was already up to fourth by lap 6 as the group used all of the lines around the speedway in this intense battle.  As the race approached the mid-way point Holland had opened his advantage over Szulewski as the two continued to leave the field behind them.  Lapped traffic began to come into play over the final ten circuits as Szulewski began to cut into Holland’s race lead slightly.

Holland made quick work of any lapped cars and would go the balance of the race otherwise unchallenged.  For Holland it was his first victory of 2022 and his eighth career Modified victory at the speedway.  Szulewski had his best run of the season with the second place finish.  The great battle for third ended with Malcolm grabbing the podium finish at the wire.  Vauter and Yankowski rounded out the top five.  Vauter added to his current point lead with the fourth place finish. The feature went caution free.  The race prior saw only one caution on lap 1 which translates to the last 59 laps of feature action all caution free in the Modified division.

Blaine Klinger has been on a mission in the Crate Sportsman division the past three race nights at Five Mile Point Speedway. Klinger has now won three consecutive feature events after his most recent victory on Saturday.  By virtue of the re-draw Marty Goodwin and Klinger led the field to the green in the 20 lap feature event.  At the drop of the green Klinger wasted no time in taking the race lead from the outside line.  Like the week prior, the feature would go caution free and Klinger led wire to wire as he was virtually unchallenged throughout.  With the win, a bounty will be put in place on Klinger for this Saturday’s feature event. Goodwin finished second with Seth Zacharias, Gary Smith and Adam Gilbert rounding out the top five positions.

Jared Green has been unstoppable in the 600 Modified division in 2022.  Entering Saturday, he had won all five feature races for the class. In his last outing the victory came in a borrowed ride. On Saturday a $150 bounty was in place for anyone that could end his win streak.  Josh Towner and Green sat on the front row for the 20 lap feature event. When the green flag flew Green did not waste any time in taking the race lead.  Green would lead wire to wire for the sixth straight victory.  In victory lane he had the option of taking the $150 or letting it double for this Saturday.  The team flipped a coin to decide and the bounty will now grow to $300 for this Saturday night.  Dillon Robinson had a great run for second place at the finish.  Dustin Jones had an impressive drive for third with David Brown and Andy Bolles completing the top five.

The “repeat winners” theme continued in the 20 lap Street Stock feature as Shane Wolf, Jr. also took advantage of the outside front row starting spot to lead every lap of the main event. Two-time winner Jon Carpenter made a late race challenge after rallying from sixth place.  Although Carpenter was able to close the distance late in the race he never seriously challenged Wolf for the lead.  Wolf will look for the “three-peat” this Saturday when racing continues. Following Wolf and Carpenter across the line was pole setter Kurt Decker.  Tyler Yeagle and Gene Sharpsteen completed the top five positions.

Danelle Smith made it three in a row in the Futures Sportsman division.  Smith took the lead from Joe Buchanan on lap 3 and never looked back.  She would lead the balance of the 20 lap feature event.  Scott Zinacker closed in during the late stages but was unable to mount a serious bid for the race lead.  At the finish it was Smith, Zinacker, Joe Gorsline, Buck Brown and Buchanan.

Tommy Groover hopped aboard the Sheldon Whitman Factory Stock and raced to the win in the 20 lap feature event.  Charlie Towner and Kurtis Stickle started on the front row with Stickle taking command at the start.  Stickle led the majority of the race with Groover close in tow. On the final lap Stickle drifted in turn 1 and Groover pounced.  Groover took the lead off of turn 2 and went on for win number one on the season.  Stickle finished second with Kevin McDonald, Charlie Towner and Rich Sharpsteen completing the top five.

Dave Simms won his second consecutive Four Cylinder Expert feature event.  Simms had a great battle in the early going with Kevin Whitman.  Simms got the better of their battle as he raced to win number two in the 15 lap main.  Whitman finished second with Jeff Hayes having his best run of the season for third. Scott Beach and Kenny Underwood completed the top five.

The 12 lap Four Cylinder Novice feature saw a spirited battle eventual race winner Sean Lynch and runner-up Cody Ames.  Ames led the first four circuits with Lynch taking over on lap 5. The duo ran side by side over the final seven laps with Lynch holding on for the win.  Ames finished second with Todd Maynard, Dillon Makey and Ethen Maynard completing the top five.

COUNTER POINTS…Once again a great night of racing took place in every division as a total of only five caution flags flew during all of the feature action in the eight classes…Corey Oltz hauled up from Louisiana to make his first ever start in the Modified division at Five Mile Point Speedway…Oltz completed every lap and wound up finishing in 11th…Both his dad “Robin” and grandfather Jerry had competed in the Modified division at the speedway in the past…On Monday morning the quarter mile oval was having new clay put in place for the balance of the 2022 racing season.