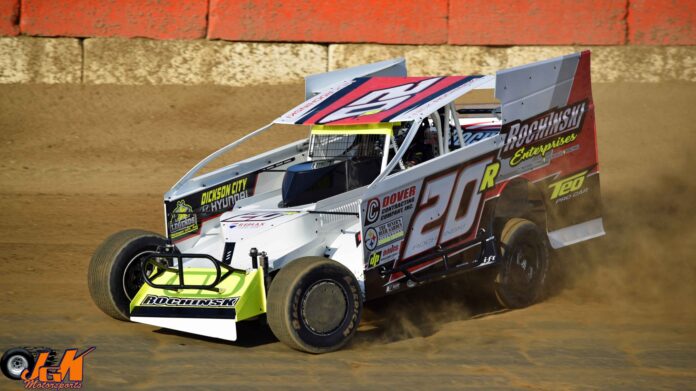 KIRKWOOD, NY – Nick Rochinski raced to the victory in the 30 lap Modified feature on Saturday night at Five Mile Point Speedway.  The win made Rochinski the first repeat winner in the division this season.  Jared Green continued his undefeated streak in the 600 Modified division and in the process claimed his own bounty making the victory with $550 on Saturday. The racing was outstanding in all of the classes on a brand new surface that was put in place early in the week.

In Modified feature competition Joey Colsten and Brian Malcolm led the field to the green flag in the 30 lap feature event.  Malcolm immediately jumped into the race lead at the start but by the time one lap was logged Nick Rochinski had vaulted from fourth to the race lead.  Malcolm ran in second place as Defending Track Champion Brett Tonkin began to challenge.  Tonkin took over second place on lap 3 and one lap later Malcolm retired when he lost brakes in the 119.  Frank Yankowski was now up to third place after starting in the sixth slot as the race remained under green. Rochinski opened up his lead over Tonkin as Yankowski and Brad Szulewski battled for third and fourth.

The first caution of the feature event flew on lap 10 when Greg Morgan slowed coming off turn 4.  Rochinski opted for the inside line on the restart with Tonkin alongside.  Rochinski maintained the lead on the restart with Tonkin settling into second. Current point lead Dan Vauter had now broken into to the top after starting deep in the field. Out front, Rochinski utilized the outside of the quarter mile as he began to re-establish his prior race lead over Tonkin.

By lap 23 Rochinski was now in heavy lapped traffic and Tonkin closed the margin to less than two car lengths. Tonkin had his best opportunity over the next few laps as he and Rochinski navigated the lapped cars. On lap 28 Glenn Knapp slowed bringing out the caution flag.  This worked to Rochinski’s advantage as now he had clean track ahead of him for the final two circuits.  At the finish it would be win number two of 2022 for Rochinski, Tonkin had his best finish of the season in second. Vauter charged up to third with Yankowski and Szulewski completing the top five. Dan Creeden, Justin Holland, Joey Colsten, Barry White and Bobby Puckett completed the top ten. Heat winners were Rochinski and Malcolm.

Gary Smith ended the three-race win streak of Blaine Klinger in the 20 lap Crate Sportsman feature event. Smith took the lead on lap 3 from Adam Gilbert and went on uncontested.  Klinger took over the second spot on lap 6 from Gilbert but Smith had already opened a big advantage in a race that would go caution free from lap 2 onward. With the victory Smith also collected the $150 bounty that was posted on Klinger.  At the finish it was Smith, Klinger, Gilbert, Marty Goodwin and Matt Brewer.

Another bounty was posted on Saturday, this time it was in the 600 Modified division.  Jared Green entered the evening undefeated in weekly competition and the bounty was $300 that was posted.  Green opted to let the bounty roll-over the week prior.  This Saturday, Green took the race lead on lap 3 from Dustin Jones and led the balance of the 20 lap feature event. Jones remained close throughout the race but was never able to mount a serious threat to recapture the race lead.  Green took the win with Jones, Kenny Harris, David Brown and Andy Bolles completing the top five.

The 20 lap Street Stock feature event was outstanding on Saturday as the 20 lap feature went caution free.  Defending Track Champion Doug Polhamus started on the front row with Tyler Yeagle.  At the start Yeagle used the outside to his advantage as he took the race lead. Polhamus remained in striking distance as Shane Wolf, Jr. and Jon Carpenter, both with two wins on the season ran nearby in third and fourth. On lap 5 Polhamus regained the race lead as the battle with Yeagle intensified. Yeagle went back to the high side which allowed Wolf to take the second slot on lap 8.  On lap 10 Yeagle used the cushion to perfection as he worked back into second place.  Yeagle now refocused on Polhamus, the race leader as they continued their earlier battle. On lap 19 Yeagle worked back past Polhamus for the race lead and went on to win by a car length. Polhamus finished second with Wolf, Carpenter and Kurt Decker completing the top five.

Danelle Smith won her fourth Futures Sportsman feature in a row on Saturday and claimed her own bounty. Smith took the lead from Joe Buchanan on lap 4 and led the balance of the 20 lap feature race.  With the win Smith pocketed an extra $100. Buchanan finished second with Jose Fedo having his best run in third.  For back-to-back Factory Stock Champion Justin Slezak made his open wheel debut and finished fourth. Mike Zuk finished fifth.

Charlie Towner and Kurtis Stickle sat on the front row for the 20 lap Factory Stock main event.  Towner took the lead at the drop of the green as Tommy Groover quickly hustled into the second slot.  The front duo had a spirited battle as Stickle remained within striking distance. The top three remained unchanged until lap 14 when Groover began to slow while running in second. The race remained green as Groover continued on but his pace slowed. This allowed Towner to pull ahead and collect the win in a caution free main event. Stickle finished second with Groover rallying back late to capture fourth.  Jason Beebe finished fifth.

Tim Vandemark ended the two-race win streak of Dave Simms on Saturday in the Four Cylinder Expert division. Vandemark took the lead from Brian Salmini on lap 9 and led the balance of the 15 lap feature.  Salmini had led the first 9 laps and eventually pitted with a flat on lap 10.  Vandemark collected the win with Jeff Hayes, Josh Wilder and Mike Jenks following. Salmini rallied back late for a fifth place finish.  For Hayes, Wilder and Jenks their finishes were their best of the season.

COUNTER POINTS…Once again racing was completed prior to 10 p.m. which has been the norm this season…Thirty-five tri-axle loads of clay were put down on Monday and the quarter mile held up well with over 155 feature laps taking place…The new clay had great bite with minimal dust in any of the features…With lower than anticipated car counts the Crate Sportsman, Street Stock, Factory Stock and 600 Modified division will return to a non-handicapped format…This means those classes will again be a “draw-re/draw format” for the balance of the regular season…The Modifieds, Futures, Experts and Novice will remain handicapped classes for the regular season…Racing continues this Saturday with a full weekly program…On Tuesday, June 21st the speedway will host the Mike Colsten Remembered 51 lap special for Modifieds paying a minimum of $3,000 to win…Danelle Smith (Futures Sportsman) and Gary Smith (Crate Sportsman) were a daughter and father feature winning combination on Saturday…