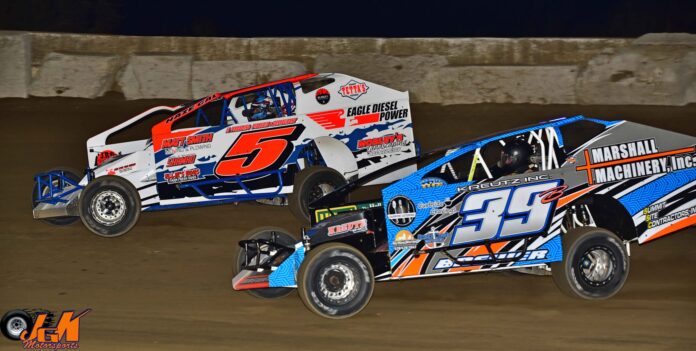 KIRKWOOD, NY…The Modifieds were on off on Saturday, June 25th which put the other weekly classes in the limelight on this night.  Doug Stack, Sr. returned to the speedway on Saturday to claim his first Street Stock victory in two years.  Gary Smith returned to victory lane in the Crate Sportsman division.

Gene Sharpsteen and Doug Stack sat on the front row for the 20 lap Street Stock feature event on Saturday night.  At the drop of the green the battle for the lead immediately took shape as the leaders went three wide.  Stack dove to the inside of Sharpsteen as Doug Polhamus charged to the outside from row two.  The wide and smooth racing surface was ideal for the Street Stock teams as they ran in triplets and tandems throughout the pack.  Stack emerged the race leader on lap 1 with Sharpsteen close in second.  Polhamus continued to run the cushion as he and Sharpsteen locked in to a great battle for second during the early going.  Jon Carpenter quickly looked to join that battle as he began to test the inside of the duo.

On lap 6 the caution flew with Stack leading.  Polhamus was now second with Carpenter, Tyler Yeagle and Sharpsteen making up the top five. On lap 7 Carpenter made his way into second place and began to try all routes around Stack for the race lead.  The two hooked up in a great battle for the lead as Polhamus and Yeagle battled for second place.  Carpenter literally used every line he could to take the race lead but Stack was up to the challenge as he held his line.  On lap 19 Carpenter looked to make one final bid when he suddenly slowed on the backstretch.  This allowed Stack to go on unchallenged on the final lap and record the win.  Yeagle made a last lap pass for second with Polhamus, Sharpsteen and Brett Spoor completing the top five.  Carpenter had to settle for eighth place.

Gary Smith and Seth Zacharias set the pace for the 20 lap Crate Sportsman feature event on Saturday. Smith raced out to the lead at the start as Zacharias settled into second place during the early laps.  Blaine Klinger, who graduated from Walton High School earlier in the day wasted no time in working on Zacharias for second.  On lap 3 Klinger took over the runner-up slot as Smith set a torrid pace out front. Zacharias came right back at Klinger as the second place battle continued. This allowed Smith to open up his lead over the field.  The caution flew on lap 12.  On the restart Smith continued to show the way with Klinger trying to keep pace.  Zacharias remained in third as Tommy Groover and Adam Gilbert broke into the top five.

A caution on lap 18 reset the field for the final time.  Smith again was flawless on the restart and again showed the way.  At the finish it was Smith, Klinger, Zacharias, Gilbert and Groover making up the top five.

Kurtis Stickle raced to his second Factory Stock feature win of the season in their 20 lap main event.  The race went caution free and Stickle took the race lead on lap 11 when Charlie Towner, the race leader dropped out.

Mike Robinson raced to his first win in the 600 Modified division on Saturday.  He became the first driver other than Jared Green to pull into victory lane in the division this season.  Green looked to be on his way to another win when on lap 10 his motor expired and went up in flames.  Robinson took over the point at this stage and held off a determined Dustin Jones for the win.

Collin Mills won his first ever Four Cylinder Expert Feature event on Saturday.  He took the lead on the final lap when race leaders Josh Wilder and Kenny Underwood crashed in front of the flaggers stand at the finish.  Mills missed the incident and scored the win.

Danelle Smith was the Futures Sportsman winner for the fifth straight race.  Scott Zehnacker stayed close but Smith had enough to keep her win streak alive in that 20 lap main event.

Sean Lynch was the winner in the Four Cylinder Novice class.