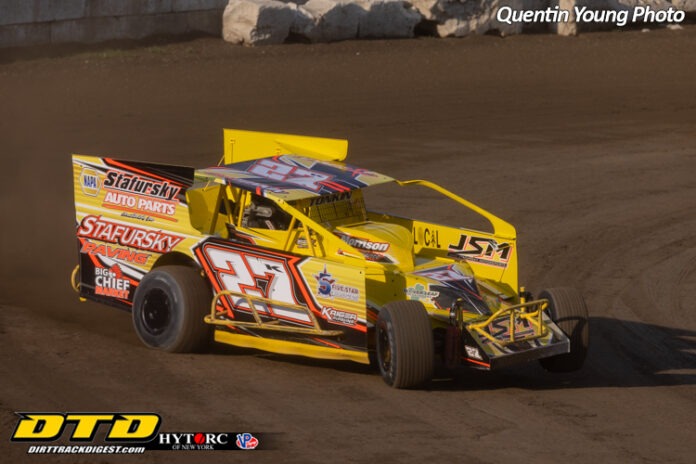 KIRKWOOD, NY – Defending Modified Track Champion Brett Tonkin recorded his first feature win of the season on Saturday at Five Mile Point Speedway. Gary Smith was a repeat winner in the Sportsman and Tyler Yeagle collected win number two on the season in the Street Stocks. Racing continues this Saturday, July 16th with a full racing program on the card.

Joey Colsten and Brian Malcolm led the Modified field to the green in the 30 lap feature event. Malcolm immediately charged into the race lead utilizing the outside line. Third place starter Brett Tonkin worked up to the second position on lap 2 as the Malcolm was looking to run away from the field. The caution flew for the first time on lap 13 as Brian Puckett slowed on the backstretch and Frank Yankowski got tangled up with him. Puckett was done for the evening and Yankowski re-started at the back of the field.

When racing resumed Malcolm continued to set a fast pace out front as Tonkin was able to remain close but not enough to challenge. Colsten continued to run in the third slot as Justin Holland was up to fourth from the eighth starting slot by the 20 lap point of the race. Malcolm looked to be on his way to his first feature win of the season at the quarter mile when on lap 25 his motor when up in a plume of smoke bringing out an immediate yellow flag. For Malcolm, it was an example of his 2022 racing season as he has terrible fortune and has had several motor failures.
Once the smoke cleared racing went back to green with Tonkin now the man out front. Holland was now in second and looking for any opportunity to return to victory lane. Tonkin was flawless over the final five laps and took his first checkers of the season. Holland settled for second with Colsten having his best run of the year in third. Dan Vauter drove from tenth to fourth at the stripe. Nick Rochinski finished fifth. Vauter and Rochinski entered the evening tied for the Modified point lead.

The “fun story” of the evening was in the 600 Modified division on Saturday. Jared Green has lost only one race all season long and that was due to a motor expiring while leading back on June 25th. The division is now running a draw – re/draw format for weekly starting position. As the feature came on the speedway the fans groaned as Green had redrawn the number 1 starting position. Green was given a challenge over the “one-way” radio with race control. He was offered a bonus of $100 if volunteered to start last and still won. Without hesitation Green took the challenge and pulled to the rear of the field. Since this was only discussed over the “one-way” radio, not even his pit crew knew why he was pulling to the rear of the field. The crowd was thrilled when he took the challenge and all eyes were on him when the green flag flew. Dustin Jones looked like the driver that could keep Green from cashing in on the bonus. Jones led the first 10 laps of the race. On lap 11 Green took over the race lead but Jones remained within contention over the final 9 laps. Dustin Zimmer was impressive as he began to close in on the leaders late in the race. For Zimmer it was only his second start of the season. At the finish Green would collect the win and $100 bonus. He also gained more fans in the stands by taking the challenge. Jones ran a great race for second with Zimmer third. Kaleb Lacey and third-generational FMP driver Steven Cole completed the top five.

Gary Smith became a back to – back winner with the victory in the 20 lap Crate Sportsman victory. By the luck of the redraw Smith started on the pole and led all twenty laps. Even though Smith led the duration it was not an easy victory. Seth Zacharias debuted a brand new car on Saturday and charged from third to second immediately. Smith was fast on the high side of the speedway and Zacharias was applying a huge amount of pressure along the bottom of the speedway as the duo had a great early battle. On lap 10 the caution flew as Zacharias slowed with mechanical issues and headed to the pits. This put Marty Goodwin up to the second slot with Smith out front. Goodwin had a great run going after starting in eighth place. At the green Goodwin stayed close but as the laps wound down Smith opened up his margin. Smith went on for the victory with Goodwin second. Steve Babicek made a rare start and had a great drive for third. Blaine Klinger rallied from eleventh to finish fourth. He entered the evening as the point leader. Adam Gilbert finished in fifth after re-starting in tenth earlier in the race.

Tyler Yeagle won his second Street Stock feature of the season. Jon Carpenter and Doug Polhamus started on the pole for the 20 lap main event. Carpenter has been fast all season long and Polhamus, the multi-time Track Champion has struggled in 2022. At the start Polhamus took the lead. He led two circuits before Yeagle took over the point. The two had a great battle early but once Yeagle got out front he was able to pull away. Yeagle scored the victory with Polhamus finishing in second. Carpenter finished third with Doug Stack Sr. and Gene Sharpsteen completing the top five.
Factory Stock action saw Kurtis Stickle win his second consecutive feature event. He had a great race with Jason Beebe throughout the 20 lapper. Charlie Towner led the first 15 laps only to pull pit side with mechanical woes for the second straight race event. The final 5 laps saw Stickle and Beebe put on a great race. Stickle took the win with Beebe settling for second. Todd Sutliff had another good run with third place. Billy Shoemaker and Blake Furman completed the top five.

Danelle Smith collected another victory in the 20 lap Futures Sportsman feature event. Smith has been on rails all season long. On Saturday it looked like Joe Buchanan may end her winning streak as he led the first half of the event. It only took one slight bobble and Smith took over the race lead. Once out front, she was able to keep distance to prevent Buchanan from making a bid for the lead. Buchanan settled for second with Josh Fedo have another solid run in third. Derrick Schaffer and Eric Reese completed the top five.

Brian Salmini put it all together on Saturday night in winning his first ever FWD Four Cylinder Expert feature at Five Mile Point Speedway. Salmini had been in contention for a win many times only to have mechanical woes or bad luck keep him out of the winners circle. On Saturday he held off the divisions best by leading all 15 laps and collecting the win. Josh Wilder retuned with a new car to take the second spot. Tim Vandemark finished third with Rich Wagner and Jeff Hayes completing the top five.

Ethen Maynard made a last lap fourth turn pass to take the win in the 12 lap Novice feature.