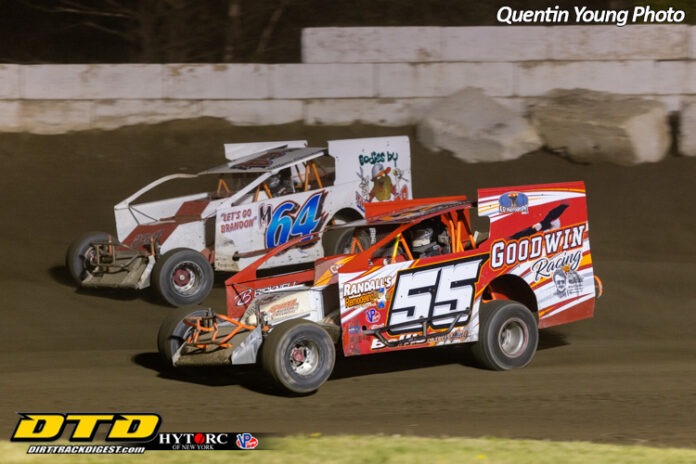 KIRKWOOD, NY – P.J. Goodwin raced to the Modified win at Five Mile Point Speedway on Saturday.  It was Goodwin’s first win at the quarter mile oval since 2017 and the fifth of his career at the speedway.

Goodwin and Glenn Knapp led the Modified field to the green for the 30 lap feature event.  The names Goodwin and Knapp have been a part of the landscape at Five Mile Point Speedway for decades.  At the start Goodwin won the drag race into turn 1 over Knapp. One lap into the feature the caution flew for the first time.  Joe Eisenhauer slowed on the speedway initiating the first yellow period. On the restart again, Goodwin raced out to the lead but the green flag racing was once again short lived.  On lap 3 a three wide battle ran out of real estate as Frank Yankowski and Brett Tonkin got together.  Both slowed with flat tires and headed to the pits.  At the same time Kenny Hildebrant retired to the infield area.

The third time was the charm as the lap 3 restart would be the last of the 30 lap feature.  Like the two prior, Goodwin beat Knapp to the first and second turns for the race lead. Aleia Geisler motored into second place as Knapp settled into third. In the back last weeks winner Tonkin and opening day winner Yankowski tried to work their way through the field.  Goodwin opened up his lead over Geisler as the race approached the 1/3 benchmark. Ninth place starter Justin Holland was now up to the third slot with Nick Rochinski and Knapp making up the top five.  As the race hit the halfway mark point leader Dan Vauter had worked his way past into the fifth slot.

The race remained caution free and as the leaders hit lap 20 Geisler appeared to be closing in on Goodwin for the race lead.  As quickly as she began to close the margin Holland began to apply the pressure on her for second.  The battle between Geisler and Holland again allowed Goodwin to open his race lead margin. On lap 28 Holland made his way past Geisler for the second slot and set his sites on Goodwin.  Over the final lap and a half Holland made strides but was never able to challenge Goodwin for the win.  Goodwin led all 30 laps for his first win since 2017. Holland was second with Geisler coming across in third.  Rochinski and Vauter completed the top five.  Positions six through ten were filled by Knapp, Barry White, Tonkin, Brian Malcolm and Brad Szulewski.

Back – to back Crate Sportsman Track Champion Gary Smith recorded the victory in the 20 lap feature event on Saturday for the third straight time.  By virtue of the re-draw Smith started on the pole in the feature event and led every lap.  Brad Weaver remained close throughout but could never mount a serious challenge for the lead.  Smith was followed across the line by Weaver, Seth Zacharias, Blaine Klinger and Marty Goodwin.

COUNTER POINTS…The Modified victory for Goodwin was an emotional one…The Goodwin family has competed at the speedway for decades…The Goodwin family was also close with Mike Colsten for years…Goodwin’s #55 has an image of Mike Colsten on the rear quarter panel of the car…After the win, Goodwin got out of his car and saluted the Mike Colsten billboard in turn 3 on the speedway…The win also came while using one of Mike’s former Modified steering wheels…The lack of cautions in the Modified feature made passing an earned victory as there were three wide battles all over the speedway…Justin Holland advanced from ninth to second despite the lack of yellows to regroup the field…Aleia Geisler had her best run of the season after finding some drive line issues since the last race…Brian Malcolm jumped aboard the Art Bray Modified on Saturday after blowing his third motor of the season in his own car the week prior…This Saturday is the long awaited “Pack the Track” Night at the speedway…All grandstand tickets will be only $5…