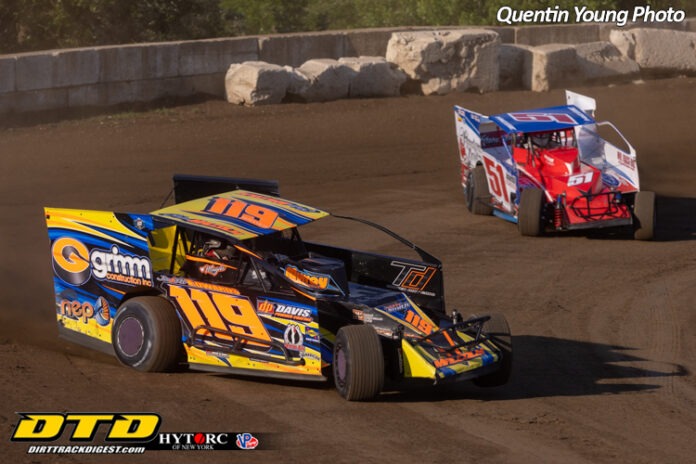 KIRKWOOD, NY…Brian Malcolm backed up his victory in the 58th Heath Memorial last time out by winning the 30 lap Modified feature this past Saturday at Five Mile Point Speedway.  Malcolm, who struggled throughout 2022 has rebounded nicely in the past two outings.  Dave Simms swept the double FWD Four Cylinder Expert features on Saturday, including the held-over Heath Memorial race for the class.

Malcolm and Barry White sat on the front row for the 30 lap Modified main event on Saturday.  The race was slowed by only one caution and it immediately came on lap 1.  The caution flew when Frank Yankowski got underneath Brad Szulewski in turn 2 and the two became hooked.  The tandem had started in row two and the unfortunate incident saw Szulewski headed to the pits and Yankowski forced to restart at the rear of the field. Nick Rochinski was also involved in the incident so for the second straight race he was in the pits without a lap being logged.  Unlike the prior race, Rochinski was able to restart at the rear of the field and put on a show moving forward throughout the race.

When racing resumed Malcolm was on rails as jumped out to the race lead over White.  On the restart White started on the outside of the front row but essentially let Malcolm go and dove to the bottom to grab the low line.  Dan Vauter moved into the third position from his sixth starting spot as the top three checked out away from the field and each other.  Point leader and defending track champion Brett Tonkin was on the move from his ninth starting slot as Rochinski was slicing through the field from restarting from sixteenth.

The racing went non-stop for twenty nine laps and during the first half of the race Malcolm had opened up a sizeable lead but that lead diminished greatly over the final ten laps as lapped traffic became a factor.  Malcolm was patient with the lapped cars late in the race and this allowed White to close the gap considerably in the late stages.  Although he closed the gap White was never able to seriously challenge for the race lead.  At the checkers Malcolm was the winner for the second straight race. White finished second with Vauter third. Tonkin charged to fourth at the finish with Joey Colsten winding up fifth. Rochinski hustled back to sixth with Justin Holland, Bobby Puckett, P.J. Goodwin and Tyler Siri completing the top ten.  Heat winners were Malcolm, Szulewski and Vauter. The point championship battle has tightened even more with only two point races remaining.

Gary Smith won for the seventh consecutive Saturday night in the 20 lap Crate Sportsman feature event on Saturday.  This week it didn’t come easy as the race was hotly contested during the first half of the event.  Adam Gilbert and Doug Polhamus started on the front row for the 20 lap feature event.  Polhamus raced out to the lead at the drop of the green from the outside line.  The caution flew instantly on lap 1 and on this restart Gilbert now used the outside line to his advantage to take command of the race lead.  Smith started in fourth virtue to the re-draw and he quickly slipped into second place behind Gilbert.  Gilbert continued to lead as Smith remained close but not making any serious bids during the early going.  At the halfway mark Smith made his move as he dove to the inside of Gilbert and took command.  From that point on Smith would go on cruise control to keep his streak alive. Gilbert finished second with Brad Weaver closing late but settling for third. Marty Goodwin raced from eighth to fourth and Seth Zacharias completed the top five.

Jon Carpenter took the lead from Gene Sharpsteen on lap 1 of the Street Stock main event and led the entire 20 lap duration for the victory.  Doug Polhamus chased Carpenter down for the majority of the race but was never able to make a serious challenge for the race lead.  Two late race cautions were the only caution flag period with all but one of the original starters finishing. Following Carpenter across the line was Polhamus, Sharpsteen, Tyler Yeagle and Abe Romanik.

Kyle Smith raced to his first Futures Sportsman feature win.  Josh Fedo led the first eight circuits of the 20 lapper but spun in turn two while leading the way.  Smith took over the race lead and held off multi-time winner Danielle Smith over the final twelve laps. Kyle Smith and Danielle Smith were followed across the line by Fedo who rallied back.  Kortney Slavick and Joe Buchanan completed the top five finishers.

Dustin Jones fresh off his win in the Heath Memorial two weeks ago looked to make it two wins in a row in the 600 Modified feature division on Saturday.  Jones led the first six laps but got loose exiting turn 4 on the sixth lap and Jared Green wasted no time to take advantage.  Green went on to lead the balance of the 20 lap feature and collect the win.  Jones finished second with Caleb Lacey, Matt Cole and Ben Shaw completing the top five.  The race went caution free.

The 20 lap Factory Stock feature also went caution free on Saturday with Charlie Towner emerging the winner.  Towner started second and took the lead from Kurtis Stickle on lap 1.  Towner held off Tommy Groover throughout for the victory.  At the finish it was Towner, Groover, Stickle, Todd Sutliff and Billy Shoemaker completing the top five.

COUNTER POINTS…Another great night of racing took place on Saturday as the point battles tightened with only two races remaining…Brett Tonkin remains the Modified point leader with just a four point margin over Dan Vauter…Nick Rochinski remains within striking distance in third…The Colesville R.C. Club held a two-lap “Mud Boss” race in Memory of Duane Batzel…The race took place on the quarter mile oval with thirty-two starters taking to the speedway…James Ferguson, Jr. was the winner of the fun event…After finishing fifth in the Street Stock feature, Abe Romanik was involved in a serious traffic accident on his way home from the speedway…Romanik’s enclosed trailer was struck by a car entering the highway sending his truck and trailer into a flip…Fortunately there were only minor injuries…Reports had his truck and hauler as a total loss in the accident…The driver that hit them faces multiple ticket charges…