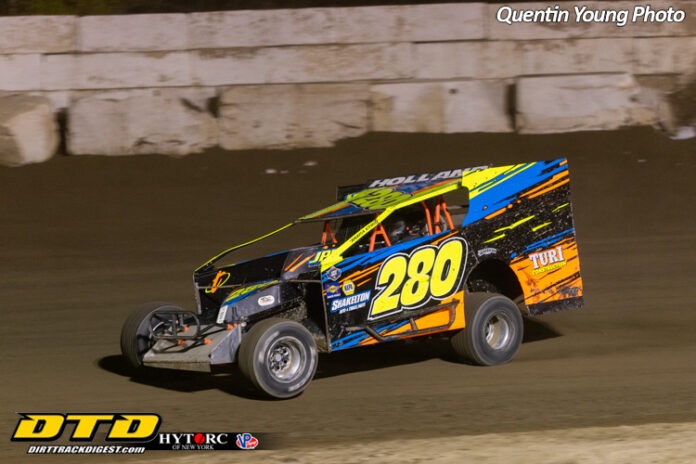 KIRKWOOD, NY-After 72 consecutive years of racing it is expected that this will be the final Season Championship event contested at the speedway.  This Saturday all of the 2022 Track Championships will be decided in all of the classes.  Most notably, the Modified division will be a 30 lap feature event paying $2,000 to win.  It is currently one of the closest point battles ever at the speedway as four drivers are separated by only 6 points entering this Saturday night.  Racing begins at 6:05 p.m. and as always kids 8 years old and younger are free in the grandstand when accompanied by an adult.

The drivers worked all off-season to prepare for the opportunity of being the 72nd Track Champion in their division this season at Five Mile Point Speedway.  After a season long battle the titles all come down to one night, this Saturday.

Gary Smith has now won eight Crate Sportsman feature events in a row.  Despite this, he has yet to lock up the 2022 Track Championship.  Blaine Klinger had his own three race win streak earlier in the season and he has kept pace throughout the season.  A bounty has been placed on Smith for this Saturday.  If he is beaten, (cleanly) and still finishes the race, the winner would earn a $1,000.  If Smith wins again, he will collect his own $1,000 bounty.  Adam Gilbert, Marty Goodwin and Seth Zacharias make up the top five in the point standings entering this Saturday.

Jon Carpenter is on his own winning streak in the Street Stock division.  He has won four feature events in a row entering this Saturday night.  If Carpenter finishes 14th place or better on Saturday he will lock up the 2022 Track Championship.  Tyler Yeagle and Doug Polhamus are in the hunt still but will need some help. Gene Sharpsteen and Abe Romanik are in the top five.

Jared Green has won almost every race he entered this season at Five Mile Point Speedway in the 600 Modified division.  Dustin Jones was always close behind in those finishes.  Jones has managed to stay in the hunt entering Saturday night as he trails Green by only 30 points. Green would have to finish seventh or better to win the Track Championship.

Another hotly contested Track Championship is in the Factory Stock division.  Kurtis Stickle leads Charlie Towner by only 22 points entering this Saturday.  If Stickle, finishes in the top five positions on Saturday he will lock up the title.  If he finishes outside of the top five spots things will get very interesting.  Stickle and Towner have had intense battles for the win all season long. Todd Sutliff has had a breakthrough season and currently sits in third. He is mathematically alive.  Billy Shoemaker and Jason Beebe are also in the top five in the standings.

Dave Simms has to finish fourteenth or better to win the 2022 Track Championship in the FWD Four Cylinder Expert division.  Simms has a 46 point lead over two drivers that are currently tied for second: Scott Beach and Mike Jenks. Brian Salmini and Jeff Hayes make up the top five entering Saturday.

In the Futures Sportsman division if Danielle Smith starts the 20 lap feature event she will lock up the 2022 Track Championship.  Joe Buchanan, last weeks winner in the class is currently second in the standings with Josh Fedo, Buck Brown and Derrick Shaffer in the top five of the standings.

Racing this Saturday will be intense as it all comes down to this one final event.  Pit gates will open at 3 p.m. with grandstand gates opening at 4 p.m. Practice will begin at 5:15 p.m. with racing slated to begin at 6:05 p.m.

For several months rumors have been circulating regarding the future of Five Mile Point Speedway.  The speedway ownership has a signed contract with a developer for the sale of the property.  The closing on the sale of the property is expected sometime in November this fall. The 72nd season of racing will likely be the final year at the historic quarter mile oval. Racing will continue in mid-September as the final Fall Series will take place.  The series will consist of five events.

For additional information please log on to www.5milepointspeedway.com.  The full order of events, pricing and all details can be found there. You may also phone us at 607-775-5555 for additional details on this weekend and the full 2022 racing season.