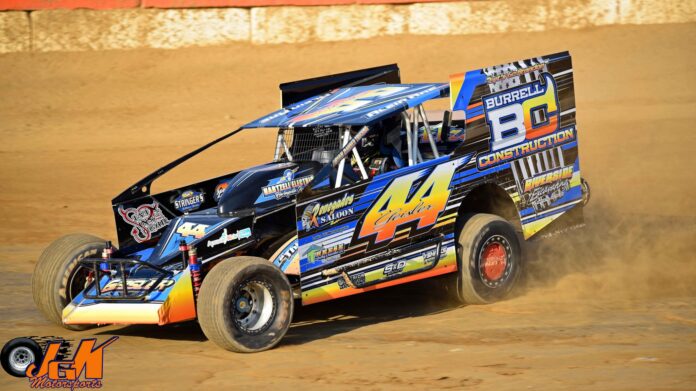 KIRKWOOD, NY – Five Mile Point Speedway hosted the 72nd Season Championship Night on Saturday at the historic quarter mile oval. Entering the evening all eight Track Championships were up for grabs. Entering the evening the Modified point championship was one of the closest ever as Justin Holland, Brett Tonkin, Dan Vauter and Nick Rochinski were only separated by six points. Brett Tonkin’s runner-up finish in the 30 lap Modified feature event was enough for him to lock up his second consecutive Modified Track Championship at the speedway. Aleia Geisler pocketed $2,300 for the victory in the Modified feature event, a race which was dedicated to her dad Ray who passed away unexpectedly during the off-season.

The 30 lap Modified feature event saw Glenn Knapp and Aleia Geisler on the front row. At the drop of the green Geisler powered past Knapp into the race lead. The caution flew on lap 2 for a car that slowed at the pit entrance. On the restart Geisler chose the inside line despite taking the race lead form the outside lane. Her choice was correct as she quickly pulled away on the restart. The top four title contenders were all in a battle within the top ten spots as Geisler set the pace. Knapp ran second with Holland on his heels in third. Rochinski was applying the heat to Holland for the third position as their title battle took shape. On lap 8 the caution flew when J.R. Fulper slowed on the backstretch and wound up backwards. At this point the top five consisted of Geisler, Knapp, Rochinski, Holland and Tonkin. Dan Vauter was in sixth place at this juncture, and he entered the evening only four points out of first in the standings. All four of the potential champions were running together to the delight of the fans. On the restart Tonkin pounced as he advanced from fifth to third. Ultimately, this was the move that would lock up his championship. One lap later Tonkin worked past Knapp for second as Holland, Rochinski and Vauter now made up the top five.

The caution flew on lap 12 when John Lutes made contact with Bobby Puckett as they ran battled for position. Puckett was forced pit side but did return prior to the restart. On the restart Tonkin made a solid bid for the race lead but Geisler was up to the task as she again pulled away as the race leader. The balance of the race would go caution free as Tonkin stayed close to Geisler but could not challenge. As the laps wound down Holland began to close back in on Tonkin for position number two. Whoever finished better of this duo would lock up the track title. Rochinski remained close in tow as did Vauter as again any mistake among those four would decide the title. Geisler opened her margin over Tonkin during the final laps as Holland began to really apply the pressure. On the final lap Holland dove under Tonkin in turn two as the two made contact and carried the battle down the backstretch. Geisler crossed the line for the win with Tonkin fending off Holland for second place and the track title. Holland finished third with Rochinski and Vauter completing the top five. Joey Colsten, Brian Malcolm, D.J. Hunt, Will Dietz and Corey Lowett completed the top ten.

For Geisler, it was her third career Modified victory at Five Mile Point Speedway. Her dad Ray was instrumental in her racing career. After his passing during the off-season she put her racing program on her shoulders and certainly did her family proud on Saturday with a dominating performance. The point championship battle was truly remarkable as all four drivers that entered the evening only separated by six points raced each other lap after lap as one position would determine the title outcome. The four players, Tonkin, Holland, Rochinski and Vauter did an outstanding job of racing hard and clean for such an important event.

The 20 lap Crate Sportsman feature event was epic. Gary Smith entered the evening with the point lead and an eight race Saturday night win streak intact. A bounty worth $1,000 was on the line for anyone that could beat Smith or for Smith to collect himself if he was able to win. Tommy Groover and Josh Landers led the field to the green flag in the 20 lapper. Landers, just twelve years old, took advantage of the high line to take the race lead. Ray Leonard, one of the top southern tier drivers took over second place on lap 2 and Smith charged from sixth up to third in just two laps as he looked to cash in on his own bounty. Leonard and Smith battled side by side, lap after lap as Josh Landers walked away from the field. On lap 12 Smith worked past Leonard and set his sites on Landers. By lap 13 Landers was now navigating lapped traffic as Smith quickly closed the margin. On lap 17 Smith was on the race leaders back bumper and with two laps to go Smith was underneath Landers for the race lead. Landers utilized a lap car to his advantage in turn one on lap 18 as he kept Smith from carrying his momentum to work past. Landers got passed the lapped car and Smith now regrouped and made an assault on the high side of the speedway. With one lap two go Smith made another bid but Landers was not phased and held his line and the race lead. At the checkers Landers held on for his first ever full Sportsman victory. He did so in beating the driver with the bounty after eight straight wins and grabbed a $1,000 in the process. Landers had the eye of track officials the entire race as his car was sparking in the drive line area. The 20 lap event went caution free as Smith wound up second and Leonard was third. Marty Goodwin and Seth Zacharias completed the top five. Landers was the 2022 Spring Series Champion in the Futures Sportsman class before moving into the full-fledged Sportsman division for the regular season. For Gary Smith second place was enough to secure his third straight Track Championship in the ultra-competitive division.

Jon Carpenter won his fifth straight Street Stock feature event and in the process became the 2022 Track Champion in the class. Doug Stack, Jr. was the early race leader logging the first 5 laps in the books. Carpenter, who started fourth was quickly applying the pressure during the early going and made his way up to second. On lap 6 Carpenter took advantage of a slower car to take over the race lead as Stack had his lead derailed. Carpenter went on to lead the balance of the race and get the win. Stack stayed close throughout but could never seriously re-challenge for the race lead. Doug Stack, Sr. wound up third with Doug Polhamus and Gene Sharpsteen completing the top five.

Kurtis Stickle and Charlie Towner entered the evening one and two in the Factory Stock championship point race. The duo started in the front row for the start of the 20 lap feature event. Towner jumped out to the race lead but Stickle took over on lap 2. Stickle led the entire distance to record his second straight win and lock up the Track Championship. Towner and Kevin McDonald remained within striking distance throughout and came across the finish line in that order. Todd Sutliff had a breakout season as he had another solid finish in fourth. Mike Chilson finished fifth.

Jared Green led wire to wire in the 20 lap 600 Modified feature event. In the process Green locked up the Track Championship. Josh Towner, Dave Brown, Chuck Lohmeyer and Zach Mills were the top five finishers. The race was slowed by five caution periods.

Danielle Smith won the Futures Sportsman Track Championship after her third place finish in the 20 lap feature event. Smith was the race leader for lap 1 but Derrick Shaffer took over the point on lap 2. Shaffer was looking for his first win in the division as he set a rapid pace out front. Alex Smith moved into second place on lap 3 as he and Shaffer had a great battle for the race lead. On lap 16 Alex Smith took over the race lead and went on for his second win in three weeks. Shaffer finished second with Danielle Smith, Joe Buchanan and Buck Brown completing the top five. The race was slowed by only one caution.

Scott Beach led every lap of the 15 lap FWD Four Cylinder Expert feature event on Saturday. He entered the evening tied for second place in the point standings with Mike Jenks. Dave Simms came into the night as the point leader and left with the 2022 Track Championship. His fourth place finish was enough to secure the title. Beach held on despite his car over heating during the final several laps. Brian Salmini, Jeff Hayes, Simms and Jenks completed the top five.

Ethen Maynard capped off his dominating year in the FWD Four Cylinder Novice division by winning the 12 lap feature event and taking the Track Championship. Maynard led all twelve laps on the way to the win. Aiden Fabien and Austin Slater finished second and third.

COUNTER POINTS…It was emotional night all around at the speedway as this was likely the final Season Championship Night to occur at Five Mile Point Speedway…All of the Track Championships had even more meaning this year…Despite the importance of this year’s title races all of the drivers in every class did an outstanding job of racing clean and enjoying the evening…For Aleia Geisler the victory was certainly emotional as it was her first feature win without her dad…Her win came over the top four drivers in the final 2022 point standings and none of those four were ever really able to seriously challenge for the race lead…Gary Smith was as happy for Josh Landers holding him off as he was about his own accomplishment of winning three straight titles…Smith was genuinely happy for the young twelve year old driver in victory lane…For Brett Tonkin, his return to Five Mile Point Speedway in 2021 paid off as has now won back-to back Modified Championships…Five Mile Point Speedway will host a five race Fall Series with dates to be announced this week…The culmination will take place on October 28th and 29th with the National Quarter Mile Dirt Track Championship Weekend…