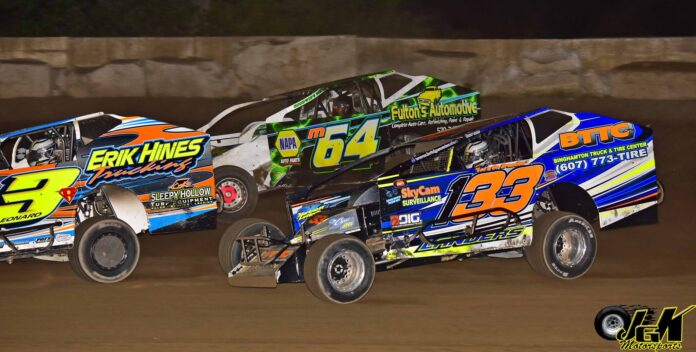 KIRKWOOD, NY-Seth Zacharias was the Crate Sportsman Champion of the 2022 Spring Series at Five Mile Point Speedway.  On Saturday he left the speedway as the point leader of the Fall Series after his victory in the 25 lap Crate Sportsman feature event.  The victory was worth $1,000.  Jon Carpenter was the Street Stock winner for the sixth straight time.  After winning the title of 2022 Track Champion during the regular season Carpenter is off to a good start in the Fall Series.

Gary Smith, the 2022 Track Champion in the division started eighth in the field and was quickly making his way forward during the early going.  He and Fox had a spirited battle for the second spot throughout as this allowed Zacharias to pull ahead of the field.  Season Championship race winner Josh Landers patiently ran in fourth waiting for any error between Fox and Smith.  After the initial caution the race went yellow free and Zacharias was never challenged out front as he was on rails.  Smith tried all routes around Fox but Fox was up to the challenge.  At the finish it was Zacharias, Fox, Smith, Landers and Doug Polhamus.  Polhamus has made a solid transition from the Street Stock division where he was a multi-time champion.

Jon Carpenter led wire to wire in the 20 lap Street Stock feature but it was anything but easy.  The top four drivers were within inches of each other the entire race. Carpenter and Doug Stack, Jr. had a tremendous race for the lead.  Stack had to be careful though as every bid he made for the lead his dad was making a challenge on him for second place. Trevor Dudley ran the outside with the leaders and was three wide early for the race lead.  At the outcome Carpenter had enough for the victory.  Stack, Jr. and Stack, Sr. wound up second and third.  This was exactly how the top three finished at the last race on Season Championship night. Dudley and Jakob Ingham completed the top five slots.

The Factory Stock 20 lap feature event may have been the race of the night.  The race went caution free and saw three lead changes out front. Brad Chilson led early from laps one through three.  On the fourth lap Kevin Garland and Dominick Albanese went three wide for the race lead with Chilson in the middle. Garland took over the point but he immediately had to contend with twelve year old Albanese for the point. Albanese took over the lead on lap  5 and never looked back.  The battle for second through fourth and the battle for fifth through seventh were three wide lap after lap on the quarter mile.  Justin Slezak mad his return to the division and after starting eighth he began to advance during the second half of the event.  On lap 14 he moved past Garland for second place but Garland continued to battle back.  At the finish Albanese cruised to the win.  Slezak hung on for second with Garland in third.  Dominic Denue and Brad Chilson completed the top five.

The Futures Sportsman had another great race in their 20 lap main event. Steve Winsor led the majority of the race and was looking for his first Five Mile victory. He and Joe Buchanan had a tremendous battle up front for the race lead.  As they battled for the lead Derrick Schaffer, Danielle Smith and Davin Green had a great race of their own.  During the second half of the race Schaffer began to set his sites on the race leaders as he joined the race for the win.  On the final lap Buchanan took to the high side of the speedway as Schaffer went low.  The leaders raced three wide for the win with Buchanan gaining the advantage in turn three.  Schaffer wasn’t done as he took over second and tried to carry the momentum under Buchanan.  At the wire Buchanan got the win over Schaffer.  Winsor had to settle for third after a great drive. Smith and Green completed the top five.

The 600 Modified 20 lap feature event was a wild one during the early going as five cautions flew during the initial five laps.  When things settled down the racing was outstanding as the cars raced three and four wide on the quarter mile. Justin Ladue raced to his first ever Five Mile Point Speedway win after leading the entire distance.  He was pressured throughout by Brenton Miller and Brett Gray as they tried all routes around but could not take the lead.  Chuck Lohmeyer had a great run from his starting spot deep in the field. He finished fourth.  Jared Green, the 2022 Track Champion broke into the top five early but was spun and restarted 17th on the field.  Green rallied to finish fifth.

Kenny Underwood brought a brand-new car to the track for the start of the Fall Series.  Underwood destroyed his car in a wild last lap finish in the Four Cylinder Expert division earlier this season.  Underwood made a statement by leading all 15 laps and collecting the $400 winners share on Saturday.  Brian Salmini ran in second throughout the event and finished second.  Colin Mills, David Jenkins and Dakota Fuller completed the top five.

COUNTER POINTS…After heavy rains and flooding through Wednesday of the race week track crews worked tirelessly to provide a great track surface once again on Saturday…The first Fall Series Race saw tremendous racing in all of the classes…Racing returns on Saturday, September 24th with race number 2 of the Fall Series…The Modifieds will be in action on that night with a racing paying tribute to the memory of Don Beagell, Jr. who passed away ten days ago…Beagell, who drove #29 was one of the Original Greatest 50 Drivers of All-Time at the speedway and the President of the Southern Tier Stock Car Club in the late 60’s…He also owned Don’s Auto Parts/Automotive Mall in the area…The Modified race will be 29 laps paying $2,900 to win with bonus lap money posted…