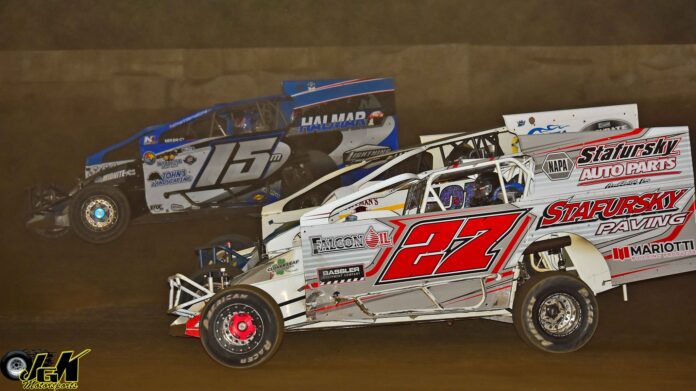 KIRKWOOD, NY-Five Mile Point Speedway will honor the memory of Don Beagell, Jr. this Saturday, September 24th.  A special Modified 29 lap event will take place paying $2,900 to the winner.  There will be a special Modified “Dash for Cash” presented by the Beagell Families as well.  Racing will begin at 5:00 p.m. this Saturday.

Don Beagell, Jr. made a huge impact on the northeast racing scene during the 1960’s and 70’s as a driver.  He also made a big impact in many other ways.  Beagell was the President of the Southern Tier Stock Car Club.  The club helped to operate some of the area tracks in the 1960’s.  Beagell was the owner of Don’s Automotive Mall and they sponsored many race events at all of the area speedway’s for decades.

The Modified 29 lapper will be a draw- re/draw format for starting positions.  The Modified 29 lapper will pay $2,900 to win, $2,000 for second, $1,200 for third and a minimum of $200 to start.  There is a Modified “Dash for Cash” which will pay a minimum of $500 to the winner with all starters getting a share of the $1,200 heat winners purse.  Dale and Sue Smith have posted a $290 Halfway Leader Award to the leader of lap 15 in the race.  Lap sponsorship bonus money is posted throughout the 29 lap event.

A great mix of talent is expected to converge on the quarter mile oval in all of the divisions.  For the Modifieds, the race will serve as one of two final events for the season.  The last coming on Saturday, October 29th as part of the National Quarter Mile Dirt Track Championship Weekend.  That 72 lap event will pay $7,200 to the race winner.

The Crate Sportsman will once again race for a $1,000 to win as part of the Fall Series.  Seth Zacharias was the winner of race 1 for the Fall Series.  Street Stocks, Factory Stocks, Futures Sportsman, 600 Modifieds, FWD Four Cylinders and Slingshots will be part of a busy schedule on Satutrday.

This Saturday’s racing program will also serve as race number two of the five race Fall Series at the speedway.  Racing is scheduled to begin at 5:00 p.m. for the support divisions.  The Modifieds will hit the track later in the program.  You can find a full order of events on our website.

For additional information please log on to www.5milepointspeedway.com.  The full order of events, pricing and all details can be found there. You may also phone us at 607-775-5555 for additional details on this weekend and the full 2022 racing season.