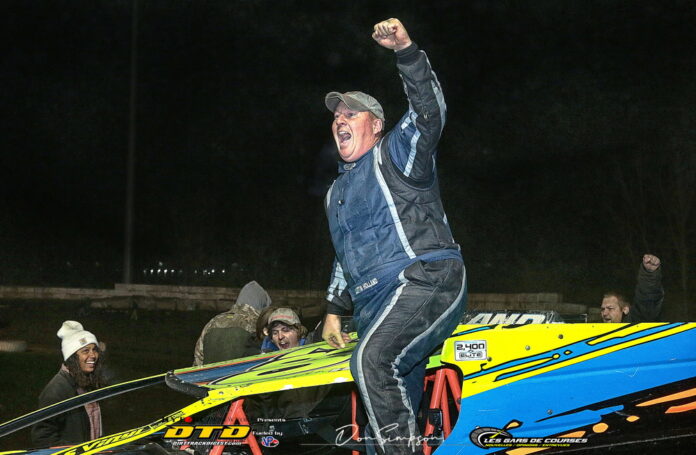 KIRKWOOD, NY – Justin Holland has called Five Mile Point Speedway his racing home for his entire career. In what may be the Speedway’s last dance, Holland took home his biggest win yet, claiming a $7,200 payday in the Southern Tier 72.

Nick Rochinski paced the field for much of the event, but came under fire from Holland around halfway. On lap 57, Holland went up top and got around Rochinski, with Dave Marcuccilli soon becoming Holland’s newest challenger. After a brief battle on a late restart, Holland emerged victorious.

Despite the win, the race did not shake out as Holland planned. Holland opted to run softer compounds on both rears, and initially didn’t plan on running the whole distance with that set. Holland noted the only car he knew of on the same right rear was Dillon Steuer, who blew a right rear tire with 23 laps to go.

“We were prepared to pit with 25 laps to go,” Holland said. “I knew we were going to chew up a tire, we planned on it. I babied the car, didn’t slide the car, drove in on the top and cut to the bottom, everything to save. I got to the lead and thought I couldn’t pit, so I decided to run it. I had softer rubber than almost everyone else, and my tires still looked better than the other guys.”

On a restart with four laps to go, Marcuccilli went to the top and drove by Holland in a hurry. One set of turns later, Holland returned the favor and went back to the lead.

“I was still taking it easy,” noted Holland, regarding being passed by Marcuccilli. “I never pushed the car to its limit, I never gave it it’s all. I literally rode, and rode, and rode. When I saw Dave pass me, I knew I finally had to go. I guess I was being a little too conservative and it almost cost us.”

As mentioned prior, this may be the final race held at Five Mile Point Speedway. If Saturday night’s feature was truthfully the final event at the track, it is only fitting that an experienced track regular held off a host of invaders to take the checkered.

“I started racing Sportsman here in 2006, it’s where I got my first career win,” stated Holland. “I’ve ran a lot here, this is my ninth Modified win here, got a point championship. I got a lot of laps around here and know the track, it’s been home for me and that’s why we were good. If it ends up being the last one, it makes it a lot more special. I wanted to win the points this year and lost by three, it was really disappointing since it was the last season, but this fixes that for sure.”