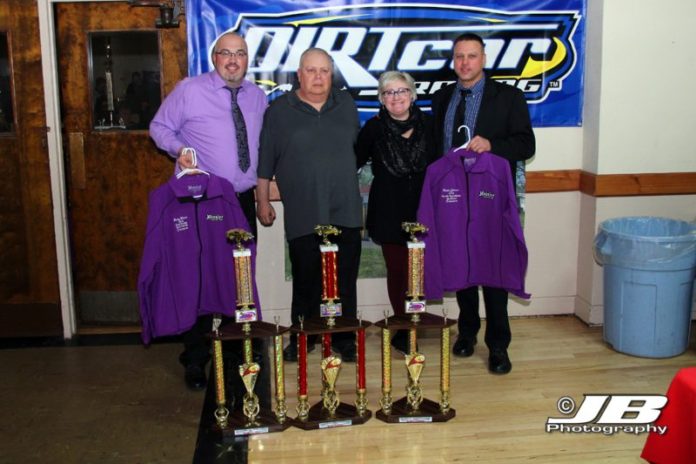 FONDA, NY – The management team of Demitraszek Enterprises recently celebrated the 2016-racing season with the annual awards banquet, honoring everyone for their successes this past season. The banquet was held on Saturday, December 3 at the Amsterdam Elks Lodge in Amsterdam, NY and this year for the first time ever was a joint effort between Demitraszek Enterprises two tracks, the Glen Ridge Motorsports Park and Fonda Speedways along with the Mohawk Valley Vintage Dirt Modified Series (MVVMS).

The entire Demitraszek family, along with some other people who volunteered their help, put on a delicious homemade buffet style meal at the banquet with all of the food being made by the Demitraszek family and their volunteers! It was a huge effort put forth by the family to do all of that work for the large crowd on hand proving that the family isn’t afraid of a little “hard work” which is what racing is all about.

Pete Demitraszek welcomed the crowd to the banquet before the delicious meal was served saying: “We want to thank all people, the racers, the fans, the crews, thank you to everyone who helped to make the 2016 racing season a success at both Glen Ridge and Fonda. I want to also thank David and Jackie Lape along with their crew for all of their hard work on the Fonda Speedway Museum this year because without them preserving the history of racing at Fonda there wouldn’t be anything left. It is also the time of the year to think about the people that we have lost this year both in our regular families and our racing families and also to pray for the troops and support them while they are away from their families.”

Awards to the drivers in the point standings at both tracks were given out first after dinner was completed beginning with the Glen Ridge Cruiser division where Dan Haslun (third place points) and Chris Andrews (track champion) were present to accept their awards. For Andrews it was his first career title in the Cruiser division at Glen Ridge.

Next were the drivers in the pro stock division with Luke Horning (fourth place points), Jason Morrison (second place points), and John Roese (track champion) were on hand to accept their awards. For Roese it was his first career title in the division at the “Ridge”.

The entire top 10 in the Glen Ridge modified division were either present of had a representative on hand to accept their awards including Al McCoy (10th), Ritchie Price (ninth), John Lutes Jr. (eighth), Bobby Vedder (seventh), Jeff Rockefeller (sixth), Shaun Pangman (fifth), Craig Hanson (fourth), Josh Hohenforst (third), Bobby Varin (second), and Jeremy Wilder (track champion). For Wilder it was his second title at Glen Ridge after also winning it back in 2012.

Next up were the point standing awards for the Fonda Speedway with Brian Calabrese (fifth place points), Mike Peek (fourth place points), and track champion David Manchester on hand to accept the awards in the Rookie Sportsman division.

Next in line were staff awards with the Preservation Award going to Buck Gasner, Tom Coughlin, Randy Colegrove, Joe Achzet, David & Jackie Lape, and Ashley Abeling who is in charge of the Kid’s Club at both Glen Ridge and Fonda.


Buck Gasner completed the awards ceremony by honoring the champions in the two divisions of the Mohawk Valley Vintage Dirt Modified Series (MVVMS) as Don Greco (modified) and John Constantino (sportsman) were presented their awards.

In conclusion, Pete Demitraszek thanked his entire family for their help in the task of running both the Glen Ridge Motorsports Park and Fonda Speedways.

“To all of my family, you have been critical to our success at both tracks this year and there are no words to describe my gratitude to you,” he said. “Looking forward to the car show in March on St. Patrick’s Day weekend and I wish everyone a Merry Christmas and a Happy New Year.”

For announcements concerning the 2017-racing season at both the Glen Ridge Motorsports Park and Fonda Speedways please go to their respective websites www.glenridgemotorsportspark.net and www.fondaspeedway.com