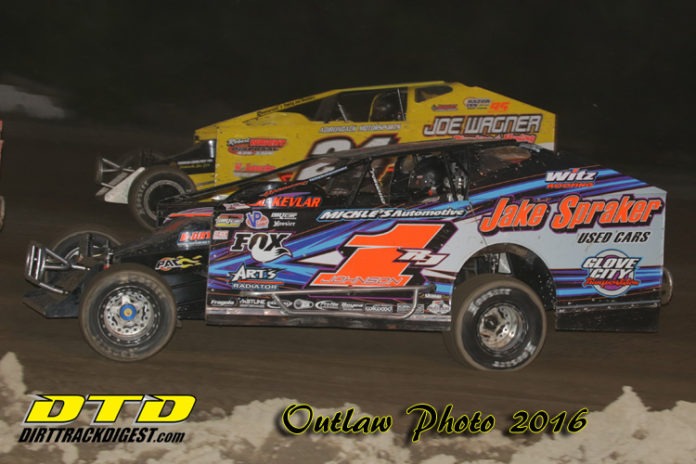 FONDA, NY – On Saturday evening January 28, the New York State Stock Car Association (NYSSCA) celebrated its 48thannual awards banquet at the Polish Community Center in Albany, NY. A total of over 350 people filled the banquet room as drivers, owners, fans, and sponsors celebrated the accomplishments of their race teams for the 2016-racing season. Master of Ceremonies for the event were John Stanley and Dan Martin.

Balough had some history at Fonda winning twice in the modified division on July 9, 1974 and October 12, 1974.


Jensen was crowned the Late Model Track Champion at Fonda in 1982, winning 12 features in the division which ran at the “Track of Champions” in 1963 and then again from 1968-1982. Jensen also had four feature wins in the 320-Modified division, which ran at Fonda from 1982-1987 with all of the statistics coming from the book FONDA!

Ody’s 100th career win came in a legends car at Fonda on July 7, 2007 and Fonda is where his first ever win came as well. Danny was a big advocate for the IMCA division in the area and was very successful in the class at Fonda with a career total of seven wins in the division there. He also had three wins in the pro stock division (known as the street stock division at the time) at Fonda and was crowned the champion in the division back in 1981.

In all, Danny ended up with a total of 102 wins, 15 track championships, and two national point championships during his racing career. After he was done racing, Danny became a historian of the sport with his “Lost Speedway” videos as he tried to preserve the history of tracks that are no longer open.

CAR OWNER OF THE YEAR – JAKE SPRAKER – a dream season for the car owner out of Gloversville, NY with two of the most popular drivers at the Fonda Speedway in his cars Ronnie Johnson (modified) and Rocky Warner (sportsman) who both won titles in their respective divisions at the “Track of Champions” in 2016. Between the two drivers, they won five track/series championships at seven different tracks including Fonda.

NYSSCA AWARD OF EXCELLENCE – JOSH COONRADT – put up numbers in the street stock division that are second to none with a total of 22 wins (14 at Fonda and 8 at Albany Saratoga), 30 top 5’s, and 34 top 10’s in 34 starts in 2016. Coonradt is a third generation driver who will be racing pro stocks in 2017 and the award was a very special one to him after the loss of his father Darryle and his grandfather Harry.

DEDICATION TO RACING IN MEMORY OF HARRY PEEK – JOHN KOLLAR – John is celebrating his 50th year in racing and started his racing career in 1968 in his famed #10%. In 1970, he got his first win on the asphalt at Utica Rome and after 28 years of trying, he got his first win at the Fonda Speedway on July 15, 1995.

Kollar had three wins in the modified division at the “Track of Champions”, the last one coming on August 1, 1998. After a bad wreck at Fonda in 2000, Kollar decided to retire from driving and became a car owner with his most recent driver being Tim Hartman Jr. Kollar won his first NYSSCA award back in 1969 for being the Most Improved Driver at Fonda.

“I won my first ever heat race against Harry (Peek) at Fonda,” Kollar said after accepting his award. “I want to thank my father Larry, another NYSSCA award winner tonight Andy Romano who did a lot of work on my cars over the years and who I bought cars off of as well, Bruce Dostal, and Jim & Dianne Boehler.”

DEDICATION TO RACING JIM LANGENBACK MEMORIAL AWARD – KENNY GATES – An award named after the late Jim Langenback who raced for 49 years and won over 150 races during his career.

“When Jim (Langenback) raced at Fonda we pitted next to each other and I also raced the DIRT Series with him so to win this award in his memory is truly an honor,” Gates said. “I started my career in 1993 at Fonda and my goal was to just win a race at Fonda and to race where people like Lou Lazzaro and Jack Johnson raced. To have five championships (2004, 2007, 2008, 2009, & 2016) and 65 career wins (which is on top of the all-time win list in the division) at Fonda is truly special to me.”

DEDICATION TO NYSSCA IN MEMORY OF ARTY MCCARTY – BOB JAMES – the McCarty family presented the award to Bob who is a longtime supporter of NYSSCA and currently a board member of the organization.

“I started videoing races at Fonda 25 years ago and I look forward to many more,” James said after accepting his award.

LIFETIME CONTRIBUTION TO RACING IN MEMORY OF KENNY SHOEMAKER – ANDY ROMANO – Master of ceremony John Stanley introduced Romano as the award winner as Stanley himself is now involved in racing due to Shoemaker’s influence.

“I started racing in 1957 and Kenny (Shoemaker) actually raced one of my cars at one time,” Romano said. “My father Joe actually got involved after I did and then Mike and AJ (Andy’s two sons) came in after me and they were two great racers. Kenny (Shoemaker) was the best; he was a tough guy that I learned a lot from.”

The Romano name has been around the “Track of Champions” for many years with Joe (Andy’s father), Andy, Mike, & AJ all making their presence known at Fonda over the years. Andy has two wins at Fonda coming on May 17, 1975 and June 26, 1993 while AJ has 34 wins in the big block modified division.

Andy Romano will be a car owner again in 2017 with Peter Britten and Jeremy Wilder as his two drivers.

Awards handed out to Fonda Speedway drivers in all of the other divisions at the NYSSCA banquet were as follows:

DRIVER OF THE YEAR