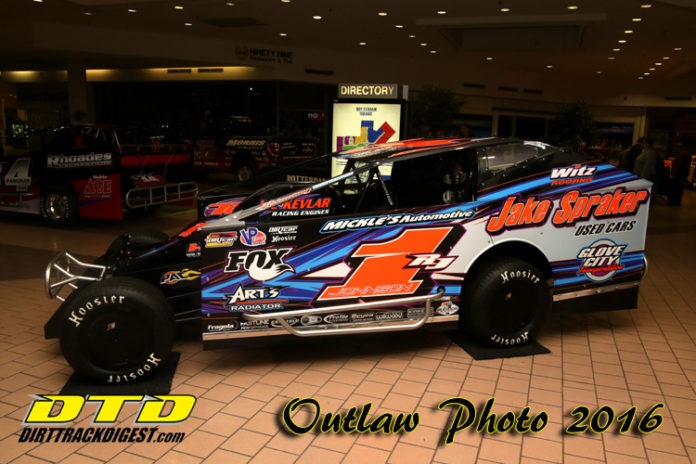 FONDA, NY – On Friday, March 17 through Sunday, March 19 at the Via Port Rotterdam Mall, during normal business hours, the 2017 Northeast Auto Racing Expo, hosted by the “Track of Champions” Fonda Speedway, takes center stage as racers from both the Glen Ridge Motorsports Park and Fonda Speedways get to show off their race cars to the public for the first time before they take to the track next month.

The car show is a great time for the fans to go and take a look at all the new paint schemes for the 2017 season and also for the racers to show off the sponsors who make it possible for them to race.

A press release put out by DIRTcar out of Concord, NC on March 2, 2017 stated that starting with the first events of 2017, any participants of a DIRTcar-sanctioned event will be required to hold a DIRTcar Racing membership. Any division without a 100 percent membership participation will be at risk of violating the sanction agreement and suspension of the sanction by DIRTcar Racing.

The practice of a mandatory membership is common in sports, including motorsports, creating a mutually beneficial relationship between the drivers and the point fund, rulebook, official decisions and appeals.

DIRTcar members participate in state, regional, and national divisional point funds for drivers and tracks; where in 2016, over $550,000.00 was distributed to members. Members also receive discounted entry fees and/or discounted pit entry fees at selected events.

One benefit that every driver hopes never to take advantage of is the $50,000 DIRTcar Member Benefit Supplemental Participant Accident Policy over a track-supplied deductible of $15,000.

“As you know, DIRTcar has MANDATED that all drivers have a DIRTcar license so on Saturday at the car show we will be giving $10.00 off all DIRTcar licenses purchased,” Demitraszek Enterprises own Pete Demitraszek stated recently on the Fonda Speedway Facebook page.

For the third straight year the Pit Crew Challenge will return at the car show with teams doing their best to be the quickest at the contest which again will be run by Shaun Pangman who does a great job at organizing the event and getting prizes to award the participants in the event.

“Our Fonda car show is coming up fast and Thursday night will see the procession of cars entering the Via Port Rotterdam Mall for a GREAT weekend show,” Pete Demitraszek said. “Thanks and I’m looking forward to meeting all the drivers and fans at the show.”

For more information about the Fonda Speedway “where history is made on Saturday nights” and the Glen Ridge Motorsports Park “the fastest quarter mile on dirt” as plans for the 2017 season are announced for both tracks under the Demitraszek Enterprises banner, you can go to their respective websites www.newfondaspeedway.com and www.glenridgemotorsportspark.net