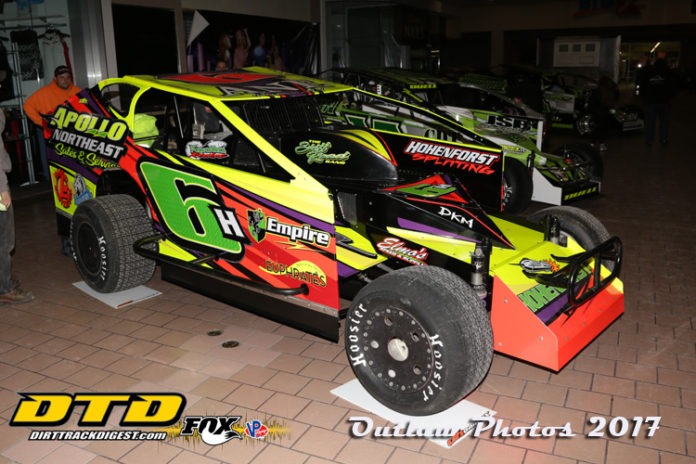 FONDA, NY – On Friday through Sunday March 17-19, Demitraszek Enterprises who promote racing events at both the Fonda Speedway and the Glen Ridge Motorsports Park got a start on the 2017 racing season with the annual Northeast Motorsports Expo at the Via Port Mall. A total of 73 racecars from various racing divisions were on display at the mall as the great looking cars filled the aisle ways of the facility.

The car show is a great time for racers to show off their new paint schemes for the 2017 racing season and is great exposure for the race teams and all of the sponsors on the racecars. Many of the drivers were on hand during the show to sign autographs and have their pictures taken with their fans and the racecar. Many of the race teams handed out photos and children were also seen getting in the racecars as a photo opportunity for their families to remember the moment.

The third annual “Pit Crew Challenge” was held this year at the car show after being organized by modified competitor Shaun Pangman. Winners of the event were Doug Sheely, Jeff Sheely, Dylan Sheely, and Chip Constantino while the pit crew of Rocky Warner placed second and the pit crew of Jessey Mueller placed third. Prizes awarded for the pit crew challenge were four pit passes to their choice of either Fonda or Glen Ridge, two $50 gift certificates to Elmo’s Speed Shop, and a $50 gift certificate to Mike Romano’s Andy’s Speed Shop.

Demitraszek Enterprises own Pete and Matt Demitraszek were on hand all weekend to answer questions about the upcoming season while their staff were selling DIRTcar licenses, pit passes to both tracks, and general admission grandstand passes as well. Schedule cards to both Fonda and Glen Ridge were available as handouts at the show.


The New York State Stock Car Association (NYSSCA) was at the show selling memberships to the organization, which has a benefit fund to help members who were injured in race related accidents. The fund has easily become one of the most important functions of the organization, which is open to not only drivers but crewmembers, car owners, track officials, track employees, and fans as well.

Bobco Video was on hand showing racing videos all weekend long and selling DVD’s of the racing action as well. Bob James who owns Bobco Video also received an award from Fonda and Glen Ridge promoter Pete Demitraszek for his 25 years of videotaping events at the “Track of Champions” Fonda Speedway. The plaque on the trophy that was presented to Bob read “In recognition and appreciation for your twenty five years of dedication and diligence videotaping the racing action at Fonda Speedway”.

JB Photography, Jeff Karabin and Brittany Nelson, were on hand at center court as well selling photographs and they were also seen all around the mall taking shots of the racecars that were on hand at the show.

There was also entertainment at the center court of the mall at various times during the weekend featuring an “Elvis” impersonator and Fonda Speedway’s own starter Joe Kriss who is known for his rendition of the National Anthem which he performs at Fonda before the racing action begins and also his performances at area Karaoke events.

With the car show now complete the attention turns to the weather with hopes that it will get warm enough to melt all of the snow that fell in the northeast about a week ago so that Fonda and Glen Ridge can open up on time. According to the schedule cards handed out at the mall during the car show, Glen Ridge will have warmups and inspections for all divisions on Friday April 7 & Friday, April 14 while Fonda will do the same on Saturday, April 1 and Saturday, April 8. The admission for the pits on those days will be $20 while grandstand admission will be free if you bring an item for the SPCA.

On the Fonda and Glen Ridge Facebook pages, Demitraszek Enterprises officials had this to say regarding the car show, “I want to thank all of the drivers, owners, crews, and fans who attended the Fonda Car Show this past weekend. We had a great turnout of cars and fans and the excitement of opening day was in the air. I would also like to thank Tina and Jade of Via Port Mall and the security staff for making our entry and exit painless and all the people who helped put the show together, get the cars in and out (you know who you are) and worked the show. Thank You.”

For more information regarding the Demitraszek Enterprises managed speedways you can go to their respective websites www.glenridgemotorsportspark.net or www.newfondaspeedway.com. Both websites are all new for 2017 with all-time win lists included on the Fonda website along with some other statistics that may interest the fans.