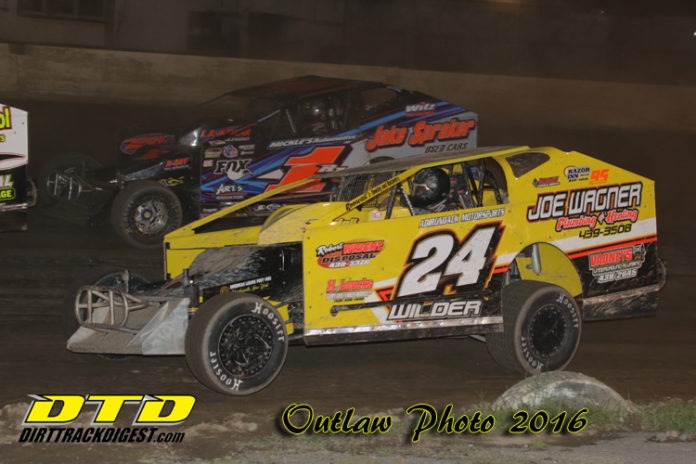 FONDA, NY – With the blizzard of 2017 hitting the area in mid-March, the “Track of Champions” Fonda Speedway has decided to cancel the practice session, which was scheduled for Saturday, April 1.

“With snow still covering almost ninety percent of the famed Fonda Speedway we have decided to cancel off the practice scheduled for April 1”, promoter Pete Demitraszek put up on the Fonda Speedway Facebook page. “The Ice Jam has also been moved to April 15.”

Weather permitting there is a practice scheduled on Saturday, April 8 for all divisions with a $20 fee for the pit area and free grandstand admission for anyone donating an item for the SPCA with the Ice Jam set to open the 64th season of competition at the famed Fonda Fairgrounds oval on Saturday, April 15.

Good news for Fonda Speedway fans who never got a copy of the book FONDA! An illustrated and Documented History of Fonda Speedway by Lew Boyd, Andy Fusco, and Jim Rigney when it was originally released as part of the 50th anniversary of the “Track of Champions” in 2003.


The book has been reprinted according to one of its authors, Lew Boyd and is available for purchase through the company that it was published by which is Coastal 181 for $24.95!

The book was written as part of the New York track’s 50th birthday celebration in 2003, the book has close to 400 pages and 400 photographs covering all aspects of Fonda’s rich tradition.

Research involved discussions with hundreds of key players from the past to the present, including detailed interviews with figures such as Steve Danish, Bill Wimble, Richard Petty, Jack Johnson, Brett Hearn, and Bobby Varin.

Tall tales are told of notable races and interesting off-track happenings. Appendices provide a compilation of racing records for all major divisions.

This is the original edition, printed in its entirety without corrections or updates. It is available by going to the Coastal 181 website www.coastal181.com and according to Mr. Boyd, the book will be available for purchase at the Fonda Speedway Museum when it opens for the season.

The book is a must have for all people who consider the historic fairgrounds track that the Fonda Speedway has become through the years special to them.

For more information on the “Track of Champions” Fonda Speedway you can go to their newly designed website www.newfondaspeedway.com