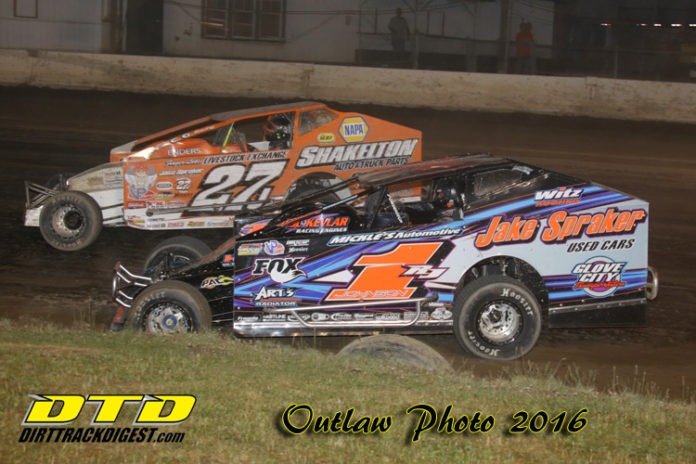 At the Northeast Motorsports Expo last month at the Via Port Mall, Bobco Video owner Bob James was given an award for his 25 years of videoing racing events at the “Track of Champions” Fonda Speedway.

The award was given to Bob by Fonda Speedway promoter Pete Demitraszek and the plaque on the front of the award trophy said: “In recognition and appreciation for your twenty five years of dedication and diligence videotaping the racing action at Fonda Speedway March 18, 2017.”

“The award is definitely special,” James said. “Who would think that someone starting out sitting in the grandstands back in 1986 would get the opportunity to be the videographer at the Fonda Speedway for the next 25 years?”

James started going to the races with his parents when his mother was pregnant with him, and when he was old enough to remember who the drivers were, his favorites were Harry Peek and Jack Johnson. However it was one other driver who gave him his first kiddie ride that he will never forget.


“Lou Lazzaro gave me my first kiddie ride and also became one of my favorites,” James said. “I will never forget that.”

GETTING HIS VIDEO GRAPHING START

James started videoing racing events at Fonda back in 1986 when he got his first video camera. At that time he would either go on the infield or in turn four to do his videotaping. At the midpoint of the 1992 season at Fonda, the videographer at Fonda left, and James was asked to take over at that time.

“I knew promoter Seymour Hayes and he came up to me and asked me to be the next videographer at Fonda and I’ve been there ever since,” James said. “I’ve only missed two nights at Fonda back in 2000 when the USNA Series was running but I was able to make it back to Fonda to video the feature events the night of the USNA race at Albany Saratoga. I remember that because Dave Lape won that night.”

The videographer at Fonda before James was from television station WGLV in Gloversville and back then they were selling race tapes in VHS form where now they are in DVD form.

“When I first started videotaping at Fonda it was from the top of the video booth in turn four,” James said. “In 1994 when I moved up into the main tower I also started doing video replays which race officials started to use to review what happened during a wreck.”

Before James got started videoing races at Fonda he collected VHS tapes of different racing events from all over the place and he has quite a collection built up.

“I collected certain races, like the 200-lap events from Orange County, Lebanon Valley, Rolling Wheels, and Weedsport and any Jack Johnson wins which I have a lot of,” he said.

GETTING STARTED AS A CAR OWNER

James started owning a race car when he and his cousin Hondo Carpenter got into the sport back in 1996 as partners. Their first car was purchased in 1996 which Hondo raced in the street stock division at Albany Saratoga for one year in 1997. Chris Fain built them their next street stock which Hondo ran at Fonda and Albany Saratoga for two or three years before moving up to pro stocks and running only at Fonda.

“Hondo and I were able to get down to Charlotte for the original pro stock race,” James said. “Hondo always wanted to run at Syracuse but never made it there before he passed away in 2005. One special thing about Hondo was that he cared about people, he cared about racing, and he would do anything to help you.”

Hondo’s statistics at Fonda included five wins in the street stock division to go along with four wins in the pro stock class.

When Hondo was killed in a four wheeler accident in 2005, Kenny Martin Jr. finished out the 2005 season in the car and also ran for James during the 2006 season as well. From that point on James and Martin became partners in the #93 racing team just as James and Hondo were prior to that. They have been partners ever since.

2017 will be a special year for the James/Martin Racing Team as they now have the car together that Hondo raced and will be using it this season.

“It is the car that we had at the Fonda car show last month,” James said.

Martin has been very successful in the pro stock division and has a total of three track championships at Fonda along with one at Albany Saratoga a couple of years ago.

Kenny’s son Sheldon also drove for the James/Martin Racing Team back in 2007 when they had a second car which Sheldon raced on the asphalt at Albany Saratoga when it was switched over from dirt to asphalt.

“That about broke the bank,” James said with a laugh.

When Lyle (DeVore) took over Albany Saratoga and switched it back to dirt again, Kenny decided he would race on Friday nights there in order to have the rest of the weekend to do other things and that is what they have done ever since.

For 2017 on the videographer side of things, BOBCO is going to switch things up a little as he will be going to Lebanon Valley on Saturday nights while Mike Phau will be doing the videography work at Fonda.
“Mike will do fine at Fonda because things run pretty smooth there on Saturday nights,” James said. “I have had Lebanon Valley now for three years and 2017 will be my fourth so it’s time for me to go down there. I won’t be staying away from Fonda forever, but at least for 2017 I will be at the Valley.”

BOBCO’s videography statistics are just as impressive as his two drivers statistics are as Bob has his 25 year tenure at Fonda to be proud of along with the fact that 2017 will be his 20th year of videoing the racing action at Albany Saratoga and also his 18th year for doing motorsports events at the Fonda Fair.

“I am pretty busy in the summer,” he said.

In closing BOBCO feels very fortunate to have had Hondo as one of his drivers in the past and now Kenny Martin Jr. as his current driver.