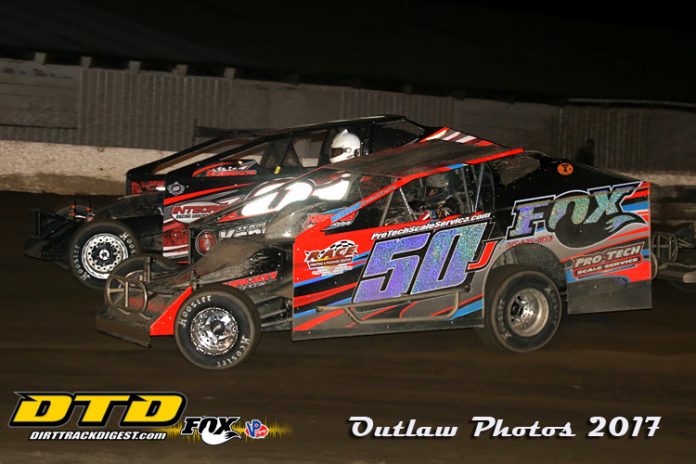 FONDA, NY – If you look on the Fonda Speedway website it states that the speedway is where “history is made on Saturday nights”. That could have never been truer than it was on Saturday evening as Justin Boehler collected his first career win in the modified division at the “Track of Champions”.

When the racing program began Saturday evening there was a total of 126 different drivers who had won modified feature events in the history of the Fonda Speedway. When Boehler won the $4,000 to win “Ice Jam” event on Saturday he became the 127th different driver to win at the “Track of Champions”.

Victory lane was full of family members, friends, crew members, and sponsors who celebrated the win along with Justin perhaps the most special moment being the hug that his parents Craig and Marie shared with each other. Marie also went around to everyone and hugged them as well for being part of their son’s special evening.

“I don’t think there are any words to describe this,” Boehler told victory lane announcer Toby LaGrange on checkerboard square when asked what that final lap felt like. “After running here at Fonda for a long time the last lap was a little overwhelming thinking about how special this could be.”

The pit area was full of race cars for the seven division racing program with a good crowd on hand as well as they braved the cool evening weather to attend opening night at Fonda and they didn’t leave disappointed as they witnessed some great racing.

Mike Maresca, Bobby Varin, and Billy Decker were the modified heat race winners and on the heads up start Maresca was to start on the pole for the 50- lap event. Electrical issues forced Maresca to miss the event however as the race car wouldn’t stay running when the cars exited the pit area placing Decker on the front row with Varin to start the event.

Decker led at the drop of the green flag but it was third place starter Stewart Friesen who got by both Varin and Decker to lead lap one. Two consecutive restarts at the completion of lap one, the first for Cass Bennett and Brandon Walters who ended up in the turn one wall, and the second on the Delaware restart for Scott Huber who lost a tire on the backstretch, slowed the event but Friesen was able to maintain the lead both times.

When the race did go green again Friesen continued to lead with Varin, Tim Fuller, Boehler, and Decker completing the top five and by lap 10 Friesen was already in lap traffic. Friesen was setting such a blistering pace that he was lapping cars in the top 10 by the 20th lap while Varin slowed in turn two on lap 22 while running second bringing out the caution. Varin was done for the night after going behind the wall in the pit area.

On the restart, Decker made a move from fourth to second as Friesen continued to lead with Fuller, Boehler, and ninth place starter Jeremy Wilder completing the top five. Wilder was able to get by Boehler for the fourth position with the top five at the halfway point consisting of Friesen, Decker, Fuller, Wilder, and Boehler.

Through numerous restarts during the next few laps, Boehler made his way back to the front gaining positions on each restart up to the second spot on a lap 31. Boehler’s lap times were getting faster as the race went on and by lap 38 Boehler’s lap times were actually faster than the leader. Coming out of turn four on lap 44 the leading car of Friesen blew a right rear tire, bringing out the caution and handing the lead over to Boehler.

Fuller was the new second place car on the restart with Wilder behind them in third with the final caution of the event coming out on lap 47 for defending modified track champion Ronnie Johnson who broke a rear end in turn two and slowed to bring out the yellow flag and one final restart.

When the green flag flew again, Fuller pressured Boehler for the top spot during the final three laps, but Boehler maintained his composure and ran his line to perfection to gain his first career modified win at the “Track of Champions” in the Pro Tech Scale Service #50J.

Legendary Fonda Speedway announcer Jim King was a part of another historical moment at the track as he was able to announce a first time win for another driver which he has done throughout his career as the “voice” of the “Track of Champions”. “There is nothing more exciting than a first time winner and I have been fortunate to have been able to announce a lot of them here at Fonda,” King said after the event.

Fuller, Wilder, 12th place starter Craig Hanson, and Friesen who pitted for a new tire and restarted the event at the rear on lap 45 completed the top five.

“On the final lap I had to tell myself that I’m the only one on the track, that it was just warm-ups, and stay focused,” Boehler said. “I have to thank my wife, my mom and dad because I couldn’t do this without them, and everyone who works on this race car. I love them all. I also have to thank RJ (Ronnie Johnson) and his crew because they were a big help to me as well.”

Chad Edwards, defending sportsman track champion Rocky Warner, and Mark Mortensen were the heat race winners in the sportsman division placing them in the top three starting positions for the 20-lap feature event. On the first attempt to start the event, six cars were involved in a wreck in turn one. All drivers were okay after the wreck with most able to restart the race at the rear of the field.

On the second attempt at the restart, Warner took the lead at the drop of the green flag with the final caution of the event coming out on lap two for a car who was in the turn one wall. Warner maintained the lead on the restart with sixth place starter Brian Pessolano the new second place car followed by Edwards, Mortensen, and 11th place starter Dave Constantino.

Constantino moved past Mortensen for the fourth position on lap three while Warner was in lap traffic by lap seven. A close call for Warner on lap 11 when he and a lap car got together but fortunately Warner was able to race on in the lead. With no more cautions during the event Warner cruised to the win, the 18th of his career in the division as he is the new leader on the all-time win list with the victory.

Pessolano, Constantino, Edwards, and Mortensen completed the top five at the checkered flag.

“We’ve had a rough start to the season travelling around a little bit with this car,” Warner said of his Jake Spraker Used Cars Teo car in victory lane. “But I think we finally have the bugs worked out of it now.”

Larry Neimiec led the first seven laps of the 12-lap rookie sportsman feature with heavy pressure from second place starter Mike Block. On lap eight on the inside of turn four, Block got by Neimiec for the race lead and went on to the win followed by Neimiec, Gary Derocher, Cory White, and EJ McAuliffe.

Defending pro stock track champion Kenny Gates, Jason Casey, and 2016 street stock track champion Josh Coonradt won heat races in the pro stock division placing them in the top three positions at the start of the 20-lap feature event. Gates was the leader at the drop of the green flag to start the event with the yellow flag out at the completion of the first lap for Jim Normoyle who wrecked hard in turn one. Normoyle was not injured but was done for the night with heavy front end damage.

Gates led on this restart with Coonradt the new second place car followed by Jason Casey. Coonradt and Casey swapped the second position many times during restarts after caution flags but by lap 12 Coonradt had the second position to himself and was pressuring Gates for the lead. Chuck Dumblewski moved up to the fourth position on lap 17 but the race for the lead between Gates and Coonradt was what everyone was watching.

Gates held on for the win, the 66th of his career in the division which leads the all-time win list, followed by pro stock rookie Coonradt who had an impressive debut in the division on opening night, Casey, Dumblewski, and Walt Brownell.

“Considering all the rain we had recently the track was in pretty good shape,” Gates said in victory lane. “We loosened the car up a little and it was on rails. It’s always good to start out the season fast and have everybody else chasing you.”

Dave Horning Sr. led all 10 laps of the street stock feature on his way to his all-time win list leading 56th career win in the division followed in the top five by Johnny Young, Joey Wilson, Jim Groncki, and Steven Young.

Ken Hollenback started the eight lap cruiser feature event in the third position and at the drop of the green flag moved to the front to lead the first lap. On lap four Hollenback broke the right rear tire/wheel off the car handing the lead over to PJ Bleau who led the remaining laps for his first career win in the division at Fonda over Chris Andrews, Pat McSpirit, Zach McSpirit, and Hollenback as only five cars competed in the event.

Brett Jaycox started the 20-lap CRSA feature event on the pole, took the lead at the drop of the green flag, and led every lap for his first career win in the division at Fonda over Tyler Jashembowski, Thomas Radivoy, Dana Wagner, and Josh Pieniazek.

Next Saturday, April 29th at the “Track of Champions” Fonda Speedway will be a regular show in all divisions along with a tribute to Steve Danish. Starting time will be 7:00 p.m. Be sure to check out the new and improved Fonda Speedway website at www.fondaspeedway.com with many new interesting items available to all racing fans.