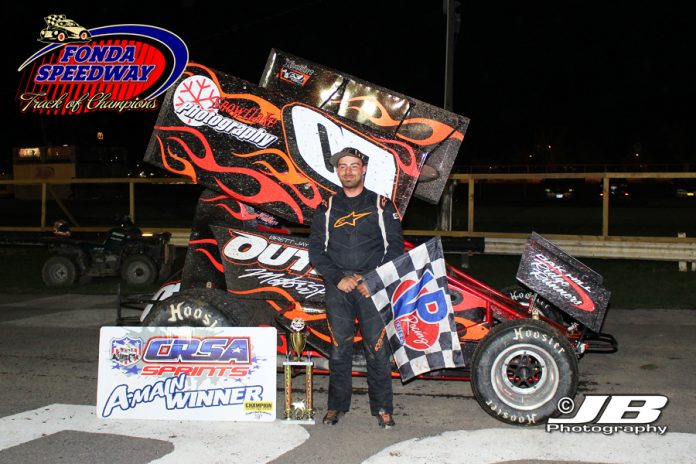 FONDA, NY – It was a cool and blustery spring evening along the Mohawk River. Despite Mother Nature’s efforts to chill hearts and minds, the CRSA Sprint Tour was able to warm things up a bit on the Track of Champions at Fonda Speedway. The RaceSaver 305 sprint cars helped to fill the pit area for the opening round of the 2017 CRSA Sprint Tour Presented by Super Gen Products with Champion Power Equipment. This was also the opening event for the Kennedy’s Towing Northway 90 Challenge.

Brett Jaycox, from East Durham New York, piloted his Outlaw Motorsports, Oakhill Ridge Runners, Snowflake Photos number 07 entry to the Fonda Speedway Victory Lane after a mostly clean and green twenty lap feature event. His biggest challenges came from the Johnny’s Service Station 98T of Tyler Jashembowski and Country Service Center 1Q of Thomas Radivoy.
Their-well calculated restarts were enough to real in Jaycox. But neither one of the young drivers could do anything to make a pass for the lead on the eventual winner.

Brett has been a committed CRSA competitor and he was very elated to score the win to start the 2017 season.

“It was an awesome run. We really needed a win and it was a great way to start the season. I would like to thank my Mom and Dad, my girlfriend Danielle, Warren’s Auto Body, Snowflake Photos, Oak Hill Ridge Runners, ESJ, and the tour sponsors for helping us get here tonight.”

Jaycox was able to lead every lap of the event that was slowed by two caution flags. One was for Killingsworth, Connecticut’s 2016 CRSA Rookie of the Year Sydney Prince as her H&R Coal, Richie’s Auto Service 14p slowed to a stop on the back stretch due to a fuel isse to bring out the first yellow. The second caution was brought out by Lake Ariel, Pennsylvania’s Eddie Strada. He had to limp his Norwegian Builders and Excavator 1 car back around to the pit area due to a flat right rear tire.


The CRSA Tour presented by Super Gen Products will head to Middletown, New York’s Orange County Fair Speedway this coming Saturday April 29th. This will also be the opening event for the 2017 Hard Clay Challenge Series.
Any businesses that would like to take advantage of this marketing opportunity by having their name on this series can send correspondence to mikeemhof@patriotsprinttour.com. More information on the CRSA Sprint Tour can be found at ww.crsasprints.com.