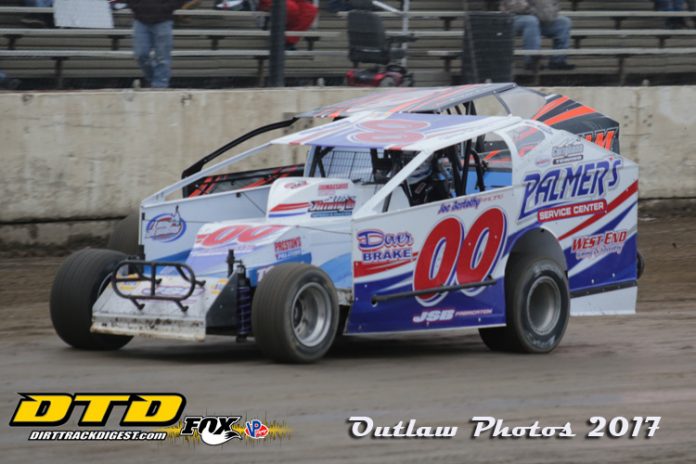 FONDA, NY – This Saturday, April 29 the “Track of Champions” Fonda Speedway will have a regular racing program in all divisions along with a tribute to 1988 Fonda Speedway Hall of Fame inductee Steve Danish.

Also please come to the Fonda Fairgrounds early and visit the Fonda Speedway Museum which is now open for the season to see some of the history of the “Track of Champions” right before your eyes!

According to the book FONDA!, to look at him you’d never know that Steve Danish wasn’t a professional race car driver. His neatly pressed tan driving uniform and meticulous grooming were quite a contrast to the “grease ‘neath the nails” look of many of his competitors. His dent free, immaculate, finely lettered and painted #61 stood out among many of the bent-up junkers it raced against.

But Steve Danish wasn’t a professional. By day, he operated his own business, Pleasant Valley Garage, in his hometown of Cropseyville, NY. For him, racing was strictly a hobby-a successful hobby-but a hobby nonetheless. When so-called “professionalism” crept into the sport by the mid-1960’s, Danish complained and quit. Steve Danish viewed time and effort-not the expenditure of money-as the honorable course for auto racing success.

Steve Danish was a proficient racer from day one. A late bloomer at age 30, Danish built his first stock car in 1949. He appropriated the #61 from Johnny Carpenter’s midget racing team, on which he’d been a mechanic. Danish hired others to drive his stocker at first, but soon believed he could do better himself. He was right. Before Fonda opened, Danish had already become an established winner at tracks like Metowee Speedway in Granville, New York and State Line Speedway near Bennington, Vermont.

In many ways, Steve Danish was quite a bit ahead of his time. He had a sponsor before anyone else, he’d take his race car to store openings and ribbon cuttings for autograph sessions. And he was the first area driver to wear a driving suit. “I tried to set a standard in appearance and in everything else I did,” Danish said in the book FONDA!. Not only was I the first guy with a sponsor and the first guy with a uniform, but I was the first guy to haul my stock car on a trailer.”

From the outset, Steve Danish was a solid supporter of Fonda Speedway. He was one of only a few people to attend the organizational meeting at Wallard’s Restaurant, plus the first practice and opening night. He fielded a pair of cars in the first race, #61 for himself and the #61Jr. for Hully Bunn. The #61 broke in the heat, sidelining Danish for the evening. It would be one of the few disappointments suffered by “The Cropseyville Courier” in what evolved into an incredible 1953 season.

Starting the second night, Danish assembled a run of five consecutive feature wins. He strung six more together later in the year. That, plus one additional win in between, made 12 for the season-a Fonda Speedway season win record that still hasn’t been topped, although Jack Johnson tied the mark in 1985 and Stewart Friesen came close to in 2015 when he had 11 feature wins. Danish easily took Fonda’s 1953 track championship and captured the 1953 point tallies at Metowee and State Line too.

Danish’s 1954 Fonda totals nearly matched his 1953 accomplishments as he was credited with 11 feature wins, including a record seven in a row. Still, his 1954 seven straight stands as a Fonda record, although Jack Johnson also matched that record in 1981 and 1985. “I definitely cheered for Jack when he closed in on the record, because I hoped that if someone was to break my records, it would be a local guy,” Danish said in the book FONDA!. Danish even donated a trophy to Fonda Speedway earmarked for the first man to surpass his records. Nobody’s claimed it yet.

Stock car racing in the early and mid-1950’s saw many significant changes in the motor department, due to newer and better engines being recurrently devised by Detroit’s manufacturers. And Steve Danish was on the cutting edge of each revolution. By way of background, the motor of choice for most stock car racers in the 1940’s and early 1950’s was the Ford flathead V-8.

The 1953 Ford flathead V-8 displaced out at 239.4 CID. The ’53 Ford OHV straight 6 was 13 cubes smaller, and had a horsepower rating that was far inferior to the flathead’s. Hence, nobody figured that sixes could run with the eights-at least until Steve Danish came along. As stunning as Steve’s mastery of Fonda was in 1953 and 1954, it became even more unbelievable once it was disclosed that he was doing it with a six cylinder motor. How in the world could a six banger consistently whip the eights? The answer was that Steve Danish had done his homework.

Chevy had introduced the Corvette sports car in 1953 and unveiled a new OHV 6 to power it. Unburdened by the flathead’s inherent in stroke, the Corvette 6 had an impressive displacement of 236 CID-a mere three cubes less than the Ford flathead V-8. More importantly, the new Chevy engine had a higher horsepower rating than the flathead Ford, it had much lower reciprocating mass, (which allowed higher RPM’s) and it weighed a lot less, facilitating Danish’s corner handling. The new motor wasn’t easy to come by. But Danish had connections. His sponsor was Bumstead Chevrolet, a huge dealership in Troy, New York.

Danish’s six provided an edge in 1953 and 1954 at Fonda. But even so it was about to be eclipsed by automotive technology. Danish sent Christmas cards to close friends in 1954 announcing that he would forgo his trusty six in 1955 in favor of an overhead V-8. His selection was the 1955 Buick Special 264 CID V-8. The high end General Motors lines-Cadillac, Oldsmobile, and Buick-had been toying with the new-fangled, albeit somewhat trouble-some overhead V-8’s since 1949. Buick’s 1955 version showed the most promise, according to publicists.

But this time, Detroit surprised him. The ink was barely dry on Danish’s Christmas cards when Chevy went public with its own 1955 version of an OHV V-8. Ford had also unveiled one on 1954. Lower in cost and eminently available, now any racer who wanted an overhead V-8 could get one. The widespread availability of the Chevy and Ford OHV V-8’s leveled the engine playing field. And with it, Steve Danish’s domination of Fonda subsided.
The 1955 season was a trying time for the once invincible Steve Danish. He crashed badly a couple of times, dropped out often, and recurrently second guessed himself on his Buick engine selection. “I bought that Buick new in a crate,” he recalls. “It had so much power that it would keep breaking axles and clutches. It had lots of low end torque, but it didn’t help me with RPM’s when I needed them. So I ended up selling it and went with a Chevy V-8 myself.”

“In 1956, I started to lose interest and was on the verge of having enough,” Danish says. He made a decision to stop fielding his own #61’s and to start driving for others. For the rest of the decade, he drove for owners like the Clark Brothers, Frank Trinkhaus, and Pete Hollebrand. He had occasional wins in the Clark #45 and Trinkhaus’ #62. Yet, Steve Danish was nowhere as successful driving for others as he had been driving for himself.

For the decade of the 60’s, Danish returned to his roots-the cream and black #61 and he also acquired a partner and co-car owner, Sam Hill. Again in his own equipment, Steve Danish enjoyed an impressive comeback.

Danish won the 1962 Fonda point title and scored five wins from 1961-1963, including the 1963 Fonda 200, his final Fonda victory. His last career win came on October of 1963 in a 100-lapper at Victoria Speedway near Schenectady, New York. He remained competitive, albeit winless, thereafter but Danish was becoming increasingly disenchanted with the advances and costs of the sport.

Danish and partner Hill sold their racing equipment at the end of the ’66 season and Steve bought an airplane. “Racing took its toll,” he recalls. “My kids had started to grow up without me and that worried me a lot. But, I’m glad I had flying because I didn’t miss racing that much by having another interest.”

When Danish retired prior to the 1967 season, he wasn’t alone as sadly Danish, Jeep Herbert, and Jim Luke all moved to the sidelines. Overnight Fonda Speedway lost a trio of first-night pioneers-Hall of Famers all. It was a foreshadowing of a severe talent depletion that would trouble Fonda into the early 1970’s

For more information about Steve Danish and all of the other Fonda greats you can purchase the FONDA! book again as it has been reprinted and is available at www.Coastal181.com. It is a must have for all Fonda Speedway fans who want to read about the history of the Montgomery Fairgrounds track.

For more information about the Fonda Speedway you can go to their new and improved website www.newfondaspeedway.com