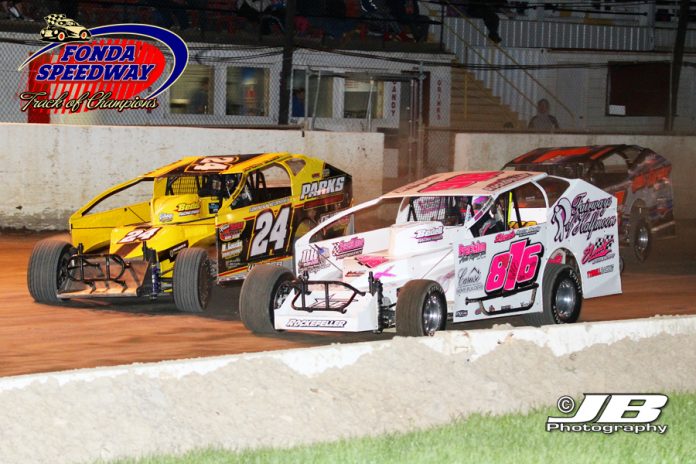 FONDA, NY – In the last points race of 2016 at the Fonda Speedway, after putting together a three win season, Jeremy Wilder saw himself in a three way battle for the modified point championship with Ronnie Johnson and Bobby Varin.

At the end of that last points race at Fonda, Johnson was declared the track champion but the one thing that Wilder had done during the 2016 season was open the eyes of people who may not have already known that he was a very good, young, race car driver.

Saturday evening at Fonda he proved that yet again as he bested the 2016 champion Johnson and the rest of the field in impressive fashion for his seventh career modified feature win at Fonda in the Parks Companies, Joe Wagner Plumbing & Heating, Adirondack Motorsports Teo car.

“It’s nice to get a win out of the way early,” Wilder told Toby LaGrange in victory lane after the win. “It was a good night as we hit on a couple of things and I have to thank car owners Bill & Ellen Schoons for everything that they do for me.”

Heat race wins for Jeff Rockefeller and Wilder placed them on the front row for a heads up start with Rockefeller getting the early lead at the drop of the green flag. But it was Wilder who led lap two with an inside pass on Rockefeller at the line to complete the lap. After swapping the third position for a couple of laps, fourth place starter Ronnie Johnson took it away from Rockefeller with Wilder out to a straightaway lead by lap six.

Wilder encountered lap traffic on lap 12 allowing Johnson to close in three laps later and at the halfway point the top five consisted of Wilder, Johnson, Rockefeller, opening day Ice Jam winner Justin Boehler, and ninth place starter Pep Corradi. The first of only two cautions in the event came out on lap 16 for Floyd Billington who had mechanical problems and stopped at the pit entrance in turn three after trying unsuccessfully to drive into the pit area.

On the restart, 11th place starter Matt DeLorenzo who tried for many laps to get by Darwin Greene in a great race back in the field, not only got by Greene but three other cars as well to get up to the sixth position. The final yellow of the event was out on lap 17 for Kenny Sparks who was in the front stretch wall closing up the field one last time. Sparks was not injured in the wreck but was done for the night at that point.

As Wilder again pulled away from Johnson on the restart, all eyes were on DeLorenzo who was passing cars at will on the outside of the speedway and moved past Rockefeller for the third position with six laps to go in the 30-lap event. Wilder took the checkered flag first to win the event followed by Johnson, DeLorenzo, Rockefeller, and Boehler.

“The draw tonight definitely helped with the upfront start in the heat and the feature,” Wilder said. “Pete (promoter Pete Demitraszek) and his crew did a great job on the track tonight.”

Another heads up start in the 25-lap sportsman feature saw heat race winners Dave Constantino, Rocky Warner, and Harry Shaffer start in the top three with Constantino taking the lead at the drop of the green flag. That was short-lived however as Warner took the lead away from Constantino as lap one was completed.

From that point on, Warner just kept stretching out his lead from a straightaway on lap five to a half track by lap 18. With there being no cautions to benefit from during the event Warner went on to the green to checkers win, the 19th of his career in the division which leads all drivers in the class, in the Jake Spraker owned #1J over Constantino, Cody Clark, Shaffer, and Ray Zemken.

“This is a tough sledding field here at Fonda and it as definitely good to start up front tonight,” Warner said in victory lane.

EJ McAuliffe led the first two laps of the rookie sportsman feature event until lap three when second place starter Mike Block took over the point on lap three. Block went on to lead the remaining laps for his second win in a row followed by McAuliffe and Cory White.
Opening night feature winner Kenny Gates and Josh Coonradt won pro stock heat events and started the 20-lap feature event on the front row with Gates taking the lead at the drop of the green flag. As Gates pulled away from the field there was a three way battle for third between Randy Cosselman, AJ Walters, and Ivan Joslin with Joslin getting the spot on lap three.

Wilson and Joslin swapped the third position numerous times throughout the event and definitely was the race to watch on track as Gates was in a league of his own and dominating the event. Coonradt’s night came to an end on lap 14 when he was involved in a wreck with another car on the backstretch and drove the car to the pit area and was done for the night.

Joslin and Wilson continued their battle throughout the event until with a couple of laps to go Wilson dropped back to sixth as eighth place starter Chuck Dumblewski, seventh place starter Frank Twing, and 14th place starter Shane Playford all got by him for spots in the top five. At the drop of the checkered flag it was Gates who collected his second win of the season and the 67th of his all-time win list leading career at Fonda followed by Joslin, Dumblewski, Twing, and Playford.

“This is fantastic I don’t really know what to say,” Gates said after piloting the Happy Returns, School House Pools, Palmer’s Service sponsored #35 to the victory. “The track was perfect for me tonight, a little dry, a little slick, but smooth. There were a lot of restarts tonight and I just had to continue to hit my marks.”

A caution before any laps were completed slowed the street stock feature when Steven Young and Cliff Haslun wrecked in turn two. Both were uninjured but were done for the night at that point. Johnny Young led early on the original restart of the 12-lap street stock feature event but it was all time win leader Dave Horning Sr. who was the leader at the completion of lap one. Horning led all of the remaining laps for his second win of the season and the 57th of his career in the division over Johnny Young, Steve Cosselman, Jim Groncki, Steven Young, and Haslun.

Next Saturday, May 6 the second month of the season begins with a tribute to Dick Schoonover as a regular show in all divisions is on the racing card starting at 7:00 p.m. For more information about the “Track of Champions” you can go to their new and improved website www.newfondaspeedway.com