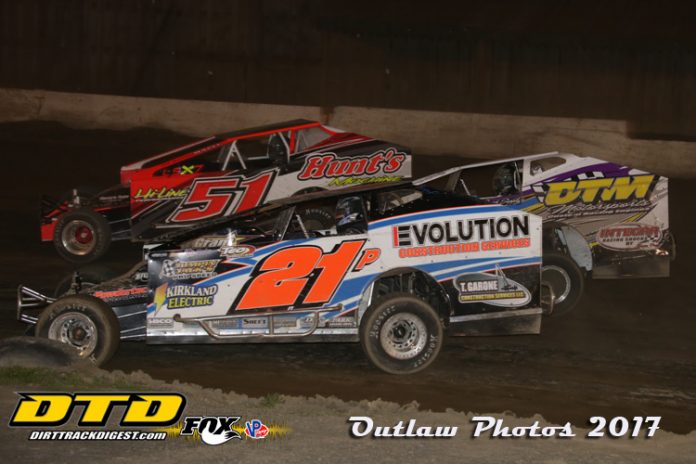 FONDA, NY – This Saturday, May 20 Demitraszek Enterprises looks to get their 2017 season back on track after two consecutive rainouts the last two weeks. Drivers and race fans will look forward to some great racing action on that night, as VP Small Engine Fuels will sponsor a regular night of racing in all divisions starting with the first heat race taking the green flag at 7:00 p.m.

There will also be a driver’s autograph session this Saturday, May 20 at the “Track of Champions” with details of the time that event will be held being posted on the www.newfondaspeedway.com website closer to the Saturday race date.

This Saturday will also be the held over tribute to two great drivers who called Fonda home at one point during their racing careers, those two drivers being Dick Schoonover and Rene Charland. Charland and Schoonover are both members of the Fonda Speedway Hall of Fame with inductions back in 1988 and 2016 respectively.


On Saturday August 6, 2016 the evening that Schoonover was inducted into the Fonda Speedway Hall of Fame, pro stock competitor Tom Denton honored Schoonover by re-numbering his pro stock to Schoonover’s number, which was 26A. Re-numbering the car as Denton did may have brought him some good luck as well as Denton won his first career feature event in the pro stock division at Fonda on that night.

The May 20 racing program leads us into the Memorial Day weekend event at Fonda on Saturday, May 27 which will be Military Appreciation Night with all Veterans or active duty military members being admitted to the track free of charge with ID or a DD214. The Patriot 360-Sprint Car Tour will be in action at Fonda that night as well, with Palmer’s Service Center sponsoring the evenings racing activities.

Please also don’t forget to come to the track a little early on any race night to visit the Fonda Speedway Museum where the history of the “Track of Champions” Fonda Speedway can be relived. David, Jackie, and Jessica Lape along with their staff have done a great job with the museum, which is truly special to anyone who has been a fan of stock car racing at the Montgomery County Fairgrounds facility.

For more information on anything related to the Fonda Speedway, please go to their new and improved website www.newfondaspeedway.com