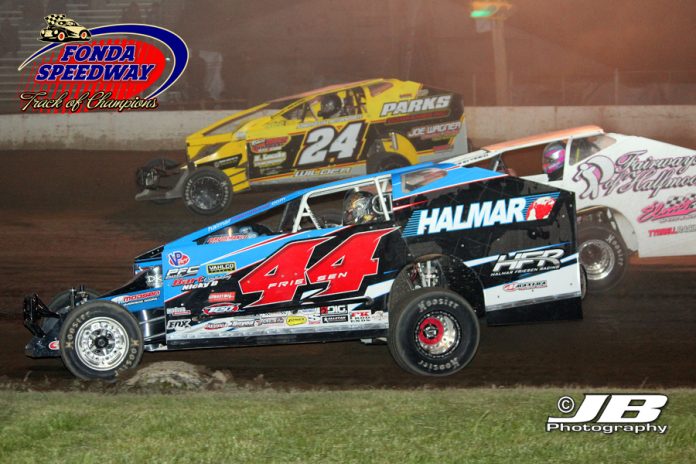 Fonda, NY – 24 hours after running a NASCAR Camping World Truck Series event down in Charlotte, Stewart Friesen was back home at Fonda battling it out for the modified feature win with defending track champion Ronnie Johnson.

After a see saw battle over the final laps of the event Friesen stood tall in Fonda’s victory lane as he took home his 42nd career win at the “Track of Champions”. The win puts Friesen just one win away from tying Bill Wimble for eighth on the all-time win list at the historic Montgomery County Fairgrounds track.


“That race with RJ was pretty damn cool,” Friesen told victory lane announcer Toby LaGrange in victory lane. “Lap traffic was pretty crazy but the track was great, it was wide and you could race anywhere on it.”

The evening began with the very popular Meet n’ Greet on the front straightaway with drivers bringing their cars out so that the fans could get an “up close” perspective of the race car and meet the drivers as well as get a photograph of their favorite drivers. After the Meet n’ Greet, Fonda Speedway promoter Pete Demitraszek’s daughter Michelle sang the National Anthem before the first heat race came on track to start the racing activities.

In the final week of the heads up start, Josh Hohenforst and Ronnie Johnson started the 30-lap modified feature on the front row with Johnson the early leader. Second and third row starters Jeremy Wilder and Stewart Friesen took turns getting by Hohenforst for the second and third positions on lap two with Johnson out to a quick straightaway advantage at that point.

When lap traffic slowed Johnson on lap nine, Wilder and Friesen were able to close in on the leader as the top three together on lap 11. A close call for the leader came on lap 14 when he and the lap car of Jeff Rockefeller made contact with each other on the front straightaway as Johnson was trying to lap Rockefeller. Both continued on without as issue.

At the halfway point, Friesen was able to get by Wilder for the second position and set his sights on Johnson as Wilder, Hohenforst, and Tim Fuller completed the top five. Friesen was right on the leader’s rear bumper by lap 18 and three laps later he swung around the outside of Johnson in turn four to take the lead. But the race was far from over at that point.

Lap 24 saw both Fuller and Danny Varin getting by Hohenforst into the top five while Friesen was negotiating lap traffic which at one point resulted in contact between him and the lap car of Kenny Sparks. The contact slowed Friesen enough that Johnson was able to retake the lead but it was Johnson who next had contact with Sparks resulting in him being slowed a couple of laps later.

With three laps to go, Friesen got by both Johnson and a lap car to take the lead for good as the top five raced under a blanket over the final lap. At the checkered flag it was Friesen taking the win in the Halmar #44 Teo Car over Johnson, Fuller, Danny Varin, and Hohenforst.

“What an awesome race,” Friesen said. “It is so cool to live so close to a track with the history that Fonda has. I really love it here and thank all the fans for supporting Fonda.”

By virtue of their heat race wins Cody Clark and Mark Mortensen started the 25-lap sportsman feature on the front row with Mortensen the early race leader at the drop of Joe Kriss’ green flag. On lap two, Clark and fourth place starter Aaron Burton were side by side for the second position with Burton getting the spot.

Fifth place starter Rocky Warner was on the move early as he also got by Clark at that point for the third position and on lap four Warner was the new second place car as he was able to get by Burton with Mortensen now out to a half straightaway advantage. The gap stayed the same between the leader and second place car until lap nine when the lap car of Kathy Bellen decided to go to the pit area and drove right in front of the race leader slowing down his momentum and allowing Warner to get by for the lead.

At the halfway point in the event the top five consisted of Warner, Mortensen, Burton, ninth place starter Chad Edwards, and Clark. The one and only caution of the event fell on lap 17 for Brian Calabrese and Wesley Sutliff who got together in turn four and on the restart Warner again pulled away in the lead.

When the checkered flag flew it was Warner taking his 20th career win in the division in the Glove City Transportation sponsored, Spraker Racing #1J over Mortensen, Edwards, Burton, and Clark.

“Jake’s (car owner Jake Spraker) got us a nice hot rod here,” Warner said in victory lane. “It’s still got a little more speed in her though as it isn’t quite perfect yet.”

Larry Niemiec led all 12 laps in the rookie sportsman feature to get what was to be his first career win at Fonda. That all changed in tech however as the top three finishers Niemiec, Wesley Sutliff, and William August were all disqualified for rev box infractions. After all tech was completed, fourth place finisher Kathy Bellen was declared the winner with Cory White second.

Kenny Gates led at the start of the 20-lap pro stock feature event after winning heat one and starting on the pole. Gates pulled away to a straightaway advantage by lap four while second and third place starters Ivan Joslin and Luke Horning battled side by side for the second spot. And further back Chuck Dumblewski, Jason Casey, and AJ Walters battled three wide at times for the fourth position.

Gates held a straightaway advantage over everyone for the entire distance of the feature for his third straight win of 2017 and the 68th of his career which leads the all-time win list at the track in the Happy Returns/Palmer’s Service #35. After battling race long for the second position, Joslin ended up second followed by Horning, Casey, and Walters in the top five.

“I can’t believe it,” Gates said in victory lane. “Heat races mean so much more in this heads up start format early in the season and I have been fortunate to be in the first heat race every week and starting out front. What a great start to the season.”

Outside pole starter Joey Wilson took the lead at the drop of the green flag in the 12-lap street stock feature event but at the completion of lap one it was two time winner Dave Horning Sr. who was in the lead. Ninth place starter Rob VanAernam worked his way methodically to the front and was on Horning’s rear bumper for the final lap. Coming out of turn four to the checkered flag, VanAernam was able to get by Horning to win the event by a nose for his 38th career win at the track. Horning, Wilson, Johnny Young, and Jim Groncki completed the top five in the event.

Next Saturday Fonda Speedway celebrates the Memorial Day Holiday with Military Appreciation Night. The racing card will consist of a regular show in all divisions along with the Patriot Sprint Tour on Palmer’s Service Night. All Veterans or active duty will receive free admission to the track with an ID or DD214. So come and celebrate the first holiday weekend of the year at the “Track of Champions” to see some great racing action in all divisions!