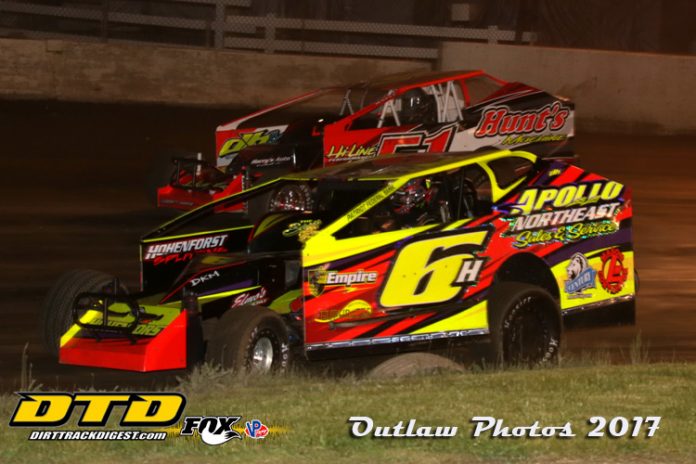 FONDA NY – Lap cars can either be a driver’s best friend or their worst enemy. Saturday evening at the “Track of Champions” Fonda Speedway they were Josh Hohenforst’s best friend as he used a power move in turns one and two to get by two lap cars and race leader Bobby Varin for the lead at the halfway point in the modified feature.

He led the event from that point on for his second career win at Fonda, his first one coming just short of three years ago. Not taking anything away from Hohenforst though as he had a fast enough race car that it probably wouldn’t have mattered if lap traffic didn’t come into play.

“It’s been a long road since our last win here,” Hohenforst said in victory lane. “It’s very hard to get a win here at Fonda and very special to be able to get one.”

A pit area full of race cars and a great crowd was on hand at Fonda on Saturday evening to help Demitraszek Enterprises celebrate the Memorial Day Holiday. A ceremony was held on victory lane during intermission with all veterans and active military in attendance invited over to victory lane to help celebrate the holiday.


Matt Demitraszek introduced a soldier who was in town for the weekend that he was deployed with in Afghanistan and the whole ceremony was very touching as those who fought for our country were honored at the track.

The first night of handicapping in 2017 saw Mike Maresca and Pep Corradi start on the front row for the 30-lap modified feature event with Maresca taking the lead at the drop of Joe Kriss’ green flag with third place starter Shaun Pangman second. Corradi moved into the second position on lap two with seventh place starter Bobby Varin third on lap seven after getting by Pangman.

Fifth and 10th place starters Hohenforst and Ronnie Johnson were next to get by Pangman for the fourth and fifth positions respectively on lap eight while Varin got by Corradi for the second position one lap later with Maresca in heavy lap traffic at that point allowing Varin to close in quickly. On the inside of the backstretch on lap 15, Varin made a pass for the lead with Hohenforst, Johnson, and 14th place starter Stewart Friesen now in the top five.

Hohenforst’s move for the lead came on lap 16 as he got around Maresca, Varin, and two lap cars for the lead in a sweeping three wide outside move in turns one and two. Despite heavy lap traffic over the final five laps of the event, the “Apollo Rocket” as Hohenforst is known to the Fonda fans never looked back as he went on for the win over Varin, Friesen, Johnson, and 11th place starter Tim Fuller.

“I am known for making last minute changes to the race car and during the pro stock feature I made a couple more changes to the car before our feature,” Hohenforst said. “I got held up a little at the start but saw a hole going into turn one for the lead, set the car, and went for it. We definitely earned this one.”

The caution plagued sportsman feature saw Adam McAuliffe lead at the start after starting on the outside pole with two early cautions on laps two and three slowing the field. Tony Farone was the new second place car on the restart with Nick Scavia third as those two put on a great race for the second spot.

On another restart, Scavia took over the second position and was quickly up to the leader in lap traffic. Cody Clark started the event in the fifth position and when the caution came out again for the final time on lap 11 for Farone and Brian Nelson who were in the wall in turn one Clark was in the second spot as he and Scavia put on a great race for the runner-up spot. Nelson was done for the night at that point while Farone continued on at the rear of the field.

At the hallway point, McAuliffe was still the leader followed by Scavia, Clark, 12th place starter Rocky Warner, and sixth place starter Brian Pessolano. Clark moved past Scavia again for the second position on lap 17 and three laps later went around the outside of McAuliffe at the line for the lead. Clark went on to his fourth career win in the North Hudson Woodcraft sponsored #4 over Scavia, Warner, McAuliffe, and Pessolano.

“I was running third there for a while but then I got hooked up on the outside and was able to get the win,” Clark told Toby LaGrange in victory lane.

Jim Normoyle led the pro stock feature event at the start with seventh place starter Chuck Dumblewski moving quickly to the front once the green flag flew. Dumblewski was the new second place car on lap five after getting by Justin Knight for the spot and after a one lap side by side battle with Normoyle, Dumblewski was the new race leader on lap eight.

Normoyle wasn’t letting Dumblewski get away and on the outside of turns three and four on lap 10 he retook the lead from Dumblewski with the top five at the halfway point consisting of Normoyle, Dumblewski, 12th place starter Kenny Gates, AJ Walters, and 11th place starter Luke Horning.

After the final caution flew on lap 12 it was still anyone’s race as the top four were nose to tail for the top spot. On lap 14, Gates made a three wide move to get around Dumblewski, Horning, and Normoyle to take the lead and from that point on he stretched out his advantage in the closing laps to take his fourth win in a row in 2017 and the 69th of his career at Fonda over Horning, Dumblewski, Normoyle, and Walters.

“I knew things would come a lot tougher tonight starting in the back,” Gates said in victory lane. “Just an incredible car and the track was a little slick just like I like it.”

Cliff Haslun started the 12-lap street stock feature on the pole and took the lead at the drop of the green flag. He held the lead through two restarts after cautions but when the final caution came out on lap 10 things started to get out of hand with the race director ordering the checkered flag to fly one lap short of the 12 lap distance on lap 11. Haslun who has had nothing but bad luck in 2017 earned his second career win at Fonda over Johnny Young, Bubby Shaffer, Jim Groncki, and Harold Chadderdon.

The 25-lap Patriot Sprint A-Main began with Josh Pieniazek the early leader but on lap four, in lap traffic, Pieniazek spun to avoid a lap car who was out of shape in turn three and backed into the tire wall bringing out the caution. Jared Zimbardi inherited the lead at that point and led the remaining laps for his first career 360 sprint win at Fonda and his third on the Patriot Sprint Tour in 2017 over Steve Poirier, Danny Varin, Cory Sparks, and Bobby Varin. For a full press release on the Patriot Sprint car event at Fonda please go to their website www.patriotsprinttour.com

The first Saturday in June will feature Amsterdam Printing & Litho Night at Fonda with Twin 20’s for the pro stocks on the racing card along with all other divisions starting at 7:00 p.m.