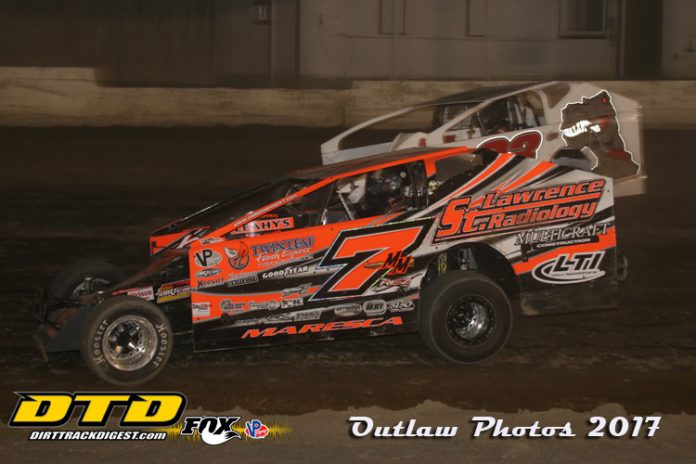 There will also be one “Wildcard” award handed out to one lucky driver who is chosen overall and that driver will receive $50, a NYSSCA Yearbook, and a NYSSCA hat. If you are not yet a member of NYSSCA, you can see track representative Bonnie Mortensen before the racing program begins so that you are eligible to receive the awards on Saturday nights. The membership fee is $25.

The New York State Stock Car Association is a group of area racers dedicated to the betterment of the sport through education and continued support. NYSSCA and its predecessor, the New York State Stock Car Owners and Drivers Club were originally created as “sounding boards” for area racers to voice opinions and to effect change at local speedways. Early 1960’s meetings concerned raising track purses and changing track rules. When NYSSCA was incorporated in 1969, the officers and board members expressed concerns over track safety and insurance matters.

One of NYSSCA’s first projects was to establish a benefit fund to help members who were injured in race related accidents. The fund has easily become one of the most important functions of the organization.

NYSSCA is also highly regarded for its awards banquet. The awards banquet was started in 1964, with some huge, well-remembered events taking place at the Schenectady IUE 301 Union Hall in the early 1970’s. Recent banquets at the Albany Polish Community Center have been just as large as membership climbs to all-time records.

Educating the general public on racing’s place in the community is also a prime concern of our association. With the changing times bringing more emphasis on pollution, noise control and safety, it is vital that racers band together for the common cause of protecting the sport at existing tracks and helping, whenever possible, to provide a positive picture of racing on the local level.

With such an energetic slate of activities ahead, the New York State Stock Car Association needs your support to ensure that all of its programs reach a successful outcome. It is vital that racers join together for one common goal, the preservation of auto racing. Please join us today!!

BENEFITS OF A NYSSCA MEMBERSHIP
(Note – Membership is open to ANYONE – all drivers, owners, fans, press, sponsors, and other members of the racing fraternity as approved by the NYSSCA Board of Directors!)

NYSSCA Members Benefit Fund – Established in 1975, the Benefit Fund is the most important activity of the association. The fund provides cash benefits for members injured during sanctioned racing events at recognized racing facilities.

NYSSCA Yearbook – Published annually, the yearbook contains a record of all NYSSCA functions from the previous season. Proceeds from the book help to supplement the benefit fund.

NYSSCA Awards Banquet – Held annually in January at the Polish Community Center in Albany, the NYSSCA Banquet recognizes the accomplishments of drivers, members, and associates at all the participating NYSSCA member tracks.

NYSSCA Hall of Fame – In an effort to preserve the rich racing history in New York State, the Hall of Fame honors not only drivers, but also owners, officials, and others dedicated to the sport of auto racing. A new display with over 100 names can be seen and even more memories relived at the Saratoga Automobile Museum in the Saratoga Spa State Park. The yearly Hall of Fame inductees are announced at the Awards Banquet.

To strive to improve auto racing.

To implement and maintain a benefit fund to provide supplemental income for members injured while involved in auto racing within our organization.

To provide a forum for discussion and resolution of racing related matters within the organization.

To provide an avenue for social functions.

To provide an educational program for members through informational seminars, newsletters, etc.

To promote the sport of auto racing.