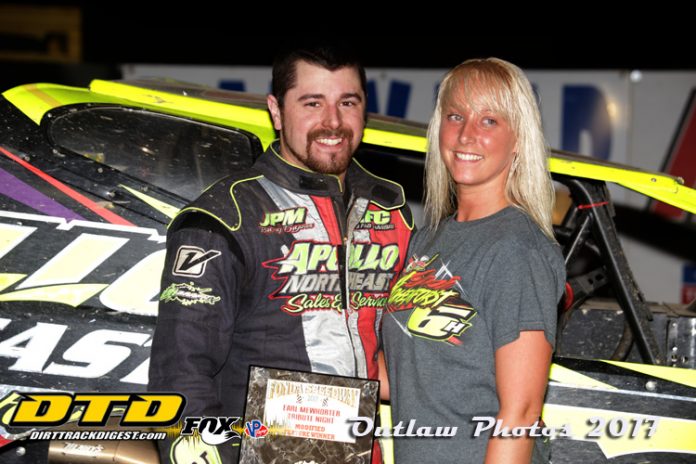 FONDA, NY – Every race car drivers dream is to win a feature at the “Track of Champions” Fonda Speedway at least once, in any division, during their racing careers. That dream was realized by sportsman driver “Happy” Harry Shaffer on Saturday evening at Fonda when he held off Chad Edwards for his first career win at the Montgomery County Fairgrounds track in the Sampson Motor Car #1H Teo car.

“This means everything to me,” a very emotional Shaffer told Toby LaGrange in victory lane. “I have to thank everyone from my family, to my crew, and all of my sponsors for putting up with me for the last 30 years.”

The modified feature saw Stewart Friesen cross the finish line first under the checkered flag but in post-race tech the car was found to be 10 pounds light at the scales disqualifying him from the victory. The second place finisher Josh Hohenforst was declared the winner as the first two time winner in the division during the 2017 racing season.

Troy Palmer and Justin Boehler started the 30-lap modified feature on the front row with Boehler the early race leader. The first of four caution flags during the event fell on lap three for Tony Pepicelli who laid down a stream of liquid around the track and slowed going into turn one. Boehler who was the leader of the event at the time actually got into the liquid on track and slid real high in turn one just before the caution flag flew.

The yellow was out again on lap 10 for Bobby Varin who was facing the wrong way in turn four but spun his car in the right direction and continued on at the rear of the field. Friesen was the new second place car on the restart with 12th place starter Danny Varin now third and eighth place starter Josh Hohenforst fourth.
After a side by side battle with Maresca for the race lead, Friesen was the new leader as the lap counter clicked off lap 14 after securing the position with a pass on the inside of turn two. Bobby Varin brought out the caution again at the halfway point in the event after slowing in turn one with Friesen, Maresca, Danny Varin, Hohenforst, and Ronnie Johnson the top five at that point in the event.

Danny Varin and Hohenforst both got by Maresca for the second and third positions on the restart with Friesen out to a straightaway advantage with 10 laps to go. The final yellow of the event came out on lap 24 for Jimmy Davis who was in the backstretch wall.

Davis slowed in turn two and went high in the turn looking as though he may be heading for the pit entrance in turn three. When Davis came up the track, Friesen was almost alongside of him and the two made contact resulting in Friesen sustaining a flat left front tire. Friesen would continue on with the flat tire as the green flag flew again.

Hohenforst took over the second position and chased Friesen across the finish line as the left front flat didn’t hinder the Halmar #44 at all during the final laps. Hohenforst, Danny Varin, Tim Fuller, and Maresca completed the top five but in post-race inspection the cars of both Friesen and Fuller were disqualified for not making weight placing with Johnson and Jeremy Wilder in the top five.

With the disqualification of Friesen, Hohenforst was declared the race winner for the second time this season and the third time in his career at Fonda in the Apollo Northeast #6H.

The sportsman feature began with Doug Hancock and Harry Shaffer on the front row with Shaffer taking the lead at the drop of Joe Kriss’ green flag. The first of only two caution flags in the event fell on lap four for Aaron Burton who suffered a flat left rear tire. He pitted and continued on at the rear of the field.

Sixth place starter Dave Constantino was the new second place car on lap five with Rocky Warner the new fifth place car after starting 12th. Constantino was on the outside of Shaffer for the lead on lap eight and made contact with the front stretch wall but kept going as Shaffer held the lead at that point. Constantino made the same move on the next lap but stayed out of the wall this time and took over the race lead.

Constantino, Shaffer, Brian Pessolano, 10th place starter Chad Edwards, and Warner were the top five at the halfway point of the 25-lap event with another caution out on lap 20, this time for the leading car of Constantino who broke in turn four. Shaffer took over the lead at that point and led the remaining laps for his first ever win at Fonda over Edwards, Pessolano, seventh pace starter Tim Hartman Jr., and Ray Zemken.

Cory White led the first nine laps of the 12-lap limited sportsman feature event until William August took over the point on lap 10. August led the remaining two laps of the event for his first career win at Fonda over Wesley Sutliff, Larry Niemiec, Kathy Bellen, and White.
Randy Cosselman led at the start of the 20-lap pro stock feature after starting on the inside pole with Josh Coonradt in tow. Ivan Joslin was the new second place car on lap two but was forced from the event on lap six while running in that position with mechanical problems. Kenny Gates started the event in the 10th position and by lap seven he was already up to the fourth spot.

Two laps later on lap nine, Gates was the new third place car after getting by Frank Twing with the top five at the halfway point consisting of Cosselman, Coonradt, Gates, Twing, and Jim Normoyle. The top three were nose to tail in lap traffic by lap 12 as they raced for position with Gates able to get around Coonradt for the second spot after using a lap car as a pick.

With three laps to go in the event, Gates made a move around the outside of Cosselman in turn four to take over the lead with the caution flag out on the next lap for Twing who was hit by the spinning car of Cosselman in between turns one and two. Cosselman did a 360 degree spin and kept going before the caution came out so he was able to hold on to his third place position on the restart but Twing was done for the night at that point.

Gates pulled away on the restart to his fifth win of the season and the 70th of his career in the division over Coonradt, AJ Walters, Cosselman, and Chuck Dumblewski.

“It’s been a tough week after being involved in a wreck last week here at Fonda,” Gates said in victory lane. “I have to thank my crew who really stepped up this week to get the car back right where it was before the wreck.”

Steven Young led the first lap of the 12-lap street stock feature until Dave Horning Sr. took over the lead on lap two after starting fourth. Horning brought out the caution on lap three as he was in the backstretch wall with Young retaking the lead for the restart. Eighth place starter Rob VanAernam was the next to lead after getting around Young on lap six but Young held tough and retook the lead from VanAernam with only two laps to go.

Going in to turns one and two for the final lap VanAernam was on the outside of Young trying to make the pass for the lead and the win but contact was made resulting in the two cars sliding high in the turns allowing third place runner Cliff Haslun to take over the lead. Haslun led the remaining laps for his second win of the 2017 season over Johnny Young who also got under Steven Young and VanAernam when they drifted high, Steven Young, VanAernam, and Chase Aussicker.

Kerrie Hollenback led the first five laps of the 12-lap cruiser feature until Chris Andrew got by for the lead on the outside of turn four. Andrew went on to his first career win at Fonda over Dale VanAllen, Kerrie Hollenback, TJ Marlitt, and Ken Hollenback.

Next Saturday, June 17 will be Parillo Services Night at Fonda with all divisions in action for a regular racing program saluting all fathers on Father’s Day weekend. Starting time will be 7:00 p.m.