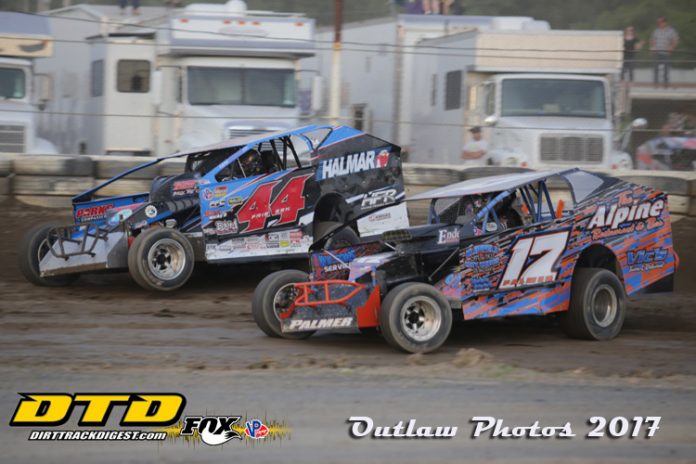 FONDA, NY – On Saturday, June 17 at the “Track of Champions” Fonda Speedway, another action packed racing card is on the schedule on Parillo Services Night. All divisions will be in action including the cruisers, which were added to the racing program that is set to begin at 7:00 p.m.

Also added to the racing program will be the ever popular Drivers Meet N’ Greet which will take place on the front straightaway after warm-ups are completed. Fans will be allowed to come out on the front stretch to meet and greet their favorite drivers and get their pictures taken with them, get autographs signed by them, and pick up pictures of all of their favorite drivers.

Earlier this week on Tuesday, Fonda Speedway promoter Pete Demitraszek put out a note on the New Fonda Speedway website and Facebook page regarding the modified feature that was run back on Saturday, June 10 regarding an issue with the track scales in the pit area. The note read as follows:

Tuesday June 13, 2017
On Saturday night June 10, 2017, we at Fonda Speedway had a malfunction of our track scale. The scale seem to have operated correctly early in the evening but started to malfunction as the night went on. We have come to learn the scale was run over and vandalized on Friday night by people attending another function on the Fair Grounds. We feel it in the best interest to everyone to award both Stewart Friesen and Tim Fuller the full point value of their respected finishing positions. Stewart will also be credited with a win along with Josh Hohenforst. While track scale weight is always the norm, we feel due to the weight changes we should have noticed the issue sooner. We hope to have the scale repaired later today and it should be ready for this week’s racing action.
Pete D.

That said Friesen now moves into a tie for eighth place on the Fonda Speedway All Time Win List with Bill Wimble, both having 43 victories. For Hohenforst it was his third career win at the “Track of Champions” and second of the 2017 season for both drivers.

An update from David, Jackie, and Jessica Lape regarding the Fonda Speedway Museum stated that they have copies of the book FONDA! on sale at the museum for $25. The book is a must read for all who have ever attended racing events at Fonda and the rich history of the track known as the “Track of Champions”.

Some of the displays in the museum include Ray Sitterly’s old coupe, David’s (Lape) last Champ Car, and Lou Lazzaro’s car. There is another new display in the works as well, Louie’s (Lazzaro’s) roof that had the extra opening so he could get in and out easier!

There is also a weekly drawing at the museum for a free admission to the Fonda Speedway, a free ice cream at the Dairy Bar, and other assorted prizes as well so please stop in to check out the museum for a chance to win those weekly prizes!