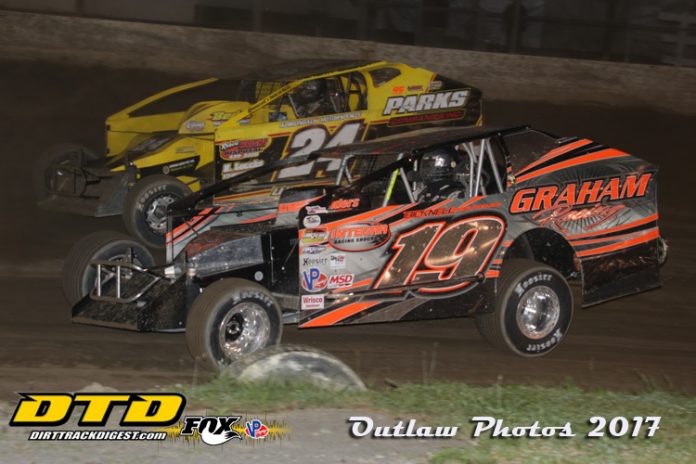 FONDA, NY – At the beginning of the 2017 racing season many people were surprised that Tim Fuller had decided to make Fonda Speedway his home track on Saturday nights. It was a win, win for Fuller who would gain DIRTcar points for racing there and for the Fonda fans as well to have a driver of his caliber racing there every Saturday evening in addition to all of the other great drivers who call the “Track of Champions” home.

Perhaps the only drawback for Fuller was the distance that he had to travel to get to Fonda from his home town of Watertown, NY but that long distance tow paid big dividends on Saturday evening as he was the winner at Fonda for the first time in his career in the Graham Racing #19.

“I’ve been coming here to Fonda for 20 years but only once or twice a year until this year when we decided to make it our home track for the 2017 season,” Fuller told Toby LaGrange in victory lane. “The track was real heavy tonight and I decided to make some changes just before the feature so I really have to thank Ray Graham and my crew.”

Troy Palmer led at the drop of Joe Kriss’ green flag from his outside front row start with fourth place starter Mike Maresca in the second spot. An early yellow on lap three slowed the field when Darwin Greene ended up in the tire wall in turn three. He was uninjured but was done for the evening at that point.

Palmer held the lead on the restart with a new second place car in opening day winner Justin Boehler now in that position. Palmer and Boehler were side by side for the lead on lap four with Palmer able to hang on to the lead at that point but on the next lap, lap five, Boehler used an outside move in turns three and four to get by Palmer for the lead.

The final yellow flag in the event fell on lap seven when Craig Hanson spun in turn four and on that restart seventh place starter Tim Fuller was the new second place car with ninth place starter and defending track champion Ronnie Johnson third and 10th place starter and last week’s winner Stewart Friesen fourth after they all got by Palmer for position.

Fuller got a great run coming out of turn two on lap 14 and got to the inside of Boehler to make the pass for the lead on the back stretch. Three laps later Fuller was in lap traffic which he would have to deal with for the remaining laps in the event while Friesen continued to move towards the front taking the third spot away from Johnson on lap 19 and then the second position away from Boehler on lap 25 of the 30-lap event.

Despite having to deal with lap traffic for the remaining laps, Fuller stretched out his advantage to a straightaway by the time the checkered flag flew. Friesen, Johnson, Boehler, and 12th place starter and last week’s winner Josh Hohenforst completed the top five in the event.

“Don’t screw this up,” is what Fuller told Toby Lagrange on checkerboard square when asked what he was thinking after he took the lead in the event on lap 14.
Doug Hancock and Josh DeMagistris started the 25-lap sportsman feature on the front row with DeMagistris taking the early lead at the drop of the green flag followed by David Manchester. Dave Constantino started the event in the fifth position and on lap three was the new second place car after getting by Manchester for the position.

Eighth place starter Nick Scavia moved into the third position on lap three after getting by Manchester with Constantino pressuring the leader by lap six. On the inside of turn one on lap seven, Constantino got alongside of DeMagistris and took over the lead on the inside of turn one. Taking turns at getting by DeMagistris were both Scavia and ninth place starter Chad Edwards who were the new second and third place cars with five laps to go.

Constantino held a straightaway advantage on lap 22 but that went away on lap 23 when the caution flag flew for DeMagistris who spun on to the infield of the backstretch. On the restart the yellow flew again this time for pole position starter Hancock, Anthony Cardamone, and Brian Nelson who got together on the front stretch.

On the restart, Edwards was the new second place car with 11th place starter Rocky Warner in third but despite pressure to the checkered flag Constantino held on for his 15th career win in the division in the West End Towing Cyclone chassis over Edwards, Warner, Scavia, and sixth place starter Tim Hartman Jr.

Larry Niemiec led all 12 laps in the limited sportsman feature event after starting on the outside pole for his first career win at Fonda over William August, EJ McAuliffe, Mike Block, and John Lindblade.

On lap 10 on the outside of turns three and four, Coonradt got around Ivan Joslin for the lead with 11th place starter Kenny Gates the new fourth place car behind Coonradt, Ivan Joslin, and AJ Walters. Gates got by Walters for the third position just before Coonradt started to show signs of smoke and was forced to the pit area with Ivan Joslin taking over the lead again.

When Coonradt was forced to the pit area it handed Gates the second position making it a two car race for the win between Ivan Joslin and Gates. When Ivan Joslin slid up high in turns three and four on the final lap, Gates was able to get underneath the leader as the two cars raced side by side to the checkered flag.

When the checkered flag flew it was Ivan Joslin hanging on for the win by 0.096 secs over Gates, Walters, 12th place starter Nick Stone, and ninth place starter Gus Hollner. In victory lane, an emotional Ivan Joslin dedicated the win to his father who he lost earlier this year saying “this one is for my dad”. What a way to celebrate Father’s Day weekend for Ivan and his family after his seventh win in the division.

Steven Young led the first three laps in the 12-lap street stock feature before Johnny Young took over the point on lap four. Johnny Young led to the final lap when Steve Cosselman was able to get to the outside of him in turns three and four to take the lead away and go on for his fifth career win in the division over Johnny Young, Cliff Haslun, Bubby Shaffer, and Jim Groncki.
Ken Hollenback led all 12-laps in the cruiser feature for his 38th career win in the division over Chris Andrew, Dale VanAllen, Kerrie Hollenback, and Daniel Haslun.

On Saturday, June 24 it will be Bill Anagnostopulos Night at Fonda with a special Elimination Race to be held in his honor. The 3rd annual event will be for the top five in modified points and one other driver from the top 6-10 positions in points who will also compete in the elimination race featuring a huge payout for only a few laps of racing. Last year Ronnie Johnson swept the event and took home over $2,000 for only 10 laps of racing!

Starting time on Saturday, June 24 will be 7:00 p.m. and don’t forget to visit the Fonda Speedway Museum before the racing activities begin. The museum opens at 3:00 p.m. every Saturday afternoon and looks back at the history of the “Track of Champions”. For more information about the Fonda Speedway you can go to their website www.newfondaspeedway.com