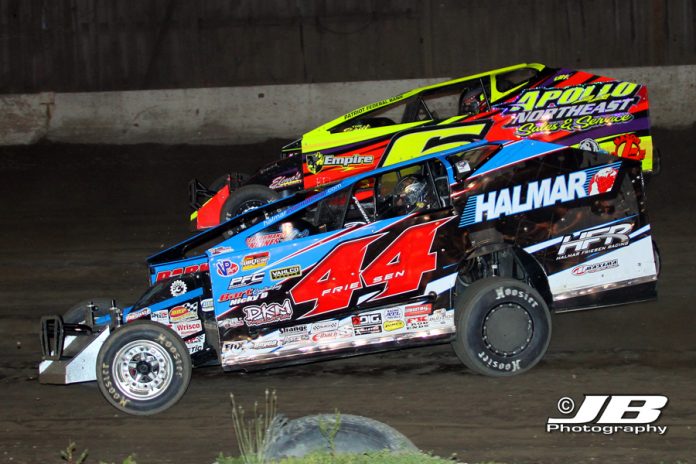 FONDA, NY – Saturday evening at the “Track of Champions” was a special night as the 3rd Annual Elimination Race in Honor of Bill Ag of the Winners Circle” was held. When all was said and done in that event, defending modified track champion Ronnie Johnson was the winner of the final elimination race which was worth $1475.

The prior four elimination races were won by Tim Fuller who took home a total of $2212.12 for his four wins in the previous events leading up to the final where he was defeated by Johnson. In victory lane following the event Fuller had the quote of the day saying jokingly: “If Jack (Johnson) wasn’t his (Ronnie Johnson’s) father I would have punted him.”

So what does all this mean as far as Stewart Friesen is concerned? Friesen was involved in the first elimination race where he was defeated by Fuller, but Friesen was able to use those two laps as a warm-up session to make adjustments to his “Cyclone” chassis before the feature event that was to follow. The changes worked for Friesen as he was able to go on to his 44th career modified win at Fonda which matches his car number, the Halmar #44.

“We’ve been trying to get to victory lane with this “Cyclone” chassis and tonight it was a great team effort in order for us to do that,” Friesen said. “We made some changes to the car after the Bill Ag Dash and it feels good to have the only “Cyclone” chassis in the modified field here at Fonda.”

The 30-lap modified feature began with Cody Bleau the early race leader after starting on the pole in the Laudy Hoyenga owned #34 as he was subbing for Shaun Pangman in the car. Bleau was out to a straightaway advantage when the first of many yellows in the event came out on lap two for Bobby Varin who came to a stop on the backstretch. Varin continued on at the rear of the field.

Another yellow flag flew on the restart when four cars were involved in a wreck on the backstretch including last week’s winner Tim Fuller and Jeremy Wilder. Both were able to restart the event at the rear of the field. On this restart Friesen who started the event in the 12th position was the new fourth place car and one lap later was third after getting by Mike Maresca for the spot.

On a lap six restart after another caution, Friesen was the new race leader with eighth place starter Ronnie Johnson now second and 10th place starter Bobby Varin third after both got by Bleau for position. Friesen was a halftrack ahead of the top five drivers at the halfway point in the event which included Johnson, Varin, Maresca, and Bleau.

Two more yellow flags flew one lap past the halfway point and after that race director Denny Tilison had seen enough and ordered a single file restart from that point on. Ninth place starter Josh Hohenforst and Fuller were able to get by Maresca for position in the final laps but Friesen was able to pull away for the win over Johnson, Varin, Hohenforst, and Fuller at the checkered flag.

The 25-lap sportsman feature was also caution plagued with the yellow flying before any laps were completed and again on lap two for Brian Pessolano who was in the turn three tire wall. Through the first two cautions it was Aaron Burton who started on the outside pole after his heat race victory who was able to maintain the lead.

Fifth place starter Nick Scavia was the new second place car on lap three after getting by Cody Clark for the position with the yellow out again at that point for Tony Farone who slowed on the front stretch. A single file restart was again ordered by the race director which seemed to be the answer as the race went clean and green the rest of the way.

For Burton it was the first win of his career in the division in the Caruso’s Auto Repair sponsored #26A.

“This has been a long time coming, I think,” Burton told Toby LaGrange in victory lane. “I’ve been to victory lane here many time with my dad (Jim Burton) and I have to thank everyone who has been behind me and has helped me get here. That was the longest race of my life, it was scary because it felt like I was being chased by a pack of wolves with all of the other great drivers behind me.”

Jim Normoyle led at the start of the 20-lap pro stock feature with Jason Morrison in tow after they started on the front row together. Sixth place starter Chuck Dumblewski was the new third place car on lap two and one lap later got by Morrison for the second position.

Three consecutive yellows slowed the field on laps three and four with the next restart being a single file version with Normoyle able to hang on to the lead at the drop of the green flag. Normoyle and Dumblewski were side by side for the lead on laps eight and 10 and on lap 11 Dumblewski made his move to the lead on the inside of Normoyle on the backstretch.

Casey closed in on the leader on the final lap but Dumblewski hung on for the win, the 11th of his career in the division at Fonda over Casey, Horning, Randy Cosselman, and ninth place starter Kenny Gates.

The street stock feature was changed to 15-laps due to the better car count this week with Harold Chadderdon leading lap one before Johnny Young took over after Chadderdon was involved in a wreck. Chase Aussicker took over the lead on lap three and led to the final lap when Steve Cosselman got by for the lead and his sixth career win in the division over Cliff Haslun, Rob VanAernam, Jim Groncki, and Young.

Top five finishers in the event Aussicker and Joey Wilson were both disqualified in post-race inspection for grinding their tires.

Kathy Bellen led all 12 laps in the limited sportsman feature for her second win of the season and the second of her career. She was pressured by William August to the checkered flag but held on for the win over August, Larry Niemiec, Mike Jackson, and Cory White.

Kerrie Hollenback inherited the lead on the final lap of the 12-lap cruiser feature when his brother Ken Hollenback ended up in the turn one wall with front end damage and went on to his 17th career win in the division over Pat McSpirit, Wayne Russel, and high school graduate Daniel Haslun.

Next Saturday, July 1 a special racing program will be sponsored by Benjamin Moore Paints featuring the 12th Annual Hondo Classic for the pro stocks in memory of the late Hondo Carpenter. The CRSA Sprint cars are also on the racing card along with all regular divisions with a starting time of 7:00 p.m.