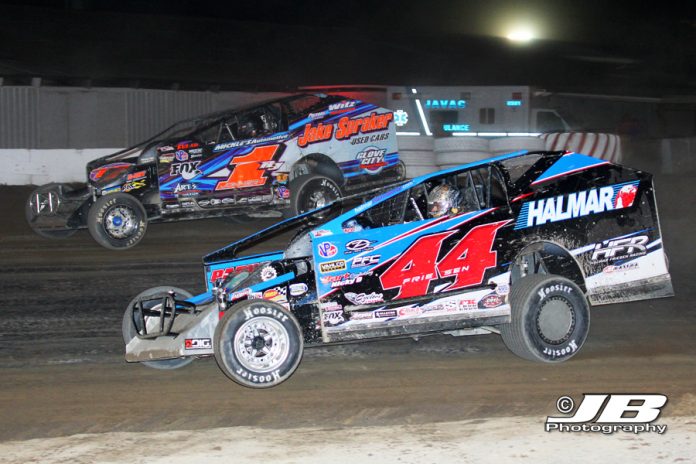 FONDA, NY – Stewart Friesen made his fourth win of the season look easy, coming from the 11th starting position to the lead on lap 10 of the 30-lap modified feature event. He led the remaining laps for his fourth win of the season in the Halmar #44 Cyclone Chassis DKM car and the 45th of his career at the “Track of Champions” putting him only three wins behind Mike Romano for seventh on the all-time win list.

“What a great race team this Halmar team is,” Friesen said in victory lane. “The track was nice and smooth up on the top and my crew chief Eric (Mack) has been working on this Cyclone car, trying different shocks, and we have got it pretty close now.”


Pep Corradi led at the start of the 30-lap modified feature event from his pole position start with Jeremy Wilder in second place after starting fourth. After starting the event in the 11th position, Stewart Friesen was already up to the sixth spot after getting by Ronnie Johnson and two laps later was the new third place car after getting by Mike Maresca for the spot.

Corradi and Wilder had a half straightaway advantage on Friesen at that point but Friesen like he has so many times before took little time to close in on the top two. On lap 10, Friesen went to the outside of both Wilder and Corradi to take the lead and quickly pulled away from the rest of the field. Wilder got by Corradi for the second position on lap 13 and at the halfway point of the event the top five consisted of Friesen, Wilder, Corradi, Maresca, and 10th place starter and last week’s winner Bobby Varin.

Varin continued his march to the front over the next few laps, taking the third position away from Corradi on lap 21 with points leader Tim Fuller following Varin through the field after starting back in the 13th spot as he was now fourth. Varin and Fuller each passed one more car for the second and third positions respectively but that would be as far as they would go as Friesen won the event by close to a half track.

Friesen was the winner followed in the top five at the checkered flag by Varin, Fuller, eighth place starter Josh Hohenforst, and Wilder.

14 year old Griffen Mansmith and Tony Farone started the 25-lap sportsman feature on the front row with Farone taking the early lead. Sixth place starter Cody Clark was the new second place car on lap two with ninth place starter Mark Mortensen up into the top five by lap five. By lap eight the top three cars of Farone, Clark, and seventh place starter Tim Hartman Jr. were a good distance ahead of the fourth and fifth place cars of Mansmith and Mortensen.

Mortensen got by Mansmith for the fourth position on lap 13 but on the next lap was forced out of the event with mechanical issues. Farone was in lap traffic with three laps to go but it didn’t slow his progress to the checkered flag as he went on to his fifth career win in the division over Clark, Hartman Jr., 11th place starter Aaron Burton, and Kurtis Hohensheldt. Mansmith’s great run came to an end on the final lap as his motor gave way while he was running in the top five.

“I couldn’t tell if we were going to get here to victory lane again the way we’ve been running,” Farone said after Toby LaGrange welcomed him to victory lane. “The track came up good and it was our night tonight.”

Cassidy Wilson led early on at the start of the 20-lap pro stock feature event but by the time lap one was completed it was outside pole starter Josh Coonradt who led the event. After starting the event in the sixth position, Kenny Gates was the new second place car on lap three after getting by Wilson and soon afterwards Gates was pressuring Coonradt for the lead.

At the halfway point of the 20-lap event, Coonradt still lead with Gates close behind followed in the top five by Wilson, eighth place starter Nick Stone, and 10th place starter and last week’s feature winner Chuck Dumblewski. Gates and Stone swapped the second position many times but with five laps to go Gates was in the second spot and putting heavy pressure on Coonradt for the lead.

On the inside of the backstretch on lap 17, Gates made the pass for the lead and went on to his sixth win of the 2017 racing season and the 71st of his career at Fonda in the School House Pools sponsored #35. Coonradt was second followed by Stone, 12th place starter Jason Casey, and 11th place starter Luke Horning.

“That was one heck of a race,” Gates said in victory lane. “I missed a couple of shifts during the event but other than that it’s been a great night. Josh (Coonradt) and Nick (Stone) ran a great clean race and I appreciate that.”

William August led all 12-laps of the limited sportsman feature as he went on to his second win of the season over Cory White, Mike Jackson, Kathy Bellen, and Bill Port.

Steven Young led at the drop of the green flag in the 15-lap street stock feature with Joey Wilson and Rob VanAernam second and third on lap three after starting ninth and 1th respectively. On lap 12 on the inside of the backstretch, Wilson made his move by Young for the lead and went on to his first win of the season and the second of his career in the division over VanAernam, Cliff Haslun, Bubby Shaffer, and Jim Groncki.

Ken Hollenback led all 10-laps of the cruiser feature to take his third win of the season and the 40th of his career at Fonda over Wayne Russel, Pat McSpirit, Kerrie Hollenback, and Zach McSpirit. In victory lane an emotional Hollenback dedicated the win to his mother who passed away earlier in the week,

The 25-lap URC 360-sprint car feature began with URC regular Curt Michael the early leader. Local favorite Cory Sparks started the event in the third position, fell back early, but by lap eight was back in the third position after getting by Bobby Varin for the spot. On lap 11, Sparks was the new second place car after getting by Matt tanner for the position with Michael a half straightaway ahead.

On lap 13, Sparks cut into Michael’s lead by a full second and on lap 14 on the backstretch Sparks went around the outside of Michael for the race lead. Sparks led the remaining laps in the Adirondack Harley Davidson #1HD for his first win at Fonda under the URC sanction and was followed in the top five by Michael, Danny Varin, Tanner, and Bobby Varin.

Sparks is also a two time winner at Fonda in the CRSA 305 sprint car.

“The first sprint car race of my career was a URC event here at Fonda in 2005,” Sparks said in victory lane. “But this is my first win of my career with URC.”

Saturday, July 22 will be a busy night at the “Track of Champions” with a regular racing card sponsored by West End Towing and Benjamin Moore Paints starting at 7:00 p.m. It will also be Irv Taylor tribute night at Fonda as the former great competitor will be honored by the track and the Fonda Museum.

Also at the Fonda Museum will be a Meet N’ Greet with Jimmy Davis and the Sanganetti #34 race car along with Mark Mortensen and his Benjamin Moore sponsored #1M race car on Benjamin Moore Night at the track. So please stop in to the museum to look around at the history of the “Track of Champions” and see these two race cars and their two great drivers!

For more information during the week about the Fonda Speedway you can go to their website www.newfondaspeedway.com