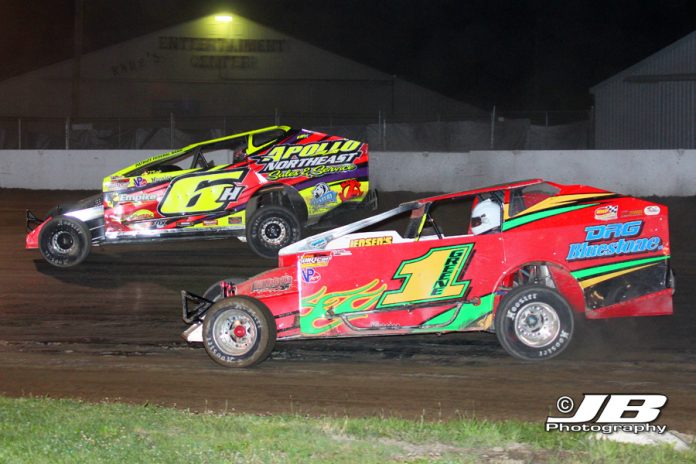 Fonda, NY – Saturday, July 22 will be a very busy evening at the “Track of Champions” Fonda Speedway as West End Towing and Benjamin Moore Paints will present a regular racing program in all divisions with a 7:00 p.m. starting time. It will also be Irv Taylor Tribute Night at the Speedway, as he will be honored by both the speedway and the Fonda Speedway Museum on Saturday.

But that’s not all folks! At the museum there will also be a Meet N’ Greet with the Sanganetti Motorsports #34 and it’s drivers Jimmy Davis and Vinnie Sanganetti along with the Benjamin Moore Paints sponsored #1M and its driver, 2011 Fonda Speedway 602 Sportsman Track Champion, Mark Mortensen. The Meet N’ Greet will take place at the museum before the racing program begins.


According to the book FONDA!, Irv Taylor’s first racing experience was less than spectacular for sure. It was in a four-cylinder, early thirties Plymouth coupe at Carroll’s Grove, the hillside track near Troy, NY in the spring of 1950.

By 1956, Taylor was at Fonda playing with the big boys, but the car was still modest. It was the resurrection of a pile of parts brought home from Syracuse by Hoppy Redner after a bad wreck. “They blew me off pretty bad in my little flathead,” Taylor said.

By February of 1959, however, Taylor was tooling around the new 2.5-mile Daytona asphalt tri-oval in Harry Caputo’s 283-powered 111 coupe at 142 MPH average! “As I recall,” Says Taylor in the book“, we might have been seventh at the end. First Sportsman. I do know this: I couldn’t get out of bed the next morning I was so sore. It was hang on and hold your breath. If we had ever hit that wall, wow.”

By the early 1970’s as he gradually retired, Taylor had become a highly respected racing figure who had competed on 32 tracks in the state of New York alone. At Fonda, arguably his home, he is credited with 10 feature wins in eight winning seasons, the first win coming on 7/20/1957 and the last coming on 5/30/1970.

Taylor’s way was a little different. After always fielding his own cars on the smaller tracks in the eastern part of the state, he usually brought a piece of his own making as a backup at Fonda. Whenever he ran for himself, he would end up pumping all the purse money back into his equipment. So, he usually sought out a ride. He figured the 40% he made as a driver went right into his pocket. “That way I always made some money,” he said in the book.

The book FONDA!, written by the late Andy Fusco, Lew Boyd, and Jim Rigney, is available for purchase at the Fonda Museum or by going to www.coastal181.com and is a must read for any fan who attended the Fonda Speedway and is interested in the history of the famous Fonda Fairgrounds track.

For more information you can go to the Fonda Speedway website www.newfondaspeedway.com