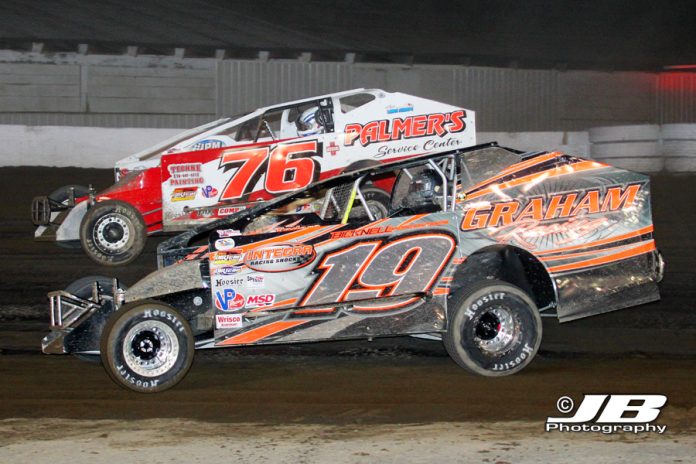 The museum is an appropriate place to have the ceremony for sure, as Dave, Jackie, and Jessica Lape along with Randy and Travis Colegrove have done a great job in keeping the history of the “Track of Champions” alive with the contents of the museum.

As far as the racing this Saturday is concerned, Satch Sales and Benjamin Moore Paints will sponsor the racing program consisting of all divisions in action along with a Late Model Reunion and the Mohawk Valley Vintage Dirt Modified Series. Starting time for the racing action will be 7:00 p.m.


The 2017 Fonda Museum “Bill Fake Pioneer Award” will be presented to Frank Trinkaus while the second Annual “Bruce Dostal Dedication to Fonda Speedway Museum Award” will go to Frank Blanchard and Corey White.

Jerry Cook was inducted into the New York State Stock Car Association (NYSSCA) Hall of Fame in 1993 and has seven career modified feature wins at Fonda, the first coming on 5/28/1966 and the last on 8/2/1969 to go along with the 1968 modified track championship at the “Track of Champions”.

Earl Mewhorter was a seven-time winner in the Late Model division at Fonda along with the divisions track championship back in 1973.

Jim Luke is tied with Jerry Cook with seven feature wins at Fonda, the first coming on 5/15/1954 and the last coming on 6/11/1960. Luke was the 1955 modified track champion at Fonda and was inducted into the New York State Stock Car Association (NYSSCA) Hall of Fame back in 2001.

John Constantino is a fitting addition to the Hall of Fame as he was committed to racing at the Fonda Speedway for many years and is a vintage sportsman car feature winner at the “Track of Champions” last year in 2016.

John Kollar is a three time modified feature winner at Fonda, the first one coming on 7/15/1995 and his last coming on 8/1/1998. He is currently the car owner of a 602-crate sportsman at Fonda, which is driven by Tim Hartman Jr.

According to the book FONDA, Jake Spraker has been a familiar figure at Fonda since the 60’s. He first owned a car for CD Coville and currently owns racecars for two of Fonda’s top drivers, 2016 Fonda Speedway 602 Crate Sportsman champion Rocky Warner, and 2016 Fonda Speedway Modified Track Champion Ronnie Johnson.

RC “Dick” Putman owned a racecar that was once driven by Lou Lazzaro according to the book FONDA! After Putman and Lazzaro had split, Putman joined forces with Dave Lape and together they won the 1983 Fonda Speedway Modified Track Championship along with many races, not only at Fonda but also at Malta and Weedsport too.

Clancy Miller was the photographer at the “Track of Champions” for many years and I can remember Jim King saying to this day: “Clancy Miller Photography, the round man with a square deal”.

Warren Roosevelt Sr. of Roosevelt Chevrolet began a sponsorship agreement with Dave Lape back in 1966 which lasted right to Lape’s retirement a few years ago.

Frank Trinkaus was inducted into the New York State Stock Car Association (NYSSCA) Hall of Fame back in 1988 and back in the mid-fifties was co-promoter of the Sidney (New York) Speedway according to the book FONDA! Then Fonda promoter Ed Fuez purchased additional bleacher seating from Trinkaus who became a Hall of Fame car owner.

So come to the Fonda Speedway this Saturday and join in on the special night as all of the new inductees are placed into the Hall of Fame at the “Track of Champions” which is a truly special place for sure. For more information about the Fonda Speedway, please go to their website www.newfondaspeedway.com