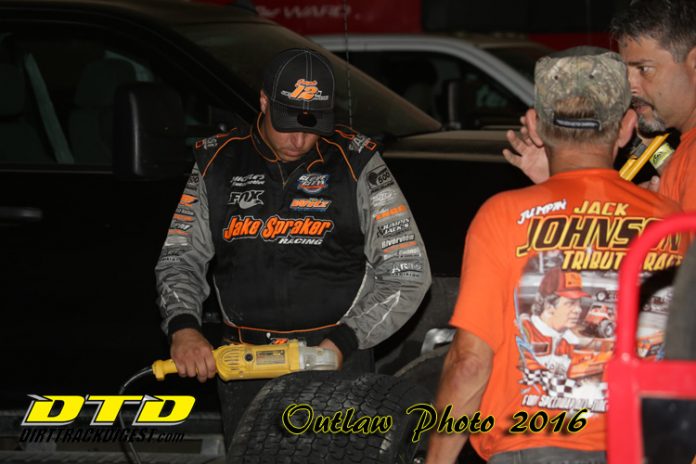 FONDA, NY – At the beginning of every racing season, fans, and drivers may look at their calendars and the racing schedules at local tracks and circle dates of events that are extra special to them, ones that they wouldn’t miss for anything in the world

One such event is coming up at the Fonda Speedway on Wednesday, August 2 when the third annual tribute race to the legendary Jack Johnson takes place at the “Track of Champions”. Johnson is not only the leader of the modified all time win list with 149 big block modified victories, he is also the driver with the most track championships at Fonda with 11 and this event is a fitting tribute to the legendary driver from Duanesburg, NY.

How special is this event? Just look at Stewart Friesen’s quotes after winning the event back in 2015, which are shown below.

“Tadd Parks and Eric Mack thought it would be cool on this big orange night to support Jack Johnson and ALS to do a Jack Johnson paint scheme,” Friesen said in Victory Lane. “They worked together with Dutchess Overhead Doors and Pilat to get it lettered up with Jack’s 2008 Syracuse paint scheme. We are going to take it off after this event. One side is going to go in the [Fonda Speedway] museum over here and Tadd wants to keep the roof.”


“If you look at the sport and the turn out here tonight, I don’t know how many people are watching this over the internet because I think they are all here tonight to support Jack Johnson,” Friesen said. “The money we raised for ALS [amyotrophic lateral disease/Lou Gehrig’s disease that Johnson is diagnosed with] was unbelievable. We are just a small part of this. Enjoy the orange color. It is Jack’s”.

Last year Matt Sheppard captured his third career win at the “Track of Champions” in the Johnson Tribute event, getting by Friesen with 10 laps to go in the event and said after his win:

“Once we got out front I knew we were OK but I just didn’t know if we would ever get there,” Sheppard said in Victory Lane. “I think I was better on the top and the bottom but catching him [Friesen} and passing him are two different things. I kept working him and working him. Finally on that restart we were able to get that crossover and get the lead.”

Also on the racing card at Fonda on August 2 will be a 30-lap GRIT Sportsman feature event paying $1,000 to win and $100 to take the green flag. The 30-lap event will be all green flag laps and GRIT Sportsman rules will be in effect.

But that’s not all, as the 12th Annual Hondo Classic will also be run in memory of the late Hondo Carpenter. The 30-lap event was scheduled to be held back on July 1 but was rained out that night. There will be a draw for starting positions in the heat races for the Hondo Classic and the top three in each heat will redraw for starting spots in the feature event.

General admission for the grandstand on Wednesday, August 2 at Fonda will be $20 with Seniors and Active Military $18. Children 10 and under will be $5 and if you wear orange you will receive a $2 discount off of your grandstand admission!

Pit admission with a license will be $30 and $35 without a license.

For more information on this special event at Fonda or for any information about the “Track of Champions” you can go to their website www.newfondaspeedway.com