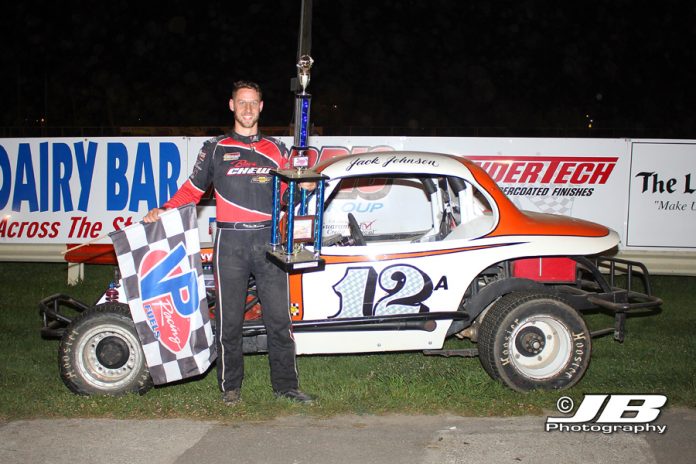 FONDA, NY- If you know anything about big-block Modified racing and Fonda Speedway you know its the house that Jack built. In celebration of his illustrious career, Fonda hosted its 3rd annual Jack Tribute race.

28-year-old Kings Ferry, N.Y., resident Mike Mahaney is a real fan of these tribute events. Its the second time he’s visited victory lane for the Jack tribute event. The first time in 2012 he cranked out a $12,000 victory in the 112-lap feature event. On this night he scored an impressive win in the 50-lap $5000 to win event holding off a late surge from Tim Fuller. Rounding out the top five were Stewart Friesen, Matt Sheppard and Bobby Varin.

The 50-lap event saw Mahaney on the outside of the front row with Sheppard on the pole. With the drop of the green it was “Super” Matt blasting out to a huge lead. The first 13 laps were run under green and Sheppard had built an enormous lead of nearly a ¼ track even through traffic which Sheppard encountered just six laps into the feature.

With the first caution coming out on lap 13, it bunched the field up but upon the drop of green again, Sheppard once again drove away from Mahaney. While the top two were drifting apart again, the action in the back was heating up. Friesen was running the leaders down. He put his Halmar sponsored entry into third on lap 19 after passing Jessey Mueller. Friesen would advance no further in the feature and wound up third on the night.


As the lap counter hit 21, things took a new direction. Mahaney ran down Sheppard to take the lead but a caution just two laps later would slow and regroup the field.

Sheppard and Mahaney were once again side-by-side for a start but this time Mahaney was quick to push the loud pedal and put his two race old Bicknell back into the lead. For the next 11 laps, Mahaney was pulling away from Sheppard and had no pressure from anyone.

The caution flag flew on another occasion, this time on lap 34 when Mueller came to a stop on the frontstretch. Mueller was having a masterful run in the top five all night mixing it up among the top players in Modified racing.

Again, Mahaney was quick to the accelerator pedal and maintained his lead but Sheppard was overtaken by a late charge from Tim Fuller aboard the Graham racing 19.

Fuller tried in vain over the last 10 laps to reel in Mahaney, diamonding the corners and getting a late surge on the last lap to reach Mahaney but just couldn’t close the gap allowing Mahaney to win by a mere .017 seconds.

Heroic efforts were put in by Tim McCreadie who piloted the Sweetners Plus 39 from second to last spot to 8th, Jimmy Davis found 7th and Ronnie Johnson, the son of Jack Johnson put his Jake Spraker owned 2RJ into a 9th place finish after starting 17th.

When Mahaney pulled his Buzz Chew Chevy sponsored Bicknell into victory lane. An exuberant Mahaney jumped out of his car and onto the roof. Taking a deep breath and looking to the sky you could see the weight of the world was just lifted from his shoulders.

“I want to thank my car owners for sticking by me. We’ve had a tough year and they could’ve said hey your just not cutting it and they could’ve replaced me with someone else but they choose to stick by me,” said Mahaney.

“This car is only two races old tonight. I was a little off on Sunday at Utica-Rome (Speedway) as I was not real comfortable in the car yet. But as the day went on there and then tonight I got more and more acclimated to the car,” Mahaney added.

Mahaney’s car owner Buzz Chew said, “We’ere having fun. Its been a tough year and half since we switched over from NASCAR Modifieds to the dirt. Mike’s a good driver and he’s good on equipment. We knew that there was going to be ups and downs. We’ve been at this a long time.”

Buzz went on to add,  “We still have four Troyers in our shop. We didn’t leave Troyer. We felt that the Troyer is good with a small-block but we just can’t get the Troyer to go with a big-block. This Bicknell was ready when we called. It was just a matter of who had equipment ready to go in the shortest amount of time”.

Tim McCreadie was aboard the Vic Coffey owned 39. “We were going to go to Ransomville next week but Vic said hey lets go to Fonda so were here. Plus our hauler for the Late Model and the generator are down so we are having to swap out all the equipment from my trailer to Vic’s while we regroup.”

McCreadie suffered a broken drive shaft in his heat race. It did a lot of damage and it was iffy if the team was going to make the feature. McCreadie started 25th and brought the Sweetners Plus sponsored entry home 8th…

Billy Decker was on hand in the Smith racing 91 however his night ended far to early. After just a few laps in his heat race the 91 suffered terminal engine woes and the team loaded up and headed home…

Fans were still talking about the sensational performance Stewart Friesen did a few weeks ago at Eldora. “The media was chasing me down at Pocono so I guess I didn’t do too bad at Eldora” quipped Friesen. Friesen is to fly to Michigan next week for another Truck race at the Michigan International Speedway. Its unclear if that would interfere with Friesen racing at Rolling Wheels next week. Look for Friesen to be at both Series races Monday at Merritville and Tuesday at Ransomville…

Also, Friesen wanted to clear the air on something that has been widely reported, “My wife isn’t retiring from Sprint Car racing. Its just she’s not sure when she will get back in the car. She’s a full time mom, she runs our t-shirt business 1z T-shirts plus she’s my biggest cheerleader and fan. She has a fan run website or Facebook page by a person who’s from Australia and he made the leap that she was retiring when she said she didn’t know when she was racing again.”

Dave Lape was on hand to mingle among the drivers and he runs the Fonda Museum. “I don’t stay to watch the races anymore. I’m sun up to sun down” quipped Lape. Lape was looking fit and trim and was in good spirits as he talked racing with some of the members of the Friesen race team…

Erick Mack who is the crew chief for Friesen said that his chassis building business, DKM, is going along great. So far this year they have sold about 18 chassis. Some of the drivers who have DKM are Stewart Friesen, Elmo Reckner, Jimmy Davis, Jeremy Wilder…

Short Track Super Series promoter Brett Deyo was on hand to hand out literature for his upcoming Stampede at Toga race to be held at Albany Saratoga on August 15th with a rain date of the 16th. This race is unique because its the first time at Albany Saratoga and its also open to Hoosier tires. For more info on the race check