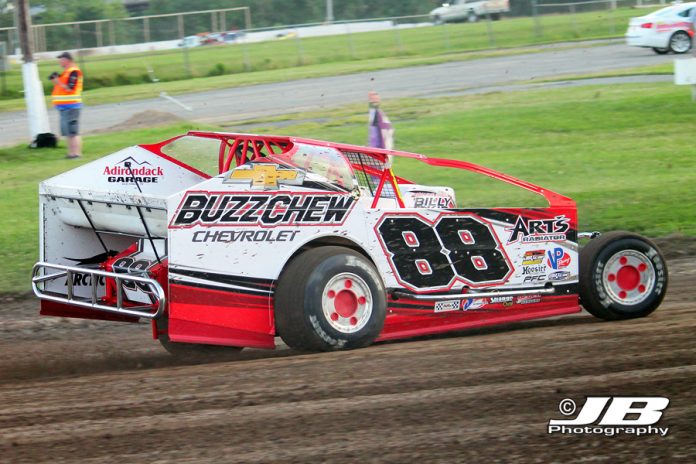 Fonda, NY – The “Track of Champions” Fonda Speedway held the Third Annual Jack Johnson Tribute event on Wednesday evening August 2, a 50-lap feature event paying $5,000 to win. When the checkered flag flew it was Mike Mahaney taking the big win in the Buzz Chew #88 Bicknell car, the new car just recently brought out to try an end the frustrating 2017 season Mahaney has had up until now.

Mahaney is no stranger to big money wins at Fonda as back in 2012 he won the opening event of the season known as the “Ice Jam” which paid $4,000. To top that all off he won the season ending event in 2012, also a Tribute to Jack Johnson, worth $12,000 to the winner.


“The track had a lot of grip in it tonight and I was just trying to stay close to the 9S (Matt Sheppard) who was leading early so that if he made a mistake I could capitalize on it,” Mahaney said in victory lane. “Then I was able to make it around Matt and a lap car for the lead.”

When Jim King asked Mahaney in victory lane how he found his ride in the Buzz Chew #88 Mahaney said “I think that he found me.”

Wednesday was a special event honoring a very special driver, one whom promoter Pete Demitraszek said “helped build this house and one of the reasons that Fonda Speedway is called the Track of Champions.”

There was a sea of “orange” in the large crowd that gathered at Fonda for the event which also featured the 12th Annual Hondo Classic honoring the late Hondo Carpenter with Nick Stone the winner of that event while Rocky Warner took home his sixth win of the season in the 30-lap GRIT Series event for the 602 Sportsman.

Guest co-announcer Bill Foley said after the event “to be able to call this race with Jim King honoring Jack Johnson was a thrill.”

Jessey Mueller’s father drove one of the Jack Johnson Vintage cars around the track for pace laps, one of those laps featuring a four wide salute to Jack and all the fans in attendance. When Joe Kriss’ green flag flew it was Matt Sheppard who was the early leader from his pole position start with Mahaney second from the outside pole.

Sheppard pulled away to a straightaway advantage by lap five and was already in lap traffic at that point as seventh place starter Stewart Friesen was the new third place car on lap 13 after getting by Mike Maresca. The first caution of the event was out on lap 13 and on the restart ninth place starter and current point’s leader Tim Fuller made his way into the top five.

Sheppard was in lap traffic again by lap 20 with Mahaney closing in at that point. On lap 22, Mahaney got to the inside of Sheppard in turn two to take over the lead with the yellow flag out again one lap later for the fifth place car of Mueller who came to a stop on the front stretch. Fuller continued his march to the front on the restart, moving into the third position and with 14 laps to go in the 50-lap event, Fuller was the new second place car after getting by Sheppard.

With 10 laps to go the top two of Mahaney and Fuller made it their own race for the win as they pulled away from Sheppard with Mahaney fast on the outside and Fuller quick on the inside. Over the closing laps Fuller would duck inside Mahaney in the turns but Mahaney kept his momentum up each time and kept the lead going down the straightaways.

Mahaney held on for the win in the “Jack 50” followed in the top five by Fuller, Friesen, Sheppard, and 20th place starter Bobby Varin.

“This team stuck with me while I was struggling, but we all hung in there and dug deep,” Mahaney said in victory lane. “It is amazing for me to come back here at one of the tracks that I got my start after having many different rides since in an event this big.”

The 30-lap GRIT Series feature for 602 sportsman started with two rookies Mike Block and Griffen Mansmith on the front row with Mansmith the early race leader from the outside row. Fourth place starter Rocky Warner made quick work of the top three and was leading the feature event when lap one was completed. From that point on the race was basically for the second position as Warner dominated the rest of the race and stretched out his advantage lap after lap.

Two consecutive yellow flags followed by a red flag on lap seven slowed the event, the red flag for a multi car pileup on the front stretch. Many cars were able to drive away while others were not so lucky and were done for the evening. On the restart, Chad Edwards was the new second place car with the top five at the halfway point consisting of Warner, Edwards, Dave Constantino, Connor Cleveland, and Tim Hartman Jr.

Edwards closed in on Warner in lap traffic with 10 laps to go but once Warner cleared a pack of lap cars with five laps to go while Edwards was still stuck behind them all it was clear sailing to victory lane for the Jake & Nancy Spraker owned #1J. Edwards, 10th place starter Cody Clark, Cleveland, and Hartman Jr. completed the top five.

“There was a whole herd of elephants behind me with a lot of great drivers here at Fonda in this race so you just gotta go because you never know,” Warner said in victory lane.

There was a four wide pace lap for the 12th Annual Hondo Classic for the pro stocks with starter Joe Kriss’ giving the white flag to the field from down on the track, much like the way it was done in the early days of the Fonda Speedway. Chuck Dumblewski and Nick Stone started the event on the front row with Dumblewski the early race leader.

Dumblewski and Stone remained side by side over the first two laps with Dumblewski holding on to the top spot each of those laps. From the drop of the green flag to the checkered flag these two great drivers spent many laps side by side, swapping the lead many times along the way. Through each of the six cautions during the event, Stone would choose the outside on the restart that was until the final restart on lap 28.

On the lap 28 restart, Stone choose the inside for the restart and maintained the lead at the drop of the green flag. Over the final two laps, Stone and Dumblewski swapped the lead several times but when the checkered flag flew it was Stone who stood in victory lane after winning the “Hondo Classic” in the STR Trailer Repair/RCT Roofing #27. It was his fourth win in the event after winning it back in 2007, 2008, & last year in 2016.

Dumblewski was a close second followed by Josh Coonradt, Dean Charbonneau, and Jason Casey. A total of over $3,300 in bonuses were collected for the 12th Annual Hondo Classic event by the Friends of Hondo Memorial Society from many sponsors and supporters of the event.

“We put a new body on this car for this event because I wanted to have a good looking car and I really wanted to win it,” Stone said in victory lane. “That was a great race with Chucky (Dumblewski). When I was trying to catch him I kept screwing up but I got by him on one of the restarts and settled in. Hondo was a heck of a guy, we used to hang out at the car show together and we started racing right around the same time. This is a big race for us.”

This Saturday, August 5 will be Police, Fire, and EMS Appreciation Night featuring “Kiddie Rides”. The first green flag of the evening will fly at 7:00 p.m. For more information about the “Track of Champions” you can go to their website www.newfondaspeedway.com