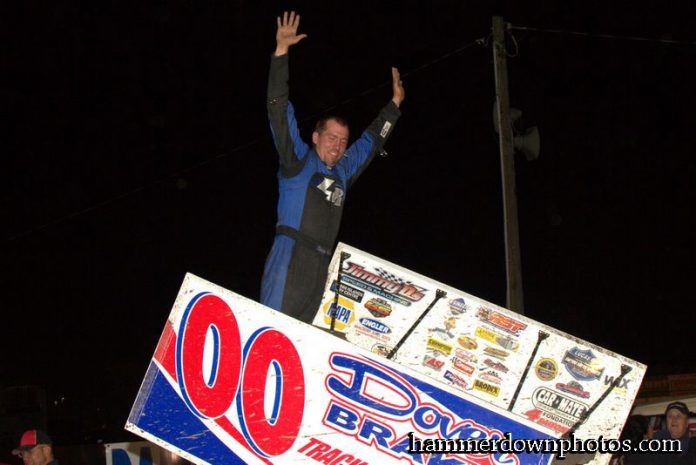 FONDA, NY – Danny Varin enjoys when the winged sprint cars come to not only his home track, but his home town. The Lucas Oil Empire made its return to the Fonda Speedway for the Earl Halaquist Memorial and when the checkered flag fell, Varin lapped up until the eighth place finisher for his $2,075 victory.

The annual Earl Halaquist Memorial was career win #5 which paid points for the overall Lucas Oil Championship and the NAPA Auto Parts US Tour.

While it looked like a walk in the park by the second generation driver, his actual attendance was in jeopardy until the night before. “Our motor actually seized up last week at Canandaigua on the cool down lap,” Varin talked about his troubles. “We went over the car on Sunday and found the troubles so we had to take it to Jimmy D’s. We put the motor in last night and didn’t even fire it until we got here!”

With the performance on the track, you could tell that it was indeed firing on all cylinders. He set fast time in his qualifying group, made the inversion and then drew the front row. It was clear when starter Joe Kriss dropped the green he was the driver to beat.


“I was glad we were after the mods tonight, they widened the track out and it was real racy,” Varin continued, “My car could just go anywhere which was good as there were a lot of slower traffic.”

A red flag on lap four was the only time the field got bunched up. With the final 21 laps going green, it enabled Varin to build up a good sized lead. Even if he did have issues it was most likely a lead he would have given up.

“With ESS you can never let up, you don’t know who is behind you so when the track is like this you go as hard as you can,” he went on, “I just can’t thank Dover Dave and all my guys enough. We have a good car each time it unloads, we don’t have a lot of equipment but we try to make sure it’s ready each time we come to the track.”

While Varin was doing his thing, a crowd pleasing duel for the runner-up slot wasn’t decided until the final lap when Cory Sparks slipped past Paulie Colagiovannu in traffic to put together another podium finish at the track also close to his home.

“Lap traffic slowed Paulie up there a little bit got so we could get around him,” Cory continued, “We really had a good car to come from eighth to get second and to do it here (Fonda) was nice. We have a lot of friends here to watch us race.”

When asked about a shot at Varin, Sparks did say with a smile… “I would have liked a caution, see if we could have made him (Varin) sweat a little bit. But, he definitely earned it.”

Colagiovanni was home for another fine podium finish followed by Jonathan Preston and Dylan Swiernik. Unfortunately Swiernik didn’t go directly to scales and under ESS rules he was scored on last position. This moved hard charger Jeff Cook to fifth.