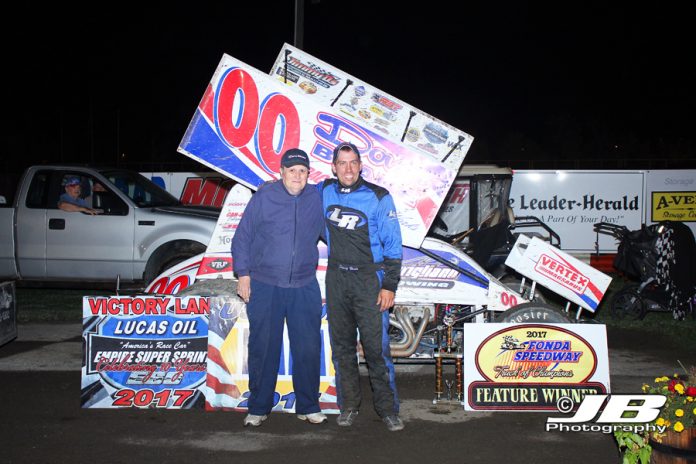 Ahhh, rain delays. The bane of outdoor summer activities. It’s tough enough on racecar drivers to compete week-in and week-out without New York’s odd patterns of weather. But the Fonda Speedway track crews were up to Mother Nature’s challenge on Saturday night, as they worked continuously throughout the evening to get the track surface in race-able condition for eight different classes after some afternoon/evening showers. Normally, there’s six weekly divisions at ‘The Track of Champions,’ but the Empire Super Sprints (ESS) and the Mohawk Valley Vintage Dirt Modified Series came to join the party, making for a marathon of an event that went unfinished into the wee hours of Sunday morning.

The delays pushed both the Sportsman and Rookie Sportsman features into the next week, making double features for them next Saturday, August 19. The Modified race, run just after midnight, was won by Stewart Friesen. Jim Normoyle took the checkered in the Pro Stocks – they ran their event just before the Modifieds.

The Empire Super Sprints feature finally rolled onto the track at around 12:35 a.m. and took the green five minutes later. Jonathan Preston and Danny Varin led the field to the green for their 25-lap feature event, with Varin jumping out to the early lead. Through a few yellows and one red flag, Varin lead all 25 laps, pushing through multiple waves of lapped traffic to score his first win of the season in a sprint car at Fonda… at 1 a.m. sharp.

“The first four laps, I just felt like I was on rails. It was just stuck like glue,” Varin said. “Once we started to get some tire heat, it started fading and getting a little loose. But even at the end, as long as I put that right-rear in the grip, I was pretty good.”


“We flipped the car upside-down and had the frame welded up this week and the motor out – that’s running tip-top,” Varin continued. “It wasn’t an easy week but it definitely paid off.”

Varin fended-off the chase from third-place finisher Paulie Colagiovanni for most of the race, who has had a stellar four weeks of sprint car competition for a competitor of his age, posting a top-ten with the All Star Circuit of Champions at the Outlaw Speedway on July 28 and a runner-up finish with ESS at the Canandaigua Motorsports Park on August 5. Colagiovanni ended up third, but Varin knew he had to move through traffic quickly to avoid pressure from the 10C.

“Paulie’s been so good ever since he drove that 410, he’s just been on fire. I didn’t really want to give him the top, but he was on the worst part of the racetrack and that’s the reason I picked it,” Varin said. “I didn’t have my mind made up until we were about ready to go green of where I wanted to be, but it worked out. We were able to get the holeshot and jump back to the top.”

A red flag and multiple yellows forced Varin to be at the top of his game on restarts and in lapped traffic – something he does quite well at Fonda.

“When you have a good car and get into heavy lap traffic like that, it’s a joy,” he said. “You can see everyone else just struggling out there and you’re hitting your marks. I love lap traffic – has it boned me in the past? Yeah, but passing racecars is fun, so it doesn’t matter if it’s lap cars or front runners.”

Varin was also quite pleased with the track conditions, as lots of rain always makes for a very tacky surface and plenty of flat-footing throughout the evening.

“I think I held it wide-open for 20 green flag laps. I think I had to back out of it a few times for a car that was coming to the wall, but it was probably good for the motor – let it breathe a little bit. This thing was running like a champ tonight,” he said.

Cory Sparks had the lengthiest charge to the front, after pulling the number eight pill in the redraw, but was able to make it all the way up to second after pulling a spectacular three-wide move around Colagiovanni and a lapped car on the high side of turns three and four to take the runner-up spot with just two laps remaining.

“We tried to set our car up for the end of the race, and lapped traffic definitely did play a factor,” Sparks said. “He [Colagiovanni] got choked up in lapped traffic so I was able to get around him. Everybody else’s car was falling off and ours was getting better and better.”

Sparks seemed to have a consistent car setup throughout the race, as he was always gaining on the car in front of him. He said a caution was what he needed to get a shot at Varin for the win.

Paulie Colagiovanni came across the line in third after running second for most of the race. Starting from the sixth spot, he passed four cars in just three laps to start his chase on Varin. Sparks was able to get around him in the end, but it was a very strong race for the teenager from Cicero, New York.

“I wanted to be on the outside, and that’s where we started, so I was just hammer-down right on the rim,” Colagiovanni said. “I was in second, and then I was messing around with lapped traffic for a little bit and Cory Sparks, he’s a really good driver, got around me but it was a really clean race right up on the top.”

The top side seemed to be the fastest way around the track that evening, which just so happens to be Colagiovanni’s line of choice. The track seemed to play right into his hands.

“It was pretty fast, wide open – I like it when it rains,” he said. “Usually, Fonda’s a little slick and there’s a little cushion and a little bottom but tonight it was just wide open, right on the rim.”

The ESS dash unfortunately featured an incident that delayed the event’s progress even further, when Jeff Trombley in the Warren Alexson-owned number 3A caught a wheel of Billy VanInwegen’s number 56 going through turns three and four, sending him end-over-end multiple times before hitting the catch-fence and landing on the paved walkway of the turn four grandstands. A very scary incident, but no one was hurt. Except Trombley’s racecar – it was towed back to the pits in two pieces.

Keith Granholm got into the turn one wall very hard on lap four of the feature, causing him to flip wildly across the track, destroying his ride. Amazingly, all other cars avoided making contact with him, as he ended up in the middle of the track with cars going by at racing-speed. Granholm was uninjured. 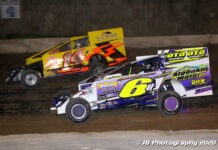