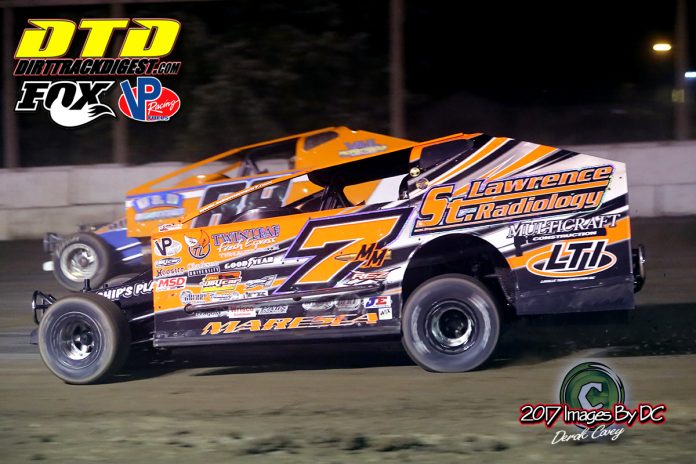 FONDA, NY – Taylor Made sponsorship night was a truly special one at the “Track of Champions” Fonda Speedway on Saturday evening and it was an evening of “career firsts” for four drivers at Fonda.

Number one was Tim Fuller taking home his first ever track championship at Fonda. Number two was his teammate Mike Maresca winning his career first modified feature at Fonda or anywhere for that matter. Number three was Devin Willis winning his first career limited sportsman feature in one of Maresca’s former St. Lawrence Radiology sponsored race cars. And last but certainly not least was Nick Scavia taking home his first career win in the 602 sportsman division.


“I’ve never seen more diehard fans then I have here at Fonda and I’ve been to a lot of race tracks,” modified champion Fuller said during the championship celebration. “We’ve had a bad tour run (Super DIRT Series Tour) in 2017 but here at Fonda we haven’t been out of the top five all year and consistency got us the title. We are also very thankful to have gotten hooked up with the Maresca Family and St. Lawrence Radiology. They are great people and were also a big part of us being able to get this title at Fonda and we look forward to a return here to the Fonda Speedway for the 2018 season.”

“2017 has been a good season for us, my win here tonight was our 20th of the season,” sportsman champion Rocky Warner said. “Overall it’s been a great year really thanks to Jake & Nancy Spraker who give us all of this awesome equipment to work with.”

“We had a real good year, a few bad nights but my crew really stepped it up so I really have to thank them and all of my sponsors,” pro stock champion Kenny Gates said. “I guess you could say that we lost the battle but won the war.”

The first 20-lap modified feature saw Troy Palmer and Mike Maresca on the front row with Maresca leading at the drop of Joe Kriss’ green flag. Ninth place starter Josh Hohenforst was coming to the front early in the event and just before the halfway point took the second position away from Palmer. At that point Maresca held a half track lead and not even lap cars were going to stop this young man who led all 20-laps on his way to his first ever modified feature win of his career at any track!

Tim Fuller started the event in the 10th position and with five laps to go took the third position away from Palmer but that’s as far ahead as he would get as Maresca took the win in the St. Lawrence Radiology sponsored Teo car followed by Hohenforst, Fuller, fourth place starter Shaun Pangman, and 13th place starter Jeremy Wilder.

“This is our first win in a modified so it is pretty special,” Maresca told victory lane announcer Daniel Haslun after the win. “Fonda is a great track to race at, they treat us like family here, and we have had a lot of fun here this year. Fonda is a hallowed ground in racing so it is really special to be able to win here.”

Craig Hanson took the early lead in modified twin 20 #2 only to have third place starter Scott Huber get by for the lead before any laps were complete. Huber led the first two laps but Hanson stayed close enough to be able to take the lead away on the inside of turn four on lap three. By lap eight, Hanson held a straightaway advantage over Justin Boehler and Bobby Varin with 12th place starter Stewart Friesen now in the fifth position.

Friesen got by both Varin and Boehler for the second position just before the caution came out on lap 10 for Boehler whose great run came to an end on the front straightaway as he came to a stop while running in the top five. That put Friesen on Hanson’s rear bumper for the restart which Friesen took full advantage of as he took the lead away from Hanson on the outside of turns three and four.

Friesen pulled away from there to win his sixth of the season and the 47th of his career at Fonda in the Halmar #44 DKM “Cyclone” chassis car over Varin who nipped Hanson for the second spot on the final lap, Hanson, eighth place starter Josh Hohenforst, and 11th place starter Tim Fuller.

“The race track came around to us at the end,” Friesen said in victory lane. “I tried the outside in the first race but it didn’t work for me so the DKM crew changed a lot on the car to make it work for me in the second feature.”

Josh DeMagistris led at the drop of the green flag in the delayed sportsman feature from 8/12 with Ray Zemken in tow. At the completion of lap one many of the cars that started farther back had already made their way to the front including Mark Mortensen who was up to the fifth position after starting 10th and Rocky Warner who was eighth after starting 12th.

While Mortensen had issues after contact by David Manchester flattened one of his right side tires, Warner continued to drive to the front, sitting in the second position on lap six after getting by Zemken, and quickly closing on the leading car of DeMagistris. Warner got by DeMagistris for the lead on lap 10 and went on to his seventh win of the season over DeMagistris, 11th place starter Cody Clark, fifth place starter Nick Scavia, and eighth place starter Aaron Burton.

Anthony Cardamone and Griffen Mansmith started the regularly scheduled sportsman feature on the front row but never really did “go” at the start, causing a pileup in turn two and a lot of damage to a few cars. Mansmith was fortunate to not have any damage to his car even though he was one of the drivers who started the wreck and was able to lead on the restart.

That lead didn’t last too long however as seventh place starter Nick Scavia took the lead before lap one was completed as he was able to clear the wreck at the start and gained many positions after some cars had to retire from the event due to the wreck. At the lap five point in the event, Tim Hartman Jr. was the second place car with Chad Edwards third after starting ninth and Rocky Warner fourth after starting 12th.

Scavia was in lap traffic on lap 11 allowing Hartman Jr. to close in but with five laps remaining Scavia was getting by the lap cars better than Hartman Jr. was and pulled away to a slight advantage. Scavia held the advantage to the checkered flag to win his first career feature in the division in the Capital Demolition sponsored #17 Teo car after just graduating from high school a couple of months ago. Hartman Jr., Edwards, Warner, and 10th place starter Cody Clark completed the top five in the event.

“The track was a little rough tonight so you had to be aggressive out there,” Scavia said after the win. “I just put my foot down and never looked back. Thanks to my sponsors and I wouldn’t be anywhere without my crew.”

The pro stock feature was a great one with Ivan Joslin leading at the drop of the green flag to start the event. Chuck Dumblewski started the event in the fifth position and took over the second spot on lap four after getting by Randy Cosselman. On lap eight, Dumblewski used an inside move on the backstretch to get around Joslin for the lead while Luke Horning was the new third place car after starting 11th.

Joslin got the lead back on lap 11 after a spinning car in turn two caused Dumblewski to check up allowing Joslin to get by on the inside for the lead. Joslin kept his car down low once he got the lead this time and held on to the lead as Dumblewski was trying everything to get by. The final caution in the event came out on lap 17 and on the restart Dumblewski was the new race leader with Horning now second.

After a one lap side by side battle with Dumblewski, Horning took the lead away on lap 19 and went on to his third win of the season and the 12th of his career in the division in the STR Trailer Repair sponsored car over Dumblewski, Joslin, seventh place starter AJ Walters, and 10th place starter Kenny Gates.

“This is our spare car that we bought from Gus Hollner and we really didn’t want to run it,” Horning said in victory lane. “This car is just so dependable. Chucky (Dumblewski) was gone, I was just settling in to run for second but was also hoping for a caution which we got.”

Johnny Young took the lead on lap two of the street stock feature and went on to his fourth win of the season and the seventh of his career at Fonda over Joey Wilson, Steve Cosselman, Cliff Haslun, Bubby Shaffer, Jim Groncki, and Harold Chadderden.

Fonda Speedway is now closed in preparation for the Fonda Fair. Please go to their website www.newfondaspeedway.com to keep up with what is coming up in September at the “Track of Champions.”