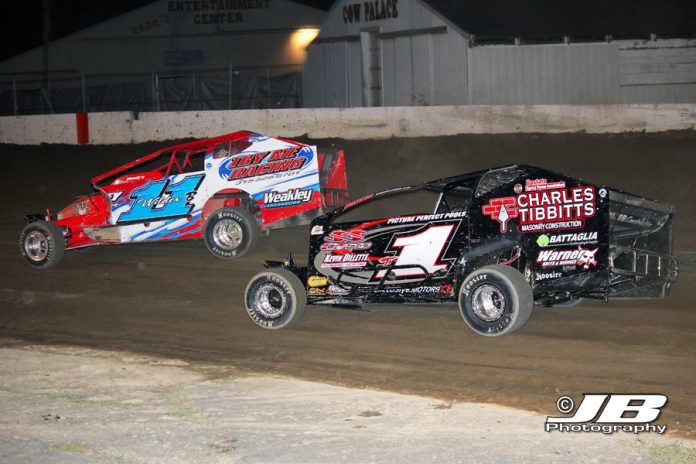 FONDA, NY – After a three-week break for the annual Fonda Fair, the “Track of Champions” Fonda Speedway will be back in action on Saturday, September 16 with a special racing program consisting of a 50-lap event for the 602 sportsman titled “The Grand Daddy”.

The race, which will be presented, by Tom and Sharon Spencer and Adirondack Leather will pay $2,000 to win plus additional lap money that will also be available to the competitors.

The 602 sportsman event will also be part of the GRIT Series while the modifieds, pro stocks, and street stocks will also be in action with a starting time of 7:00 p.m. Admission to the event will be $14 for adults; $12 for seniors, military, and kids; and $5 for children under 12.

Making the 602-sportsman event even more special is the fact that it will be the “Don Warner Memorial”. Don was a great friend to racing at both Fonda and Glen Ridge as an event sponsor and a competitor in the street stock division. You could always see Don in the pits in support of his son Rocky throughout Rocky’s racing career as well.


Don had a successful racing career himself with three feature wins in the street stock division at Fonda, the first win coming on July 5, 2003 and the last on May 22, 2004 back when there were “A”, “B”, & “C” events that had to be run because of so many cars competing in the division. It was also a time when Don and his son Rocky were running together in the division, which had to be a special time for both of them.

Don’s success wasn’t only at Fonda however as he also has a total of two wins in the street stock division at Glen Ridge, the first one coming on May 30, 2004 and the final one on August 20, 2006. The “Grand Daddy” event was held last year at Glen Ridge with Rocky Warner the race winner.

More details will be announced as the week progresses leading up to the event on Saturday, September 16 and you can keep track of those updates by going to the Fonda Speedway website www.newfondaspeedway.com