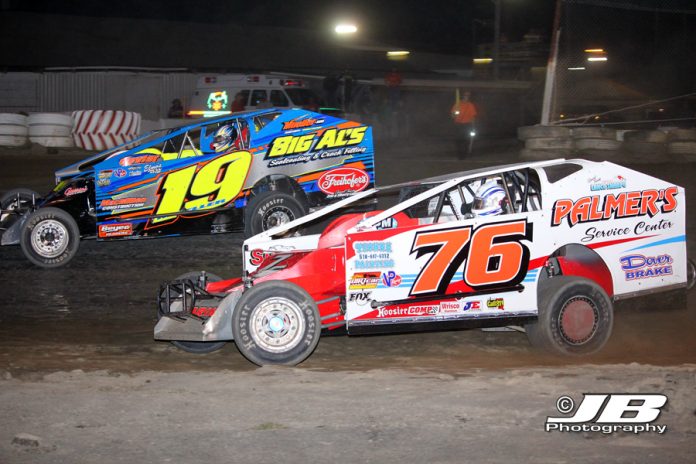 FONDA, NY – The 2017 Prelude to the Party weekend at the Fonda Speedway began on Friday evening with a pit area full of race cars in attendance for a racing program consisting of the King of Dirt (KOD) Series event for the 358-modified and sportsman series along with the CRSA sprint cars, pro stocks, and street stocks. When the final checkered flag of the evening flew it was two familiar faces in victory lane along with a couple of first time winners.

The KOD 358-modified feature was taken by Bobby Varin who won his second consecutive feature event at Fonda which was his fourth win of the season and the 59th of his career in the Palmer’s Service #76 Teo car owned by Alton and Carole Palmer. Varin is currently on a hot streak with the Palmer car, winning not only the last two events at Fonda but also winning a recently held KOD 358-modified feature event at the Albany Saratoga Speedway.

Rocky Warner continued his dominance of the sportsman division at Fonda, winning his eighth feature event of the season and the 25th of his career at the “Track of Champions” after winning the KOD sportsman series event in the Jake Spraker owned Teo car.


Other winners at Fonda on Friday evening were first time winners Gus Hollner in the pro stock division and David Cook in the street stock division while Kyle Smith took the win in the CRSA sprint car series feature.

Charlene Graham and her son Tanner combined efforts singing the National Anthem to start off the racing program and come modified feature time it was Jessey Mueller and Matt DeLorenzo on the front row at the start of the 35-lap event. Mueller took the lead at the drop of Joe Kriss’ green flag and by lap seven held a straightaway advantage over DeLorenzo, Jeremy Wilder, Bobby Varin, and Elmo Reckner.

When the front end of the #3D of DeLorenzo collapsed in turn four on lap nine he ended up on the infield which brought out the first caution of the event and he was out of the race at that point placing Vain in the second position. Reckner took over the third position on the restart with Mueller in lap traffic by the 17th lap of the event while Mike Maresca was on the move after starting ninth.

Varin was able to close in on Mueller in lap traffic and on the inside of turns three and four on lap 20 Varin made the pass for the race lead. Mueller raced three wide in lap traffic trying to keep pace with Varin but continued to fall back in the lineup as Wilder and Maresca both got by him for the second and third positions with only five laps to go in the race.

When Wilder suffered a flat tire on lap 31 while in the second position he drove to the pit area with Maresca inheriting the spot at that point. Maresca was possibly the fastest car on the track during the final laps but it was Varin who got the win followed by Maresca, Mueller, Reckner, and 10th place starter Mike Mahaney.

“This season has been a good one but the last couple of weeks have been phenomenal,” Varin said in victory lane. “We had a really good car tonight, the JPM engine is running really well, and we’ve got momentum going right now. I am very happy with the performance of the car and our team.”

The luck of the draw placed Connor Cleveland and Rocky Warner on the front row for the start of the 30-lap KOD sportsman series event with Warner taking the early race lead. As it turns out he was never seriously challenged in the event and easily took the race win but behind him there was plenty of racing taking place.

On a restart after an early caution, fifth place starter Mark Mortensen and ninth place starter Chad Edwards both got by Willy Decker for the third and fourth positions. On another restart on lap five, Edwards was the new second place car putting Cleveland back to the third spot with 11th place starter Dave Constantino now on the move.

Constantino was the new second place car on lap 10 after getting by Edwards for the spot and at the halfway point Warner, Constantino, and Edwards pulled away from Cleveland to make it a three car race for the win. Constantino pulled in on the leader on lap 24 when Warner was held up by a lap car, but once Warner cleared the lap cars of Michael Sabia and Floyd Billington it freed him up to pull away as Constantino was stuck behind in lap traffic.

“The track was tough tonight, I didn’t really know where to run,” Warner said. “I actually thought that I was a sitting duck but with Jake’s equipment, Fox Shocks, and my crew this is a whole group effort.”

Outside pole starter Gus Hollner took the early lead in the 20-lap pro stock feature after he and inside front row starter Jim Normoyle ran the entire first lap side by side. Hollner and Normoyle pulled away from the rest of the field by lap 10, but when the caution came out on lap 14 it brought the field back to the leaders.

Seventh place starter Chuck Dumblewski was the new third place car on the restart with 2017 track champion Kenny Gates fourth after starting eighth. Hollner held on for his first career win at Fonda over Normoyle, Dumblewski, Gates, and Justin Knight.

“The car was fast,” Hollner said after the win. “I just tried to take my time and stay smooth.”

Joey Wilson led the 20-lap street stock feature from the pole at the drop of the green flag but when lap one was completed it was third place starter Johnny Young who held the race lead. Wilson and Young took turns leading laps four and five but when they made contact with each other on the front stretch and got into the wall it allowed 14th place starter David Cook to take over the lead on lap six.

Kyle Smith led at the drop of the green flag in the 20-lap CRSA sprint car feature event with Mike Kiser in tow. On lap four, former Fonda Speedway modified track champion Jeff Trombley was the new third place car while Kiser was now pressuring Smith for the lead. Trombley made it a three way battle for the lead at the halfway point with Trombley taking the second position away from Kiser on lap 14. Josh Pieniazek took the third position away from Kiser with only two laps to go but at the checkered flag it was Smith taking the win over Trombley, Pieniazek, Kiser, and Eddie Strada.

“The car felt good up top,” Smith said in victory lane. “I’ve got the easy job, I just drive the car,”

Night one of the “Prelude to the Party” weekend concluded with the “Moonshine Junkies” band playing music in the Entertainment building on the grounds.