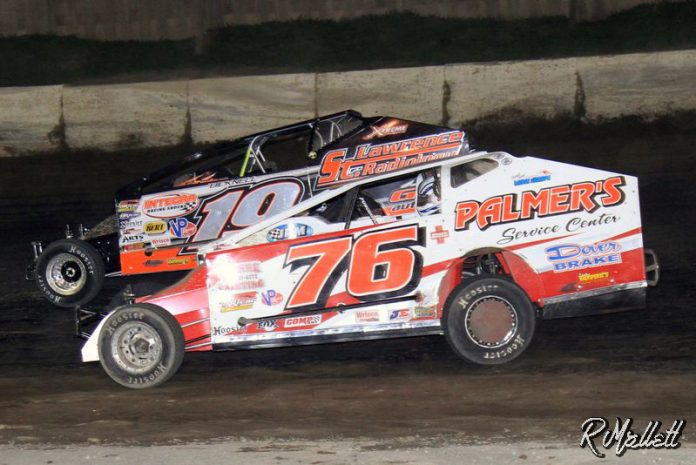 FONDA, NY – Saturday night’s St. Lawrence Radiology 100 at Fonda Speedway came down to a pair of track champions.  Tim Fuller, the 2017 title winner at Fonda, showed the way with multi-time champion Bobby Varin in pursuit.  It looked like Fuller was had the win sewn up as he had a comfortable advantage over Varin with just a handful of laps to go.  Unfortunately for Fuller, his right rear tire gave way on the final lap handing the top spot over to Varin who led the final circuit for his first Super DIRTcar Series win of the year.

Varin, from nearby Johnstown, N.Y., picked up first ever series win with the Super DIRTcar Series at the Fonda Speedway back in 1995.  Saturday night’s win was his first since with the traveling series since July of 2012 at the Albany-Saratoga Speedway.  Making the night even more memorable for the Varin was the fact that he was chased to the line in the second position by his son Danny Varin giving the father son duo the top two spots on the podium.

“This is the best and he’s (Danny) the best,” said a happy Bobby in victory lane.  “Danny Varin, class act, number one in my book.  If I can’t win it I want him to win it.  I’m so proud of him and what he’s done in Sprint Car racing and what he’s done in Modified racing.  There isn’t a prouder father in the state of New York right now I guarantee it.”

Peter Britten redrew the pole and took the early lead of the race with former Fonda regular Pat Ward falling in line in spot number two.  Britten kept up the pace early with Ward in tow before caution came on lap eight for a slowing Rocky Warner.


The restart on lap 13 saw Britten holding his lead while another former Fonda champion was making moves. Stewart Friesen was able to negotiate his way around Ward to secure the second position in line behind Britten.  Britten pace was strong causing him to find traffic for the first time on lap 20.  Friesen was on his bumper once he was forced to work traffic.

Britten went to the bottom to get by a slower car on lap 26 with Friesen seeing an opening on the outside.  The Sprakers, N.Y., pilot jumped the top and drove by Britten to wrestle the lead from the Australian for the first time.  A few laps later, Britten also relinquished the second position to Fuller.

Friesen kept up the pace keeping Fuller, Britten and all other challengers at bay even after a few cautions tightened up the field.  As the event reached halfway, Friesen led Britten with Fuller, Ward and Keith Flach completing the top five.

Six circuits later Friesen got his first taste of traffic as the leader as he now found himself looking for the fast line around the speedway in order to keep everyone in line behind him.  On lap 59 he got a short reprieve as Brian Gleason slowed with a flat tire bunching the field up for a double-file restart.

Green came on lap 64 with Friesen at the point.  That lead lasted until the field exited turn two.  Britten dove low on the backstretch taking the lead back from Friesen. Friesen was forced to get in line as they reached the third turn.  Now back in front, Britten began opening up the gap on Friesen.

On lap 67 the younger Varin, Danny got a flat tire sending him pit-side for fresh rubber on the Ed Monger owned No. 93.  From that point numerous experienced tire issues developed as several cautions slowed the pace of the event.  Even with multiple restarts, Britten continued to keep Friesen at bay until his tire went south on lap 81.

Britten’s strong night went away when his right rear tire finally gave way on lap 85.  He relinquished the lead to Fuller who had Bobby right behind him in the runner-up position.  That’s the way it would stay for the next several laps and restarts.  Bobby gave every effort to get by Fuller working him over.  He could pull up next to him several times but was never able to complete the pass.

Bobby got his last shot on lap 96 as Rich Scagliotta’s No. 8 slowed with a flat.  Bobby pushed Fuller as hard as he could at the green but it looked like it wasn’t going to happen.  Fuller pulled away racing to the line with two laps to go with a five car-length lead.

Fuller took the white in front of Bobby.  He raced to the first corner and the car shoved up the track as the right rear tire finally gave way.  Bobby shot underneath of him and kept Danny behind him to pick up the $6,000 victory.

“I could see that his tire was going bald,” stated Bobby.  “I just got on the gas on those restarts and tried to run him as hard as I could to get him to step on the gas a little more.  He had a darn good car, ran a perfect line and blocked when he needed to block.  Hats off to him.  He had it in the bag and I just got lucky.”

Danny settled for second.  He did some had driving to get back up through the field after experiencing a flat early.  He applied as much pressure as he could to his dad Bobby but just couldn’t find a way by.

“We saw the caution come out at the end and I thought I had something for him,” said Danny.  “We were rolling the top there pretty good.  We rebounded.  I think was setting 25th on lap 75.  We probably should have pulled it in.  Then we just started picking them off and the car was good.  Can’t ask for much more.  I would have liked one more spot, but it’s good to see him win it.  I wouldn’t rather have anyone else win it besides me.”

Ward, who felt his tire going away early, stayed patient throughout the race.  The veteran from Genoa, N.Y., felt the track starting to become abrasive so he slowed his pace to the keep the tires on the car.  It paid off as he finished in third.

“I was just hanging on,” commented Ward.  “I stayed on very bottom of the track and tried to run in the brown.  I knew I went with a 300, the softest tire they make, so I knew I was in trouble about the 20th lap.  I got lucky to finish third.”

Current series point leader Billy Decker recovered from his own flat tire to finish in fourth while Matt Sheppard, who started deep after going to a backup car, completed the top five.

Friesen was the overall fast-time on the night with an 18.770.  Heat race winners included Ward, Friesen, Jimmy Phelps and Fuller.  The lone consolation event was won by Jessey Mueller.

The next event for the Super DIRTcar Series Big-Block Modified takes place in just over a week at the Oswego Speedway with NAPA Auto Parts Super DIRT Week XLVI.  Everyone will be vying for the win in the Billy Whittaker Cars 200.