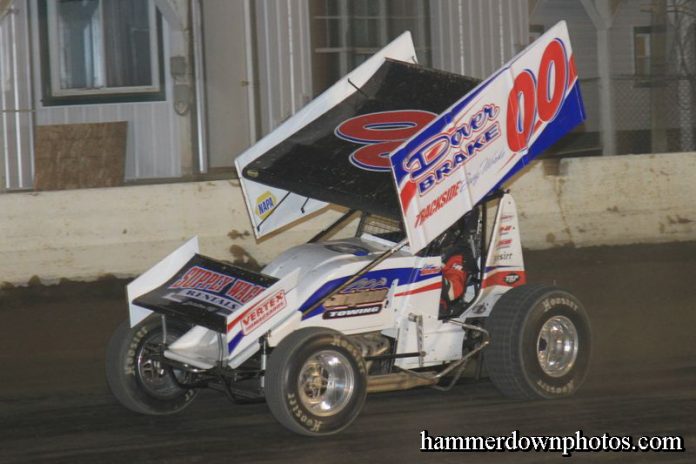 FONDA, NY – On Saturday evening the final event of the 2017 racing season was run at the “Track of Champions” Fonda Speedway with a racing program presented by St. Lawrence Radiology, Dr. Maresca. On the program was the Kramer Williamson Memorial for the 360 sprint cars.

The 25-lap, $2573 to win Kramer Williamson Memorial began with a four wide parade lap paced by Williamson’s daughter Felecia in his #73 sprint car. At the drop of the green flag Bobby Varin led from the outside pole with Danny Varin second after starting fifth. Danny took the lead on lap seven coming down the front stretch to complete the lap when Bobby slowed suddenly going into turn one.

“My steering wheel came off coming out of turn four so I had to let off in order to put it back on,” Bobby Varin said at the conclusion of the event. “Then I had to hold the steering wheel on for the rest of the race.”

Once Danny took the lead he pulled away to a huge advantage over Stewart Friesen who took over the second position on lap 12. One more yellow flag slowed the field on lap 19 but not even that or lap traffic with two laps to go was going to stop Danny Varin on this night as he went on to the win over Friesen, Bobby Varin, Mike Mahaney, and Coleman Gulick.


“We worked real hard this week getting ready for this two day event at Fonda,” Danny Varin said after the win. “We loosened the car up and I knew not to get out of the rubber tonight after taking the lead from dad.”

“The track was tricky tonight but it was still a great day,” Friesen said after finishing second at Fonda and fifth in New Hampshire in the Camping World Truck Series event.” The rubber made it a very tough track tonight here at Fonda.”

For off season information about the “Track of Champions” Fonda Speedway please go to their website www.newfondaspeedway.com