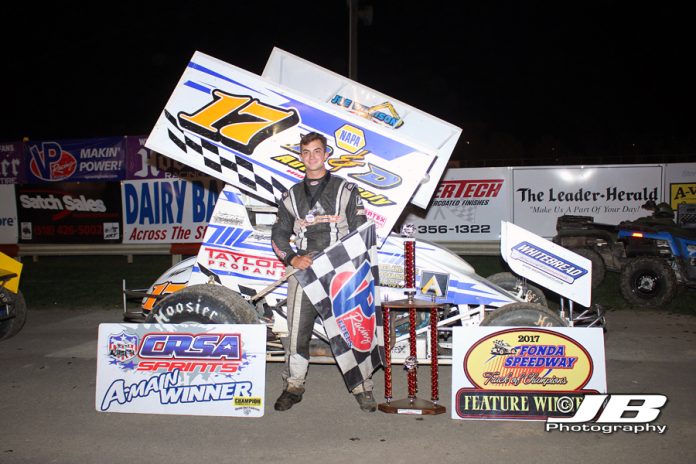 FONDA, NY – It was an eventful evening for the return of the Super Gen Products/Champion Power Equipment CRSA Sprint Tour at Fonda Speedway. When the final checkers flew, it was Great Barrington Massachusett’s Kyle Smith who would come out on top and be able to grace Fonda Speedway Victory Lane with his presence.

The first turn of the first lap of the first heat race would see a massive incident that would involve four competitors. Brett Jaycox, Mark Taylor, Dave Ferguson, and series points leader Thomas Radivoy would all be involved in a violent pile-up that would end between turns one and two of the Track of Champions. Ferguson sustained the worst of the damage with a totally destroyed 45 Speedy’s Cleaners car. He walked away from the incident without any serious injuries. Brett Jaycox had to retire his 07 Outlaw Motorsports entry for the evening. He escaped serious injury as well. Thomas Radivoy would be able to come back and salvage whatever points he could in the main event. He would do this with the aid of a borrowed wing from Geoff Quackenbush. Mark Taylor was also able to return for the main event later on in the evening.

Modified Competitor Tyler Boniface and Kyle Smith would bring the field down to the green flag for the start of the 20 lap A- main event. Smith would quickly take command of the lead early in the event. Mike Kiser, from Cooperstown, seemed to have an early short-run advantage in his 99 Kiser Sand and Gravel car. But he would eventually be overtaken by Jeff Trombley, in the 3A Warren’s Auto Body Car as well as a strong pass from Josh Pieniazek.

Warren Connecticutt’s Peter Dance would spin his RCE Machine Works 56D with six laps remaining in the feature. This would bring out the only yellow of this event. When green flag racing resumed, Kyle Smith would be able to set sail and power his D&D Auto Supply, Taylor Propane, John Matrafailo-owned 17 car to Fonda Speedway Victory Lane. This would be his second feature win of the 2017 season. His first win came at Afton Motorsports Park earlier in the season.

Jeff Trombley would work his way to a second place finish. This would make Trombley the Kennedy’s Towing Northway 90 Series Points Champion.


Josh Pieniazek would earn his way to the podium with a third-place run in his JGS Hauling & Recycling number 9 entry. This also earned Josh the Powdertech Coatings Hard Charger Award. He would work his way to third from tenth starting position.

The Super Gen Products/Champion Power Equipment CRSA Sprint Tour continues their journey with two more events on the 2017 season. They stop at Afton Motorsports Park on Friday, October 6th as part of the Short Track Super Nationals Weekend. The tour will then finish the season on Saturday, October 21st at Orange County Fair Speedway during Eastern States Weekend. Fans and teams can go to crsasprints.com for more information on these events and the close-out of the 2017 season.