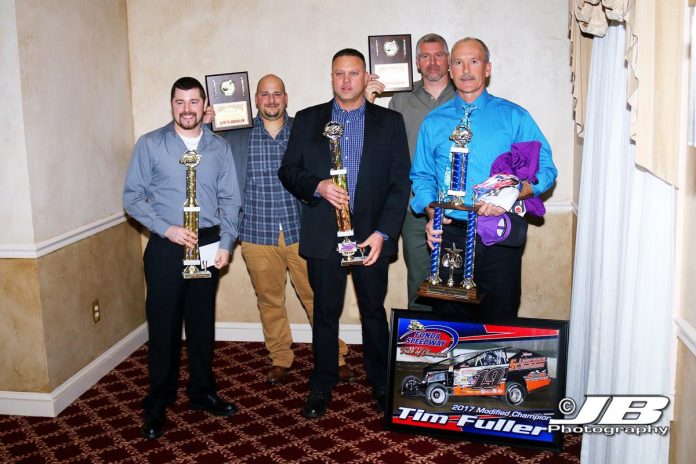 ROTTERDAM, NY – The management of the “Track of Champions” Fonda Speedway put a period on the 2017 racing season at Mallozzi’s Restaurant in Rotterdam, NY on Saturday evening with the annual awards banquet honoring the track champions in their respective divisions and other members of the Fonda Speedway staff as well.

“Thank you all for coming tonight as we celebrate with the champions and all of the people that raced with us all year in 2017,” Fonda Speedway promoter Pete Demitraszek said to the crowd to open the event.

The Mallozzi’s staff then served up a wonderful buffet style meal followed by Mike Mallett who emceed the event as the award winners were called to receive their hardware.

First off were the top five in the Limited Sportsman division final point standings (5th to 1st) EJ McAuliffe, Larry Niemiec, Kathy Bellen, William August, and the 2017 Track Champion Cory White who won the first track title of his career at Fonda.


“This is a dream come true,” White said after accepting the award. “I used to sit in the grandstands as a kid and without any wins last year I didn’t really expect this. But once your name is in the record book nobody can take it away from you.”

Next up was the Street Stock division top five in final points (5th to 1st) including Harold Chadderdon, Steven Young, Jim Groncki, Cliff Haslun, and first time Track Champion Johnny Young who won five feature events in 2017 on his way to the track title.

“I tried hard to win every night but it wasn’t always that easy,” Young said. “Hopefully in 2018 they will be a little bit easier to come by.”

“It’s unbelievable to hear that this is our sixth championship here at Fonda,” Gates said. “When I started I was just hoping to win one feature event at Fonda but there is no place I’d rather be on a Saturday night.

For Warner it was his fourth consecutive championship in the division to go along with his two Street Stock championships in 2005 (co-champion) and 2007 and his Pro Stock championship in 2011. Warner also currently sits at the top of the all-time win list in the 602 Sportsman division with a total of 25 victories. For the 2018 racing season, Warner will be moving up to the Modified division in the Jake & Nancy Spraker owned #1J.

“The Sportsman division is a great class at Fonda with a lot of great competitors,” Warner said. “I have to thank Jake & Nancy Spraker and my family for standing by me 100% because racing as much as we do is tough on everyone.”

“I don’t think I’ve ever finished in the top five every week anywhere that I have raced during my career and to do that last year and win a Track Championship at a historic place like Fonda I am very fortunate,” Fuller said. “Jack (Johnson) is one of my heroes and to win a feature race and a Track Championship where he did is very special to me. I have to thank Pete and his staff at Fonda, he pays in real money and runs a good show.”

Terri Mohrman was honored with a plaque for her 35 years of service and commitment to the “Track of Champions” on the Track Safety Crew while Bob Lansing, George Smith, and Dan Seelow were the other special award winners.

The focus for the Fonda Speedway track crew now shifts to the opening race of the season, the annual Ice Jam event paying $5,500 to win for the Modifieds along with all other divisions in action as well as points begin on that day, Saturday, April 21 with a 4:00 p.m. starting time. Two practice sessions are also on the schedule for Saturday April 7 and 14 weather permitting also with a 4:00 p.m. starting time.